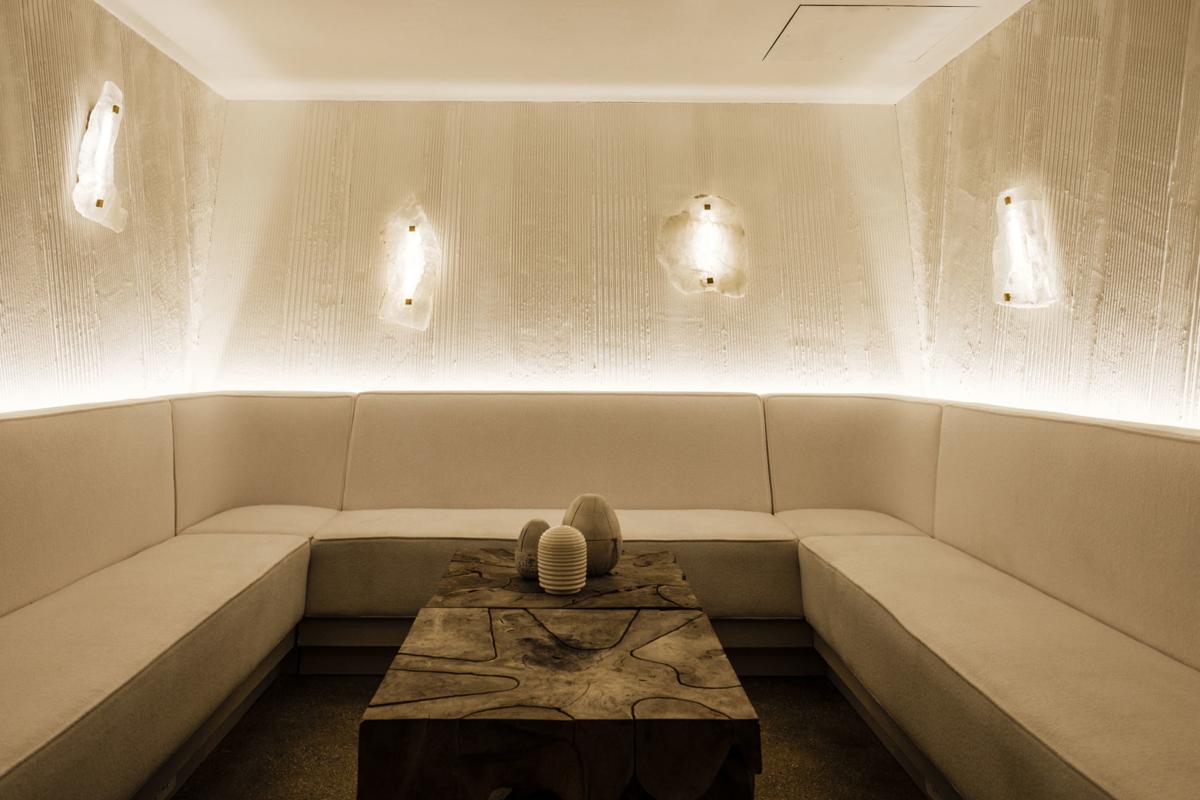 The relaxation room of the Well, a members-only wellness center, is pictured Jan. 29 in New York. 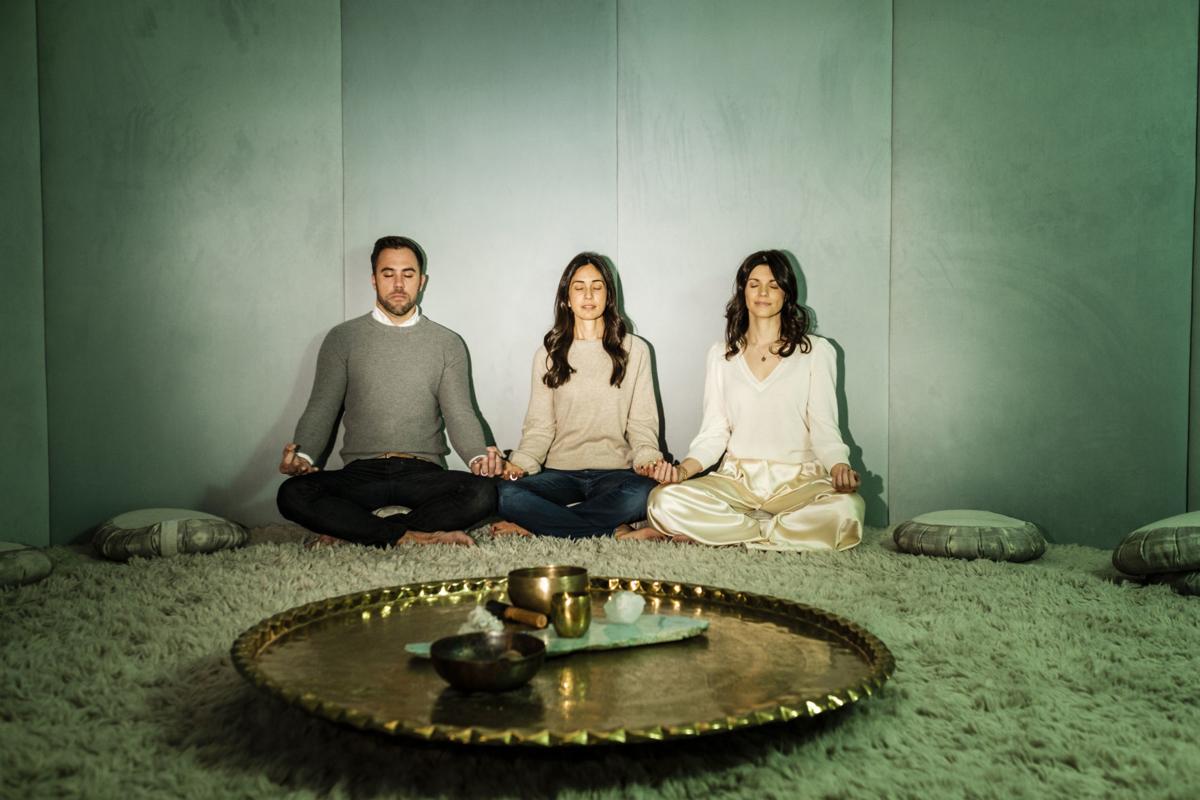 Kane Sarhan, from left, Rebecca Parekh and Sarrah Hallock, founders of the Well, are pictured in the club’s meditation dome Jan. 29 in New York.

The relaxation room of the Well, a members-only wellness center, is pictured Jan. 29 in New York.

Kane Sarhan, from left, Rebecca Parekh and Sarrah Hallock, founders of the Well, are pictured in the club’s meditation dome Jan. 29 in New York.

NEW YORK — First, we consult with our health coach, the wallpapered walls of her office making it feel like a Monet water-lilies womb, to share our health history and goals because this is the person we need in our lives when the medical system is broken, Big Pharma has become the enemy and wellness is everything.

We have arrived at the wellness club, a dazzling ivory-and-greige temple of self-care called — what else? — the Well. As co-founder and CEO Rebecca Parekh says, “We’re all on a health journey, and we need to take greater agency of our own health.”

And so the journey begins by turning inward toward our innards.

The $18 million, bi-level space opened in September as “an ecosystem of wellness,” incorporating ancient, non-Western practices (acupuncture, ayurvedic, yoga) with traditional medicine (consulting staff physicians), “support circles” (group therapy), personal conditioning and spa services. The Well is about bone broth, marine bioactive mouthwash, a $225 facial serum that smells like vinegar because this moment is all about fermentation, and a lovely guy named David who holds our ankles for 10 minutes, then cradles each toe during a private craniosacral therapy session ($170 for members) so that the body is aligned, all is right in the world and we can get on with our purpose.

Funded by private investors and venture capitalists, the club resembles a boutique hotel, without beds: a zen concierge space featuring artisanal products for sale, a restaurant, a library, a “mindful movement” studio for yoga, and a traditional gym, though a tiny one. The reflexology lounge hosts “Happy Feet Happy Hour,” when members receive individual treatments while resting in Eames lounge chairs and enjoying a glass of biodynamic, organic, sulfite-free wine.

You feel like a better, healthier, taupe cashmere-sweatered version of yourself just by being here. This place goes way beyond a Fitbit tracker and eight daily glasses of water. The Well, like a few other new, high-end membership spaces, is essentially a physical manifestation of Goop, Gwyneth Paltrow’s digital Xanadu and Netflix laboratory of finer living and products. It’s health repurposed as necessity and luxury, a destination to enforce a daily regimen of rigor and pampering. And, its founders hope, the concierge wellness club will be our future.

“We’re going to reinvent health care. We’re not just some pretty spa with great massages and really great green juice,” says co-founder Kane Sarhan. “We want to change the conversation. This is the first step in building a brand.”

The Well is aspirational in that it costs $5,000 a year ($3,020 for ages 32 and younger). Services such as massage, acupuncture and vibrational energy healing cost extra — less for the 500 members, 65% of them women, but extra. The club plans to cap membership at 2,000, but anyone is welcome to visit for a service or a meal.

The Well is, well, about a lot of things.

It’s about control, paying a premium for faster access to superior experts at the member’s convenience — flying private in a world of commercial health care.

It’s about belonging to a club of like-minded, affluent seekers of a more directed life. It is about entertainment and enlightenment, with “curated weekly programming” that includes evening seminars, movies, mixers and a meet-and-greet conversation with presidential hopeful Andrew Yang.

“People are lonely and yearning for community and a greater sense of purpose,” Parekh says. Many Americans no longer attend places of worship. The affluent have eschewed fusty country and civic clubs. Typical health clubs can be noisy, germy, crowded and impersonal, a vortex of insecurity. They seem neither clubby nor healthy.

The Well is about creating a prototype to be duplicated in cities where disposable income flourishes — founders Parekh, Sarhan and Sarrah Hallock mention Los Angeles, Miami, a second New York City location — and potentially downscaled for places less flush. (And, possibly, imitated by others.) They’re expanding the community online. In January, the Well launched a four-week, online “holistic reboot” course, drawing an enrollment of 150 from as far as Australia and Turkey.

Wellness is a relatively modern term — first coined by biostatistician Halbert L. Dunn, author of the 1961 book “High Level Wellness” — but the roots are ancient. Its various health initiatives often start with people of means before being adopted by the general public. “It takes a lot of bucks to stay well,” says University of Michigan medical historian and physician Howard Markel. “The people seeing the great ancient doctors weren’t slaves. They were the wealthy.”

The Well is the latest endeavor in humans’ Sisyphean effort to stave off illness, infirmity and, though the word is rarely uttered in the wellness world, death.

“We all want to live forever,” Markel says. “If I can use my narcissism and wealth to avoid the slings and arrows of outrageous fortune, then I’ll do it.”

Late-19th- and early-20th-century America was also a time of rigorous “biologic living,” but with religious roots. The elite Battle Creek Sanitarium in Michigan, devoted to calisthenics, hydrotherapy and gut health, was founded in 1878 by John Harvey Kellogg, a physician obsessed with regular, splendid bowel movements, especially his own. Kellogg, building on Seventh-day Adventist practices, sagely warned against meat, alcohol, tobacco, sugar, caffeine and a sedentary lifestyle, as Markel writes in his book on the topic, “The Kelloggs: The Battling Brothers of Battle Creek.” The period gave rise to chiropractic and osteopathic medicine, nutritional diets and the rapid expansion of the YMCA.

Today, we are trying to conduct simple (Marie Kondo), balanced, active and mindful lives (with gadgetry and apps and more apps). The Well is part of the growing innovation of membership organizations that purport to provide wellness values — for a price. In Manhattan alone, there’s Highcourt, scheduled to open this summer, with a $3,600 annual membership and promoted as “five floors of unadulterated off time” and “intelligent leisure,” going so far as to trademark the latter. The three branches of the Assemblage (as well as an Upstate nature retreat) include not only meditation rooms and wellness classes but apartments, collaborative workspaces, community and cultural programming and, naturally, a podcast studio — the intended goal a “collaboration for the future of humanity.”

The Well’s founders, entrepreneurs in their 30s and early 40s with backgrounds in branding, finance, hotels and Deepak Chopra, believe that the Well is distinct because of its personalized, sustained attention toward health — the kind of attention people crave yet rarely receive. Parekh hatched the idea more than a decade ago, after returning from an Arizona spa and wondering why people couldn’t access the same services daily in New York.

“It is groundbreaking to have practitioners across modalities in an integrated basis,” Parekh says. “This is the way people will practice medicine across the county. I think it has to happen. The only way we deal with a health care crisis is a healthier population.”

She mentions the opioid epidemic, the obesity crisis and poor diets, all of which feel miles away. Well members appear stunningly fit, paragons of health. Markel deems them “the worried well,” people who make time to attend early evening meditation classes or noontime workouts. The Well is a place for members to slow down and yet, ironically, another destination to rush to, where digitally detoxing can sometimes prove a challenge. During a visit to the trippy relaxation lounge — the designers were inspired by Lex Luthor’s Kryptonite cavern — a robe-swathed member was pecking intently at her laptop.

“In this culture, we have to move faster. I think it’s literally making us sick,” says member and investor Reshma Saujani, founder and CEO of the female-empowering organization Girls Who Code. She visits the Well three times weekly for acupuncture, lunch, yoga, meditation — in addition to working out with a personal trainer at a different gym several times a week. (Oh, and her second child was due just days after this interview.) “It’s almost like a sanctuary, a place that is incredibly calm and focusing. As an activist, I can’t inspire, I can’t change the world, if I’m tired and anxious and stressed. It’s helped me be a better leader and activist.”

The circular, celadon, shag-carpeted meditation dome is tricked out with crystals and a James Turrell-like light installation. At 5:30 p.m. on a recent Tuesday, the class is packed, a dozen women in the latest athleisure and one guy in a suit. He apologizes for the suit. No worries. The Well is a place of acceptance. Our instructor introduces herself as a former international runway model, the second one we encounter in a day.

Commercial real estate adviser Alessio Tropeano, 30, is at the Well almost daily. He loves the health coaching, the yoga, the holistic approach. He’s made new friends.

The Well has “changed my mind-set. It’s forced me to take the time out of my day to focus on myself,” he says, adding: “It’s more like I’m a project and we’re working on the project together.”