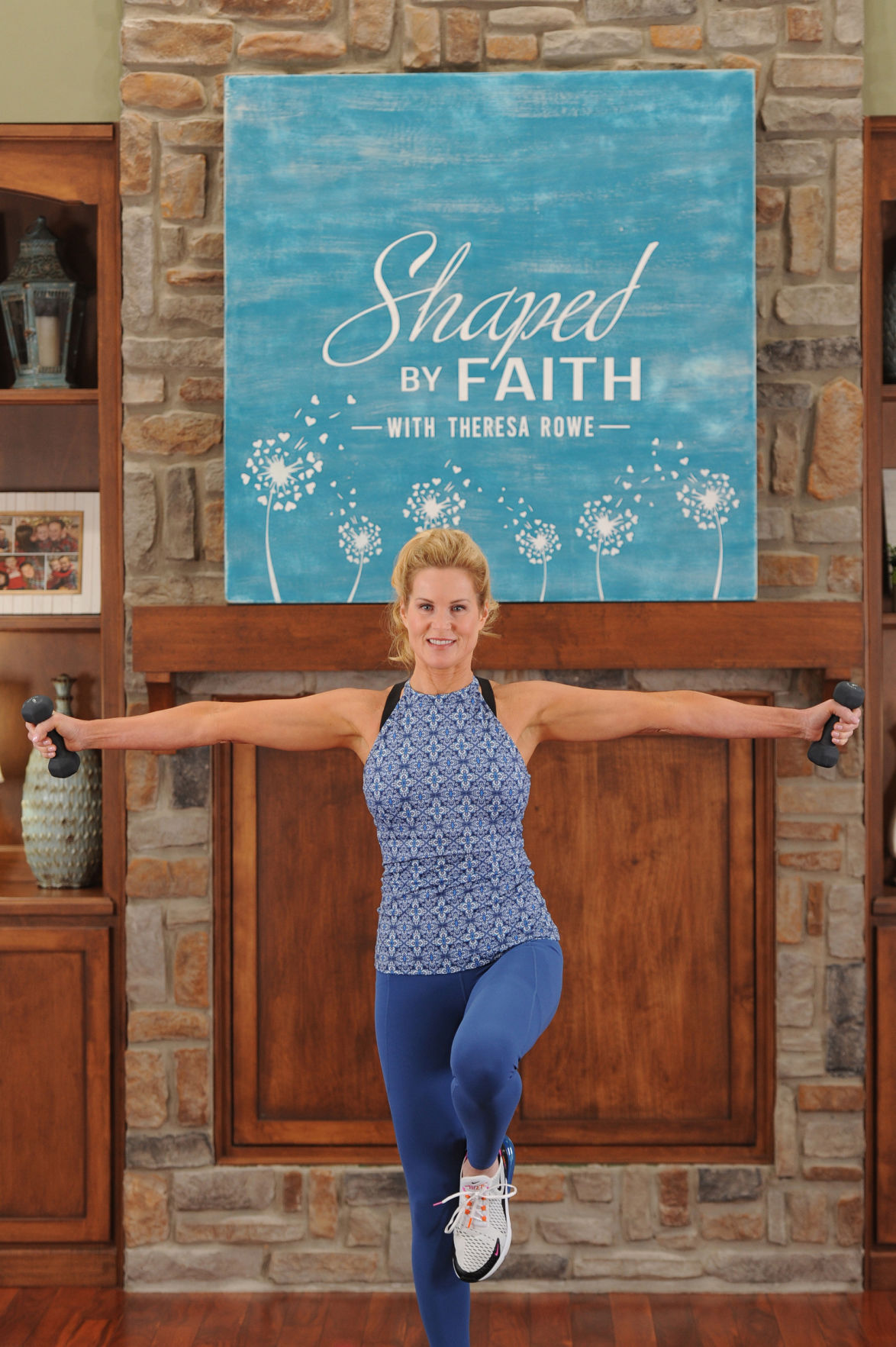 Theresa Rowe works with dumbbells during the filming of Shaped By Faith with Theresa Rowe.

Theresa Rowe, left and Randy Lanham, right, work together on final details before the filming of Shaped By Faith with Theresa Rowe.

Theresa Rowe works with dumbbells during the filming of Shaped By Faith with Theresa Rowe.

Theresa Rowe, left and Randy Lanham, right, work together on final details before the filming of Shaped By Faith with Theresa Rowe.

For years, personal coach and fitness instructor Theresa Rowe has been a prolific media creator, covering everything from the printed page to the digital landscape.

She’s produced a motivational book, inspirational music CDs, a wide range of fitness DVDs, a column for the Messenger-Inquirer, and adding to Rowe’s ever-building resume is her faith-based exercise show, “Shaped by Faith,” which wrapped up its fourth season this week.

“Shaped by Faith” is a 30-minute exercise television show that combines a standard televised workout routine with a faith-based theme.

It currently reaches an audience of over 45 million through eight domestic television stations such as NRB TV, Inspiration TV and Parables TV, online at Global7.TV and internationally on Healthy Living Channel in Albania and in India later this year through Grace TV India.

Not only is “Shaped by Faith” the title of Rowe’s aerobic show, but it’s also the name of the ministry that she said God founded through her at age 26 when she became a Christian.

This transformation happened when Rowe left Omaha, Nebraska, after coming out of open-heart surgery, to teach a fitness class in Owensboro.

During one of her classes, a student of hers asked to pray with Rowe, saying God wanted her to pray to help heal Rowe.

“I politely dismissed the prayer, believe it or not,” she said. “I actually had to pick up my younger daughter at preschool, so I just said, ‘I’ve got to go, and maybe we can do this some other time.’ ”

That afternoon, the student came by Rowe’s house and knocked on the door. Rowe looked through her peephole to find the student on the other side, and was hoping she’d leave, but the student kept knocking.

When Rowe opened the door, the student said that Rowe must have thought she was strange for coming to her instructor’s home, but she had to be obedient to God.

Rowe reluctantly let the student into her main hallway to pray, and it opened Rowe’s heart to God. After that day, she began intertwining Bible passages and personal stories of inspiration into her workout sessions to help inspire and shape her audience through God’s Word.

Years later, Rowe took this faith-based approach and developed the first season of the television show by the same name, which began airing Oct. 1, 2019.

While writing the exercise programs for each show, she asked herself what would she want someone to talk about with her or about the dealings in her life that she needed to be encouraged in. These questions helped Rowe theme episodes such as hope, faith, fear, depression and anxiety.

“So in season four, I have a lot of them themed like ‘Who We Are in Christ,’ like talking about our identity, (and) talking about forgiveness. I think that’s a big one, especially right now,” she said. “I think forgiveness is a big area where we all could do some more work in, so I themed a show forgiveness.”

Other themes that season four will center on are our bodies and how what the Word of God says about them and prayer.

And while some televised exercise programs set their location in a yoga studio or a serene tropical setting, Rowe records and performs “Shaped by Faith” in her Calhoun home, because it’s a comfortable and relatable place for her viewers.

“I wanted people to feel comfortable when they watch the exercise show,” Rowe said. “I’m an ordinary lady that is bringing them exercise. I’m not trying to be a superstar or anything like that. And I just feel that it makes a person feel more comfortable just knowing (the show’s) in someone’s home so that when they are working out with me, they’re certainly working out in their home and most likely not a studio or a gym.”

Rowe had other locales in mind, but when she prayed about it, she said God kept telling her to do it in her home. When Rowe recorded the pilot episode and sent it to the television executives, they accepted it and liked the idea of the show being in a home setting.

With three seasons strong and a fourth in the editing bay, both new and longtime audience members can catch up and sweat it out to the previous seasons through a number of websites online before the new season airs later this year.

As for Rowe, she has no plans to stop producing “Shaped by Faith.”

“I’ll do as many of these as I can. This is a big part of what I’m supposed to be doing right now,” she said.

Nirvana's Nevermind: 10 facts you never knew about the iconic album

Wisconsin vs. Notre Dame football: 3 keys to victory, why the Badgers' running game matters so much and a prediction