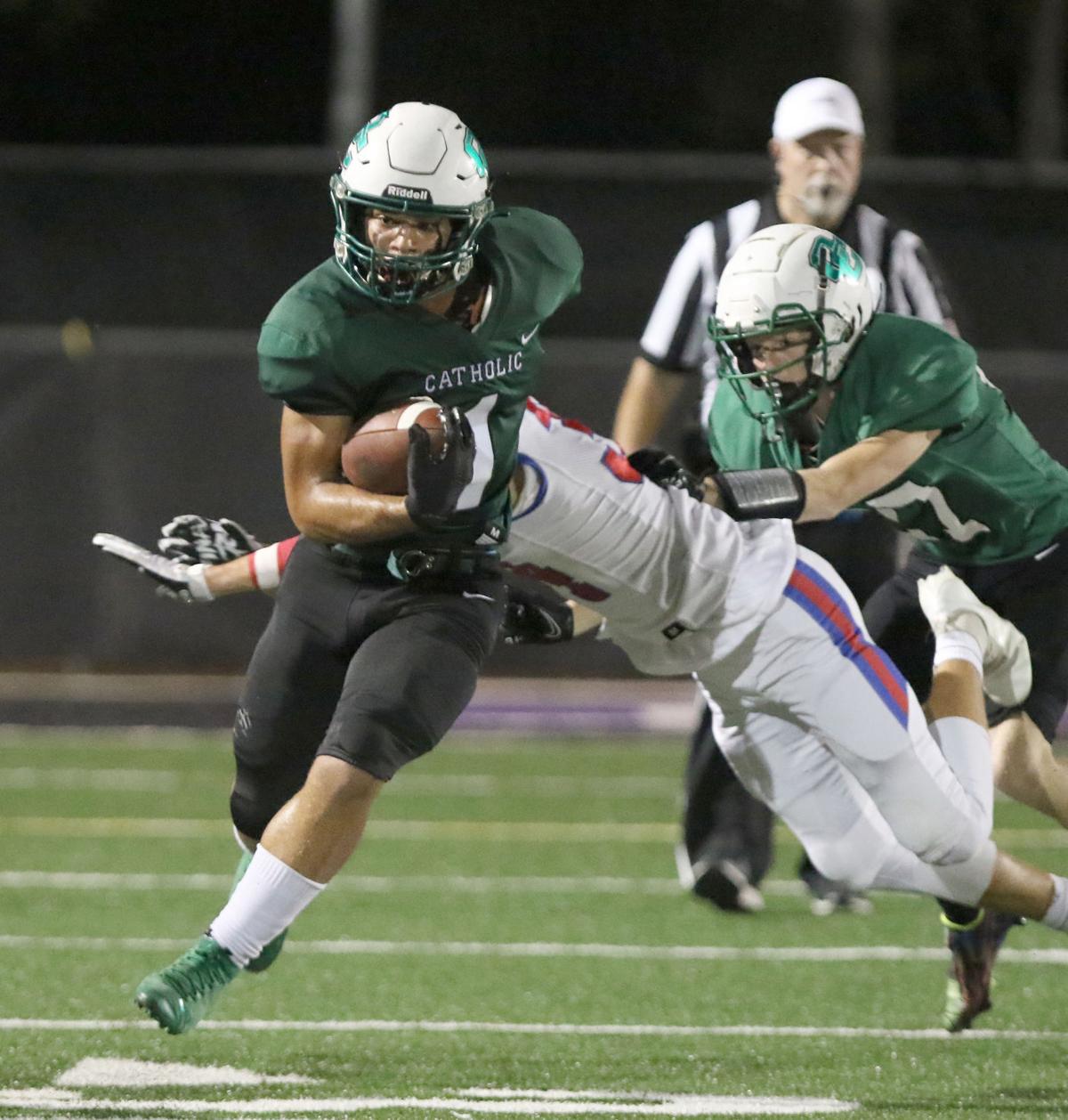 Above left: Owensboro Catholic’s Braden Mundy turns the corner on a run against Louisville Christian Academy’s Chase Geren during last week’s game at Independence Bank Field at Steele Stadium. Above right: Hancock County’s Kaleb Keown runs with the ball during a practice at the school on Aug. 5. 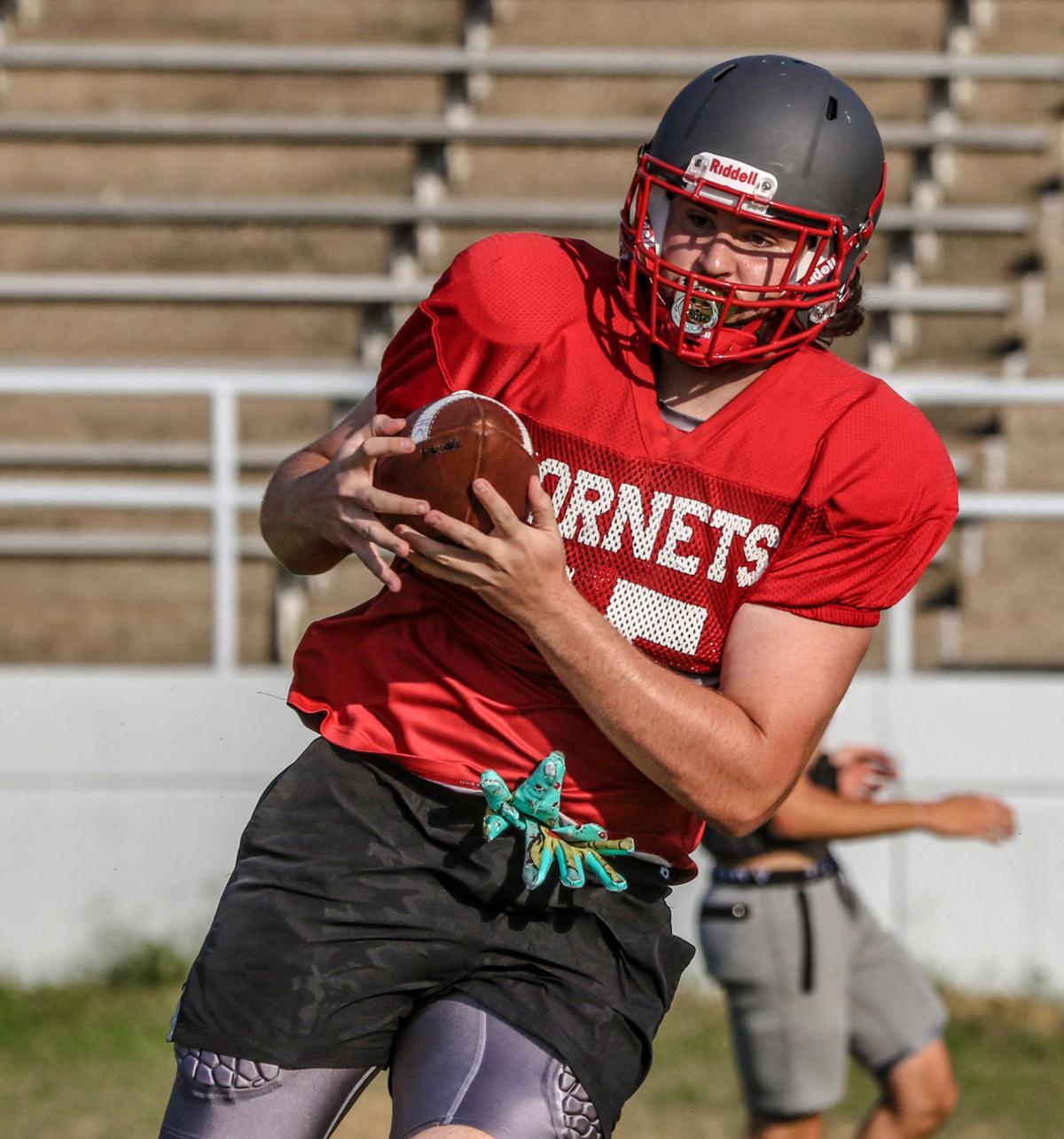 Hancock County’s Kaleb Keown runs with the ball during a practice at the school on Aug. 5.

Above left: Owensboro Catholic’s Braden Mundy turns the corner on a run against Louisville Christian Academy’s Chase Geren during last week’s game at Independence Bank Field at Steele Stadium. Above right: Hancock County’s Kaleb Keown runs with the ball during a practice at the school on Aug. 5.

Hancock County’s Kaleb Keown runs with the ball during a practice at the school on Aug. 5.

Last fall, Owensboro Catholic and Hancock County rekindled a feisty Class 2-A football rivalry, with the Hornets winning a 30-29 regular-season decision and the Aces prevailing 27-26 in the second round of the KHSAA playoffs.

Both games were in Hawesville.

On Friday, the scene shifts to Steele Stadium — the home of the Aces — but the stakes remain high for two teams hoping to win this year’s district championship.

“This rivalry dates back a long time,” said Owensboro Catholic head coach Jason Morris, a star quarterback at Hancock County during his playing days. “I can remember coming into Rash Stadium (then the Aces’ home field) and facing Catholic — it was always a big game, and it still is.”

Catholic, a young team that went 0-5 against a rugged pre-district schedule, is hoping the challenging slate has it well-prepared for Class 2-A district competition.

“I believe our early-season schedule has more than prepared us for the upcoming district games,” Morris said. “We are a young but talented team, and I believe we’ve learned a lot about ourselves in the run-up to the district schedule.”

“They have a very talented team,” Morris said of Hancock County, which opened the season with four consecutive victories before falling 27-14 to visiting Crittenden County a week ago. “They play so hard on the offensive and defensive lines, and they’re really good on both sides of the ball inside the tackle box.

“Their quarterback, Cole Dixon, is a great athlete who allows them to be effective outside the tackle box.”

The Hornets are led by hard-charging fullback Logan Willis, a workhorse who carried the ball 34 times for 133 yards against Crittenden County. For the season, Willis has rushed for 838 yards and 10 touchdowns.

College football on TV: This week's lineup and your best bets

On the flip side, Hornets head coach Bobby Eubanks fully understands that Catholic is better than its record might indicate.

“They’re a good football team, for sure,” Eubanks said. “We know we have to be ready to play, and I believe our guys will be ready to play — this is always a big game on the schedule.”

Priority No. 1 for the Hancock County defense will be keeping the Aces’ multifaceted senior standout Braden Mundy in check.

“We have to contain Mundy,” Eubanks said. “He’s explosive anytime he has the ball, and, really, anytime he’s around the ball. He’s just one of those very talented players you have to keep in front of you. Once he gets behind you, it’s real trouble.

“Also, Lincoln Clancy has recovered nicely (from a shoulder injury) for them at quarterback.”

Mundy leads the team with 19 receptions for 346 yards and three TDs, Hunter Monroe is the leading rusher (222 yards, TD), and Clancy has completed 42-of-78 passes for 704 yards and five touchdowns.

“Ball control will be important for us in this one,’ Eubanks said. “We’d like to put together long, sustained drives as much as we can.”

Wisconsin vs. Army football: 3 keys to victory, who should get the carries for the Badgers and predictions

Watch now: Scott Frost says 'everything we got will be poured into' Minnesota game

Two-Minute Drill: How does Nebraska go about slowing down Minnesota's running game?

Andrew McCabe on Trump: I don't care what that guy has to say