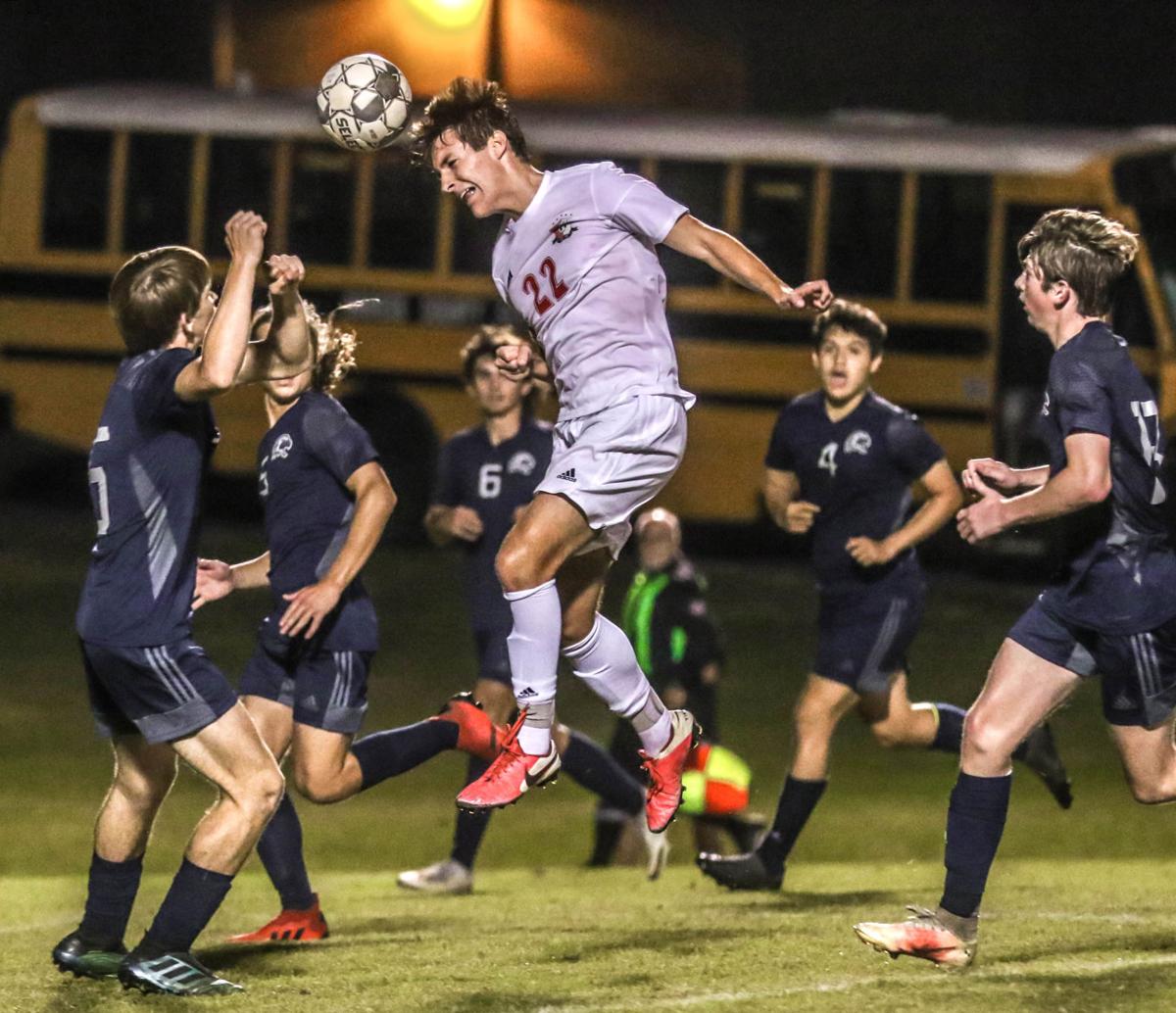 Above: Daviess County’s Tanner Andersen heads the ball during

the second half against Ohio

County on Tuesday during the 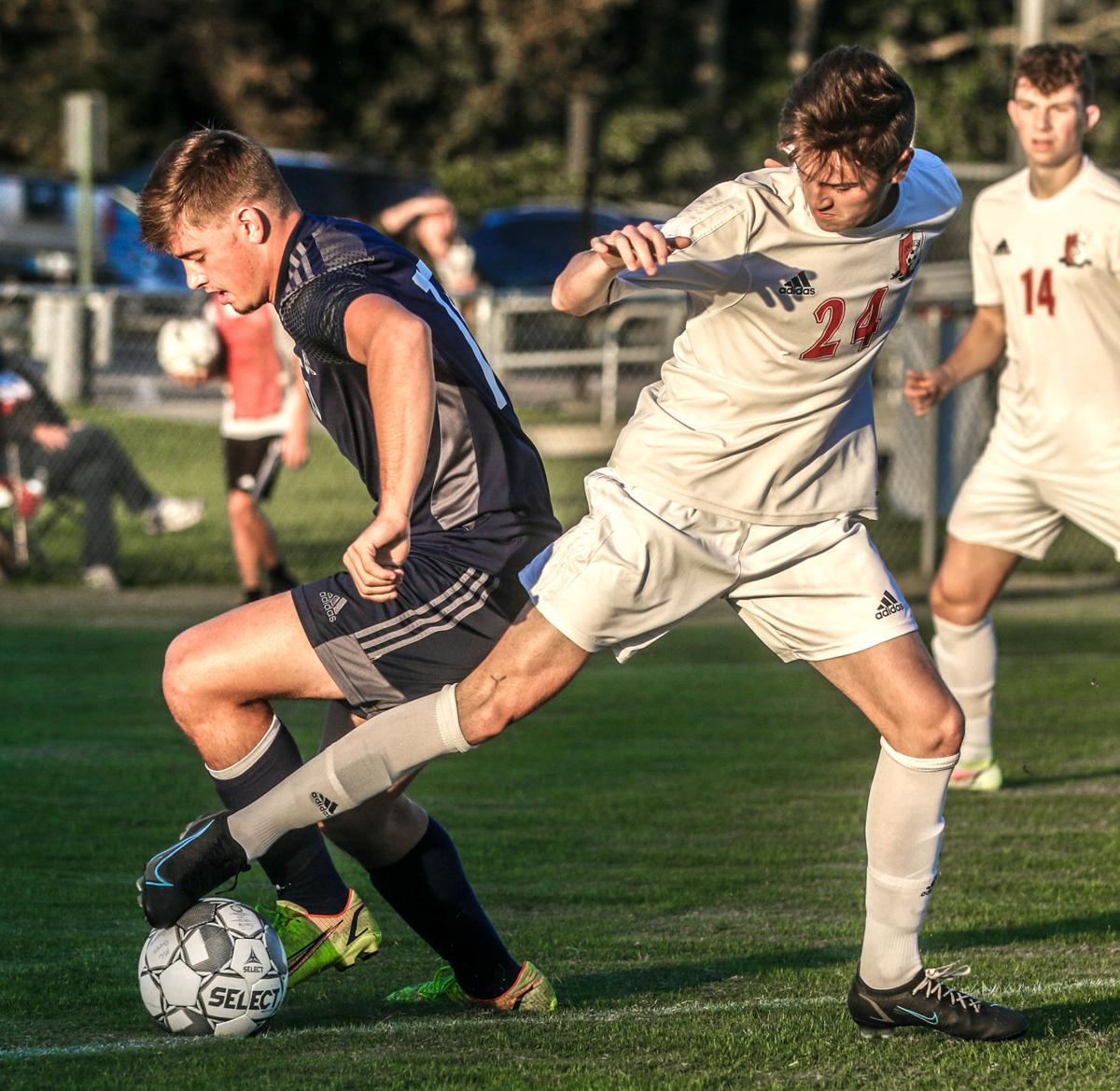 Daviess County’s Sean Higgs (24) fights for possession of the ball with Ohio County’s Brett Hoskins on Tuesday during the 3rd Region Soccer Tournament semi-finals in Brandenburg. 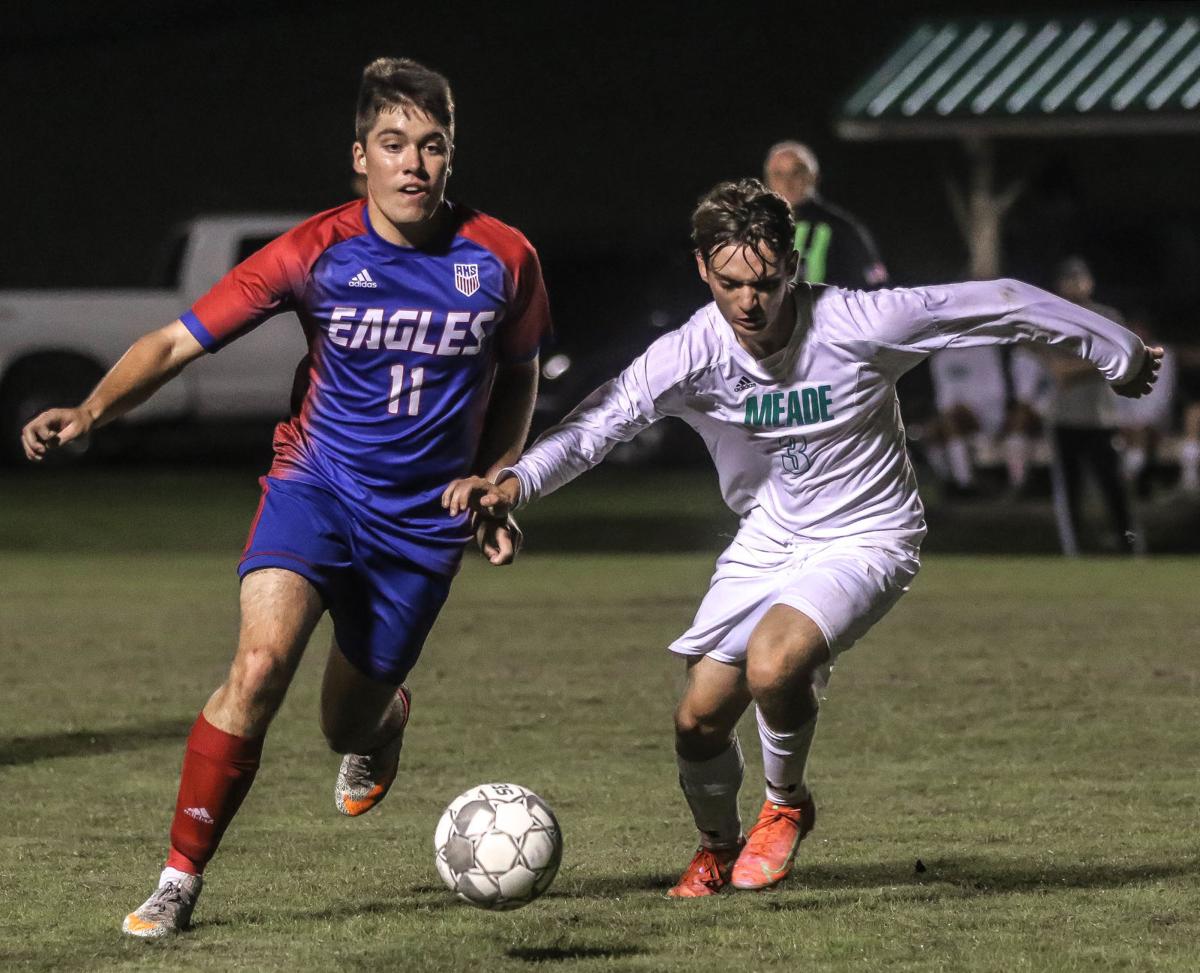 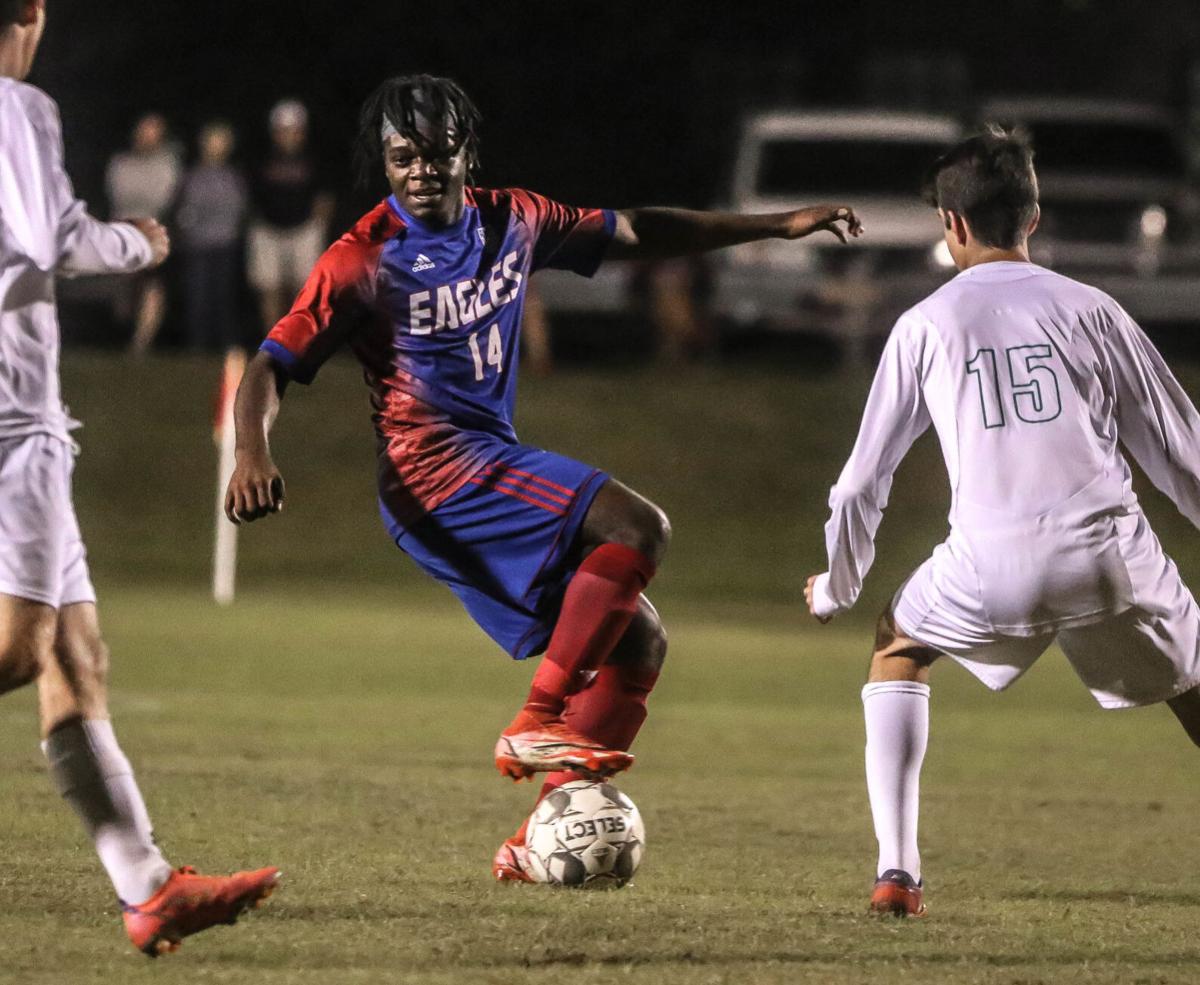 Above: Daviess County’s Tanner Andersen heads the ball during

the second half against Ohio

County on Tuesday during the

Daviess County’s Sean Higgs (24) fights for possession of the ball with Ohio County’s Brett Hoskins on Tuesday during the 3rd Region Soccer Tournament semi-finals in Brandenburg.

They will go again in the 3rd Region Boys Soccer Tournament championship game on Thursday at 6 p.m.

Daviess County was in a tight matchup at halftime against Ohio County.

The Panthers made a few connections in front of the goal in the second half, and they were able to escape.

Carson Thomas scored a hat trick for Daviess County, netting the team’s first goal from 25 yards in the 15th minute.

Ohio County made things interesting just before halftime when Levi Hepner finished a great through ball with 45 seconds to go before the break.

“It kind of made us hang our heads a little bit,” DC coach Doug Sandifer said. “You kind of get lulled to sleep in the back a little bit when teams are doing what they did. Our guys were probably not as sharp, they got the one counter they wanted and got a goal out of it. Then it’s back to 0-0.

“Give them credit, they made it very difficult. We tried some different looks and started getting a few loose chances. Against that crowded of a box, I don’t know what you do other than try to serve some dangerous balls in, there’s not even room to combine in there. We did a better job in the second half of creating opportunities from our serves out wide.

“Some games are going to go like that this time of year. Alex (Tungate) did a great job of setting his team up to give them a chance.”

Ohio County didn’t put much pressure on Thomas in the opening minutes of the game.

“At the beginning of the game, we didn’t create chances very well, but we picked it up,” Thomas said. “The second goal was what we were trying to do — serve it in, a dangerous serve right in front of the goal.

‘I still own you!’ Packers, Aaron Rodgers continue dominance of Bears in 24-14 win

“That was probably my fourth shot with them not pressuring me, and it finally went in. After that, they stepped up.”

Thomas scored his second goal off a great serve from Andrew Alexander. DC didn’t get much of that kind of passing to the box in the first half.

A second handball in the box by Ohio County set up Thomas’ final goal, which came on a penalty kick in the 71st minute. DC had missed a PK earlier in the second half.

“Carson, the first shot was a nice shot, he had a couple before that, third time was the charm,” Sandifer said. “We get out of here with a win. That’s all you want to do, move on and advance.”

Teranse Twihenya got a short pass from Dah Hai and hit from 15 yards to put Apollo up 1-0 in the 32nd minute.

Harrison Bowman had done a lot of work in the first half to try and get the Eagles in scoring position, and Bowman was able to get a finish off the post in the 44th minute to put them up 2-0.

A couple of minutes later, Houston Collins got loose on a run and scored close in for a 3-0 lead.

Meade County got an answer from Peyton Johnston off a deflection in the 50th minute to cut the deficit to 3-1.

Hsa Than scored on a deflection in the 68th minute to put Apollo in command 4-1.

Elbert Moo added another goal on a PK to finish the scoring for Apollo.

“We got a couple, then it opened up a little when we got some more, we scored some and started getting some confidence,” Apollo coach Ryan Poirier said. “The last 15, they were really pushing at us. We shored it back up, keep playing. The second half, we kind of wore them down.”

DE Crall on Chambers: That guy is a warrior

'Not surprised:' Lawmaker reacts to Trump suing her committee

Dr. Wen on what Colin Powell's death teaches us about vaccines