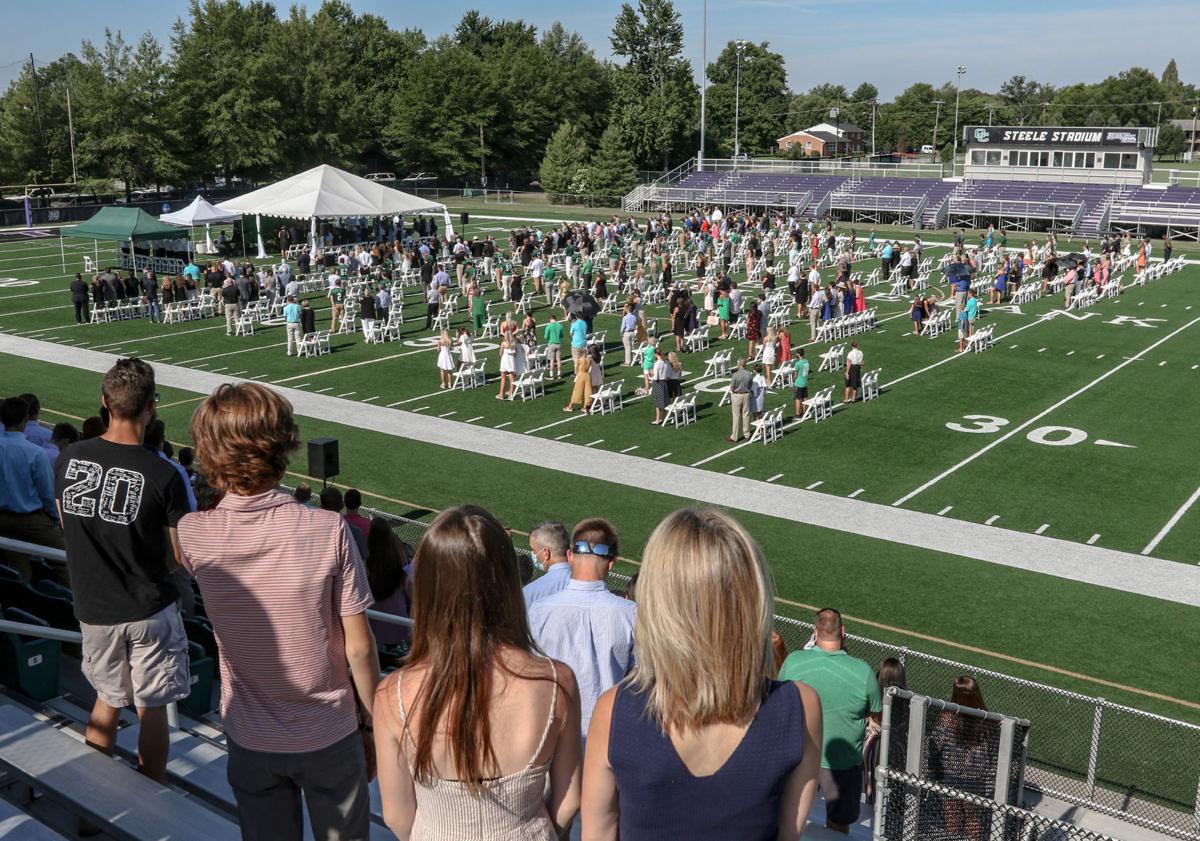 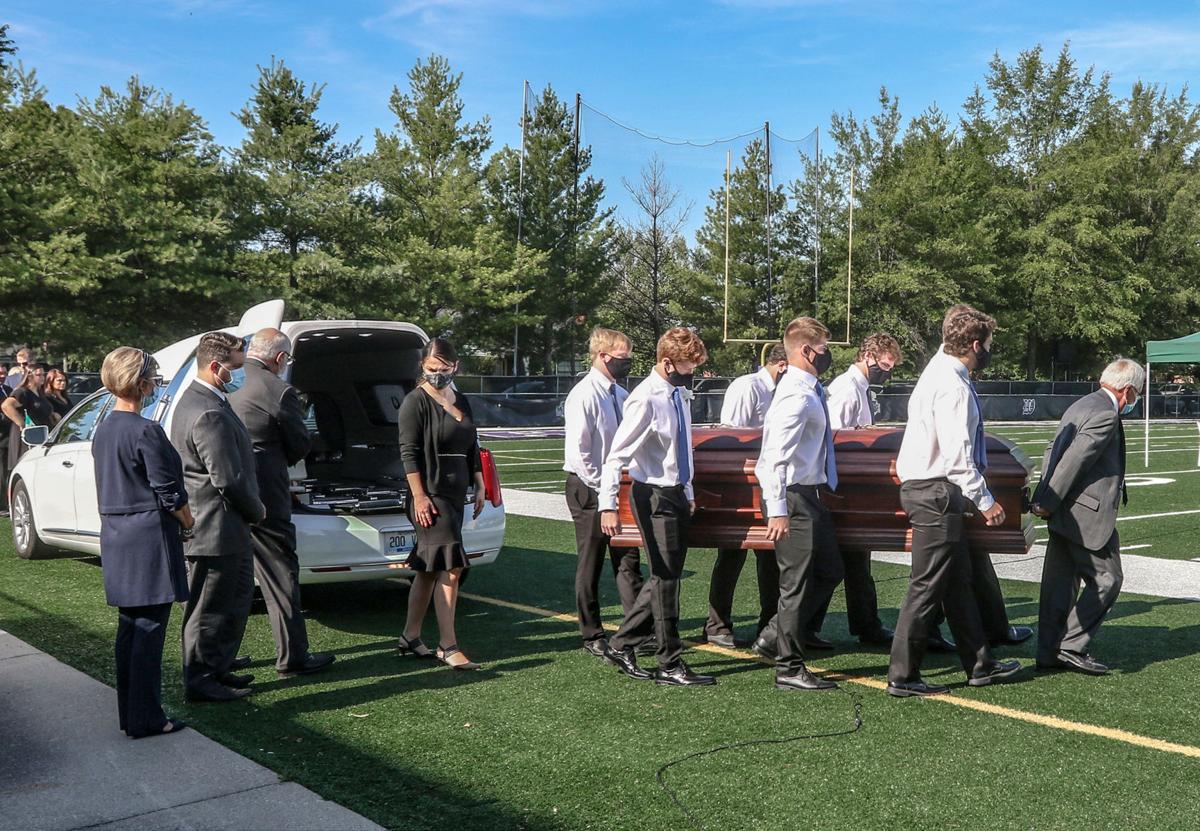 Logan Davis’ tight-knit group of friends, the Bros, serve as pallbearers Wednesday during the funeral Mass held for Davis at Steele Stadium.

Logan Davis’ tight-knit group of friends, the Bros, serve as pallbearers Wednesday during the funeral Mass held for Davis at Steele Stadium.

A gleaming white hearse turned off College Drive, entered through the south gates and slowly circled the field where Logan had toiled as a 6-foot-3, 320-pound lineman for the Owensboro Catholic High School football team.

Logan’s tight-knit group of friends, The Bros, served as pallbearers, and once the hearse had come to a stop, they carried his casket to a position between the 20- and 25-yard lines at the south end of the field, beneath a large white tent adorned with green ribbons.

A song played that included the lyrics,”Jesus, remember me when I come into your kingdom.”

What followed in the next hour’s funeral Mass was a remarkable tribute to a beloved young man who was wise beyond his years; possessing a gifted capacity to profoundly touch those around him with a generous spirit, infectious humor, unbridled faith and unconditional love.

Logan, who died at age 18 following a one-vehicle auto accident late Friday night, was uncommonly revered — and deservedly so.

“He was such a special kid,” said OCHS principal Gates Settle, wearing a black protective mask emblazoned with a green “#68” — Logan’s jersey number. “Yes, Logan played football, but that paled in comparison to everything else he was — this leaves a void on so many levels at our high school.”

Beneath a sunny blue sky, about 1,000 mourners gathered at Steele to pay tribute, including coaches and players of the Aces football team, wearing their green home jerseys.

The Rev. Jason McClure, campus chaplain at OCHS, delivered a moving, thought-provoking eulogy that included a host of highlights.

“His soul was pleasing to the Lord,” Father McClure said of Logan. “He was unashamed of his faith, not afraid to talk about Jesus — and he would share his faith. He lived his faith in everyday acts of kindness.”

Like many fellow Wildcats, Arizona safety Jaxen Turner is learning on the job

Such as texting his mother, Karla, each day to tell her he loved her and hoped she had a great day; being strong in his faith but non-judgmental; having a desire to learn and saying “Thank you” for even the smallest gestures; leading others to prayer and, in turn, to Jesus; having a strong conviction for the dignity of human life; and speaking freely and enthusiastically with young and old alike.

“He knew he was going to heaven,” Father McClure said. “Logan believed with a faith as strong as anyone I’ve ever seen — he didn’t just talk the talk, he walked the walk.”

Logan also kept a journal, and the words shared by McClure from it underscore the depth of that faith: “My God, my God, I love you. I love you. There are no words I can use to express my wanting to be with you in heaven, the goal and our destiny. I’m ready whenever you call my spirit home, it’s yours. I ask that when you call me home that everyone will be happy, not sad, for they will know that we love them. Until this moment I’ll keep praying. I’ll keep loving you even if it’s tomorrow or a thousand years.”

Logan also wrote a list of things he was thankful for, which included but were not limited to: my mom, my sister (Haley), friends, living in America, faith, grandparents, music, hugs, nice sunsets, good movies, helping others, working, smiles, laughter, pretty women, the ability to learn, the ability to think, the sound rain makes on a roof in the morning, the ability to feel my family in memory after they die, a warm blanket around my body, the Internet, belonging to a group, cool socks.

By the end of the service, it had become a little warmer, but as The Bros carried Logan’s casket from the tent to place it back in the hearse, a cooling breeze, as if on cue, swept through Steele Stadium; and one couldn’t help but wonder if Logan had something to do with that, considering his constant care and consideration for others.

A song with the lyrics, “Roll away the stone ... “ played softly.

Finally, the hearse pulled out of the stadium and was soon on to Resurrection Cemetery for the burial.

It was a sad occasion, true, but on a more spiritual level it was an inspiring one; filled with the eternal hope, joy and love that were such significant hallmarks in the extraordinary life of Logan Allen Davis — now glory bound.

'This is a really big deal': CNN analyst on SCOTUS ruling

When will business travel recover?