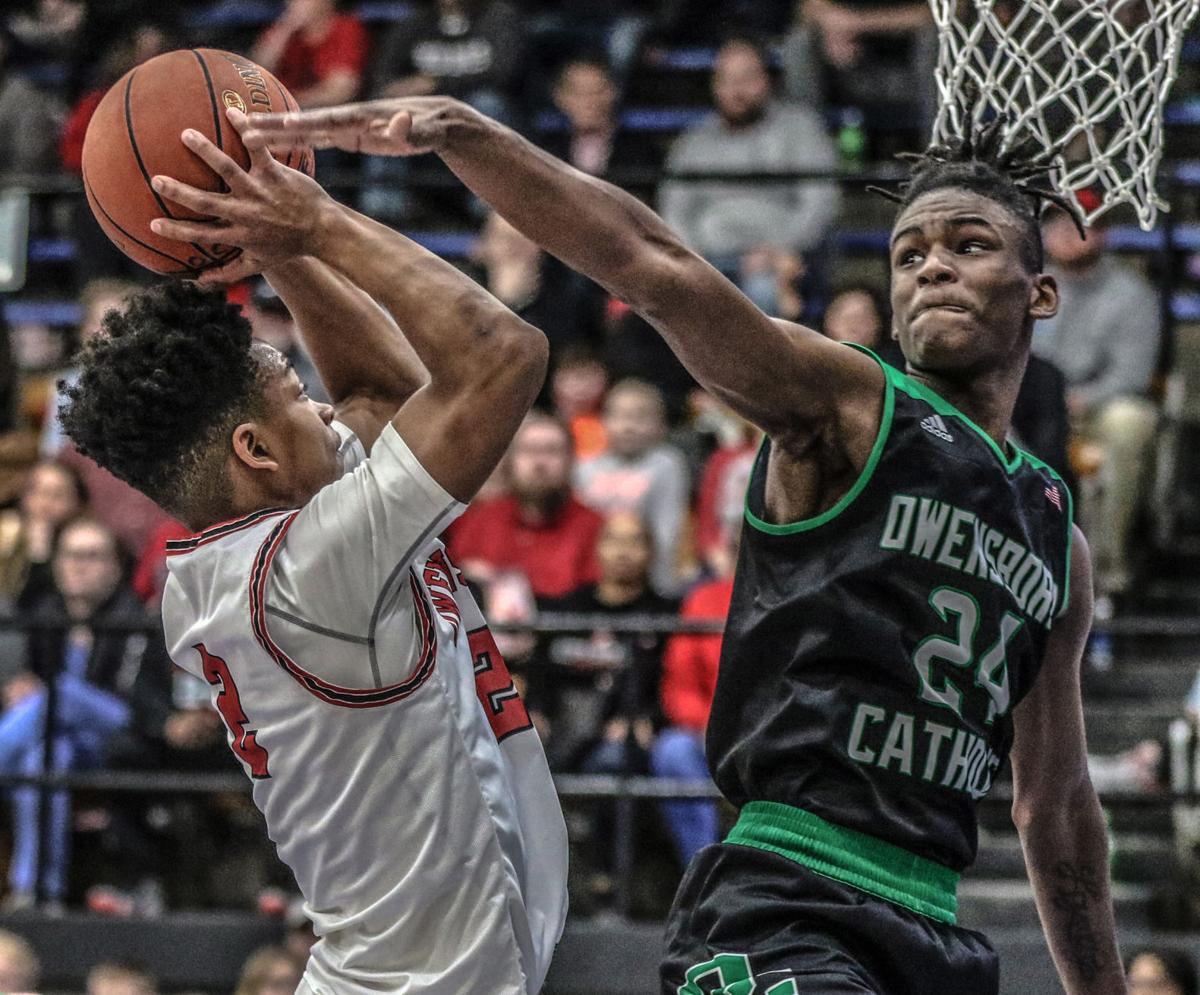 Owensboro Catholic’s Ji Webb defends the basket from Owensboro’s Amari Robinson-Wales during the 9th District Tournament Championship game on Feb. 28, 2020, at the Sportscenter. 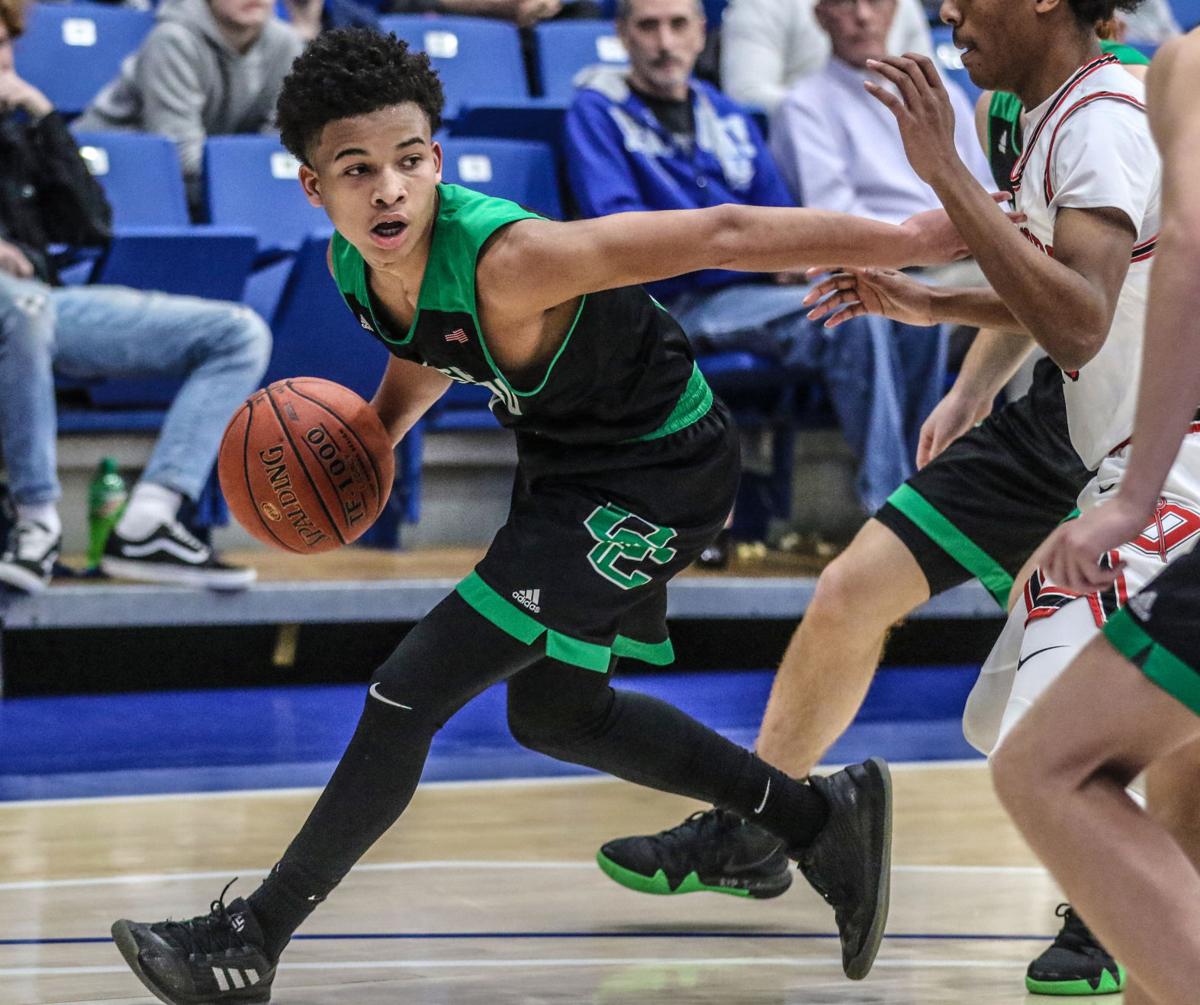 Owensboro Catholic’s Brian Griffith looks to make a play during the 9th District Tournament Championship game on Feb. 28, 2020, at the Sportscenter.

Owensboro Catholic’s Ji Webb defends the basket from Owensboro’s Amari Robinson-Wales during the 9th District Tournament Championship game on Feb. 28, 2020, at the Sportscenter.

Owensboro Catholic’s Brian Griffith looks to make a play during the 9th District Tournament Championship game on Feb. 28, 2020, at the Sportscenter.

Instead, the red-hot Aces have parlayed last season’s success into a momentum-building start for the 2021 season.

Right out of the gate, Catholic stands 4-0 following Monday night’s 58-38 conquest of previously unbeaten McLean County in the championship game of the All ‘A’ 3rd Region Tournament at the Sportscenter.

“We’ve got three guys who are scoring for us on a consistent basis,” OCHS head coach Tim Riley said, in reference to 5-foot-10 junior guard Brian Griffith (19.2 ppg), and 6-4 senior swingman Gray Weaver (17 ppg), and 6-6 junior forward Ji Webb (15.2 ppg). “When you can get three guys scoring like that on the high school level, you can be tough to beat.

“We also have four very good high school rebounders in Luke Scales, Ji Webb, Gray Weaver, and Sam McFarland — they get after it pretty good on the glass.

“Now, for us to be the team we want to become we also have to defend well, and there is certainly room for a lot of improvement in that area.”

In addition to beating McLean County, the Aces have posted impressive victories over Evangel Christian (82-41), University Heights (80-67), and Madisonville-North Hopkins (60-56).

Riley has been pleased with his team’s fast start but not necessarily surprised.

“We returned 70% of our scoring and rebounding back from last season’s team that won 20 games and won the regional championship,” Riley said, “so I knew coming in we had a chance to be pretty good.

Griffith, Webb, and Weaver are established stars in the region, Scales and McFarland have been good fits into the starting lineup, and the play of 5-10 sophomore guard Parker Gray — who averages 9 points per game in a reserve role — has been impressive.

Catholic is shooting 51% from the floor, including 38% from 3-point range, and is making 73% of its free throws. The Aces are led on the boards by Weaver and Webb, both averaging 6.2 rebounds per game.

“I like our team,” Riley said. “Brian Griffith is a big factor with his speed, and he’s a guy who can just go get buckets, go make plays. Ji Webb is a tremendous force inside in so many different ways, and Gray Weaver has transformed his body completely and is playing with a lot of confidence for us.

“Luke and Sam are just battlers for us, and Parker Gray has provided a lot of scoring punch off the bench.

“What it all adds up to is a lot of balance, and that’s what makes this a team that is tough to defend — and, as a coach, this the way you want it.”

Ep. 175: A busy offseason week for the Huskers and a COVID-19 pause in hoops