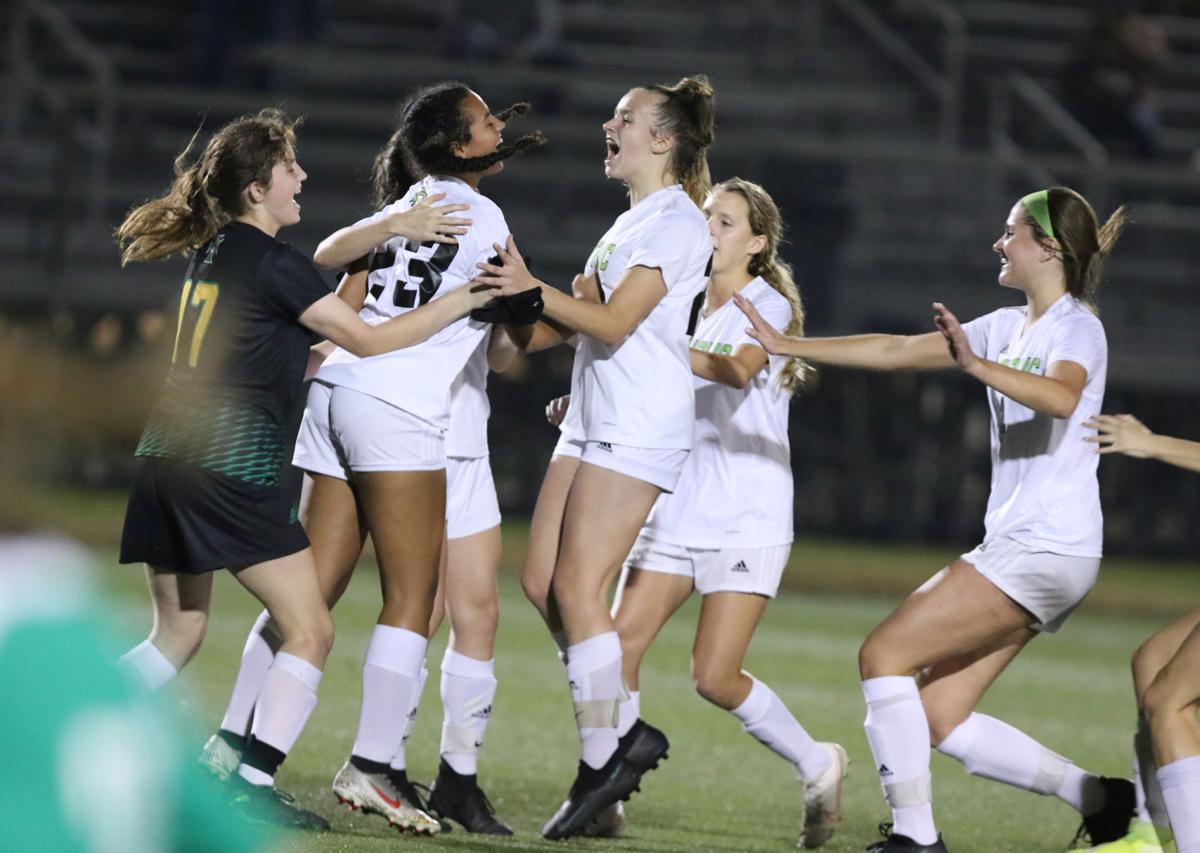 Owensboro Catholic’s Jahaira Ward is swarmed by her teammates after making the last kick to win the game against Meade County in the 3rd Region Soccer Tournament semifinals on Wednesday night at Shifley Park. 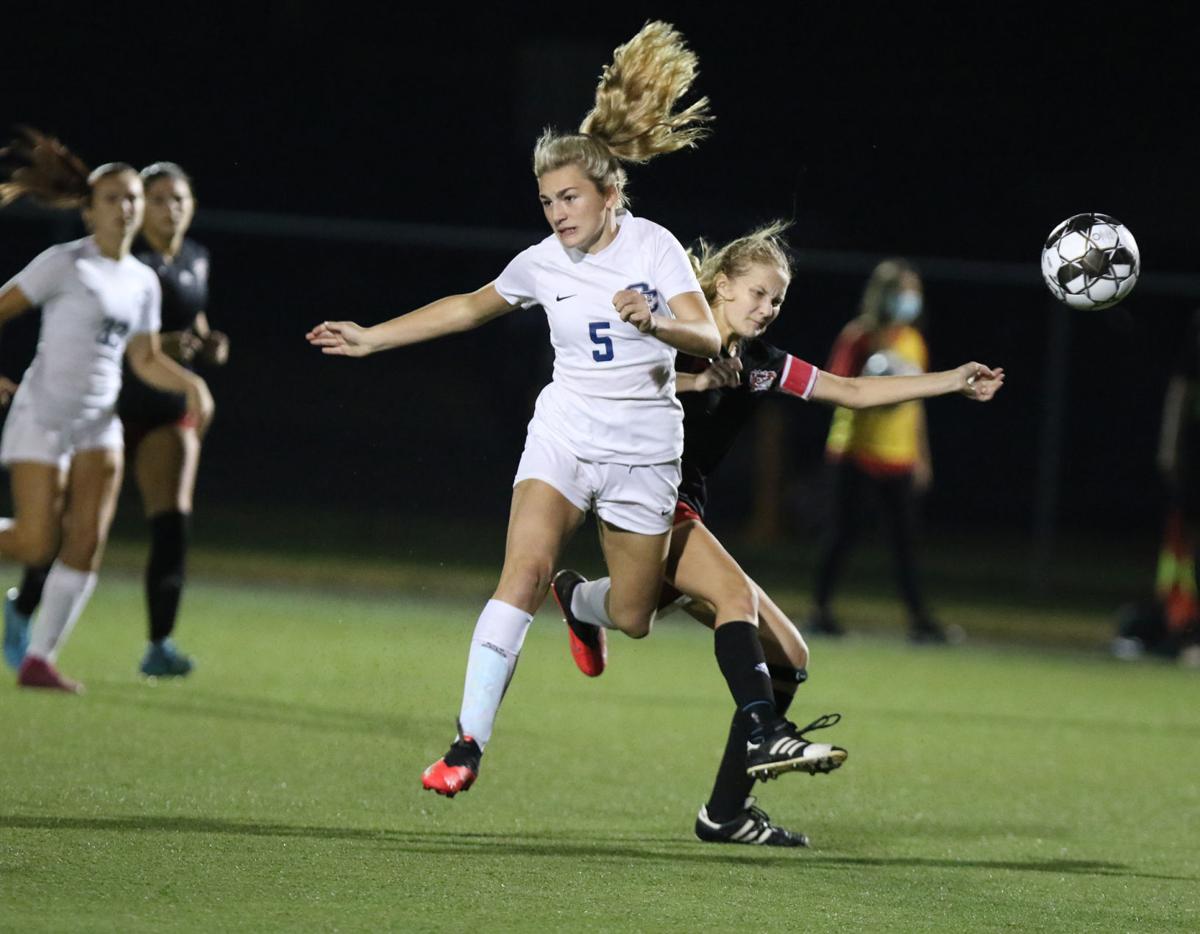 Ohio County’s Emily Goff collides with Daviess County’s Mackenzie Sweatt going for the ball during their game in the 3rd Region Soccer Tournament semifinals on Wednesday night at Shifley Park.

Owensboro Catholic’s Jahaira Ward is swarmed by her teammates after making the last kick to win the game against Meade County in the 3rd Region Soccer Tournament semifinals on Wednesday night at Shifley Park.

Ohio County’s Emily Goff collides with Daviess County’s Mackenzie Sweatt going for the ball during their game in the 3rd Region Soccer Tournament semifinals on Wednesday night at Shifley Park.

Jahaira Ward scored the clinching shot and backup goalkeeper Abby Payne made the key stop as the Lady Aces edged Meade County 2-1 in a sudden-death penalty-kicks semifinal thriller at the OHS Soccer Complex at Shifley Park.

Catholic will meet longtime rival Daviess County at 5:30 p.m. on Thursday for the championship.

All five players from both teams made their kicks in the first set of PKs. Payne then stopped a shot by the Lady Waves’ Lauren Littrell, setting up Ward’s big and unexpected moment to end it.

“I didn’t expect to step on the field, as I’ve been out for three weeks with a strained MCL,” Ward said. “I was very nervous, but at the same time I was confident I could do it — I’ve done it before.

“It made me really happy to help us get to the finals.”

Meade County broke on top 1-0 in the 20th minute when sophomore midfielder Maddie Clanton scored in transition off an assist from junior forward Cyia Robertson.

Even though Catholic dominated possession the remainder of the half, the contest remained tied through intermission.

The Lady Aces (8-7) again dominated possesssion throughout the second half — outshooting Meade 6-1 over the final 40 minutes of regulation — but could not find the back of the net.

“We weren’t very good tonight,” Catholic High coach Andy Hines said, “Meade played their hearts out and you could tell how much they wanted to win, so they deserve a lot of credit.

Play like a girl: Fuller makes history in Columbia

“Hopefully, the hype of being in the finals will inspire us in our next one. We need to show up and play hard.”

The Lady Aces finished with 13 shots on goal, compared to just three for Meade County, which ended its season at 7-8-1.

Steeley Walker scored a 20-yard straightaway goal in the 76th minute and Avery McNeiley added a rebound goal in the 80th minute as the Lady Panhers upset the Lady Eagles.

“This was a great team effort — our girls played their hearts out,” DCHS coach David Sandifer said. “Our defense didn’t come off the field, Emma Patterson was great in goal, and Danielle Carpenter did a great job marking Carly Embry.

Ohio County dominated possession in the first half, but Daviess County battled its way to a 1-1 deadlock by intermission.

The Lady Eagles (8-3-1) opened the scoring in the 24th minute when Embry connected on a 30-yard laser from the extreme right wing.

The defending champion Lady Panthers (8-5-2) battled back to tie it in the 34th minute when McNeiley broke free down the left side and drilled a 15-yarder.

Ohio County outshot DC 10-2 in the first half, but Lady Panthers goalkeeper Patterson was exceptional, particularly in the final two minutes when the Lady Eagles attempted multiple shots on goal.

Two-Minute Drill: Reacting to comments from Frost and Husker players

Watch now: Taylor-Britt says 'it shouldn't be that hard' to catch a punt

Watch now: Honas says, 'What you put on tape is who you are'

One Biden pick may have a harder time being confirmed. Here's why

How vaccines get made and approved in the US