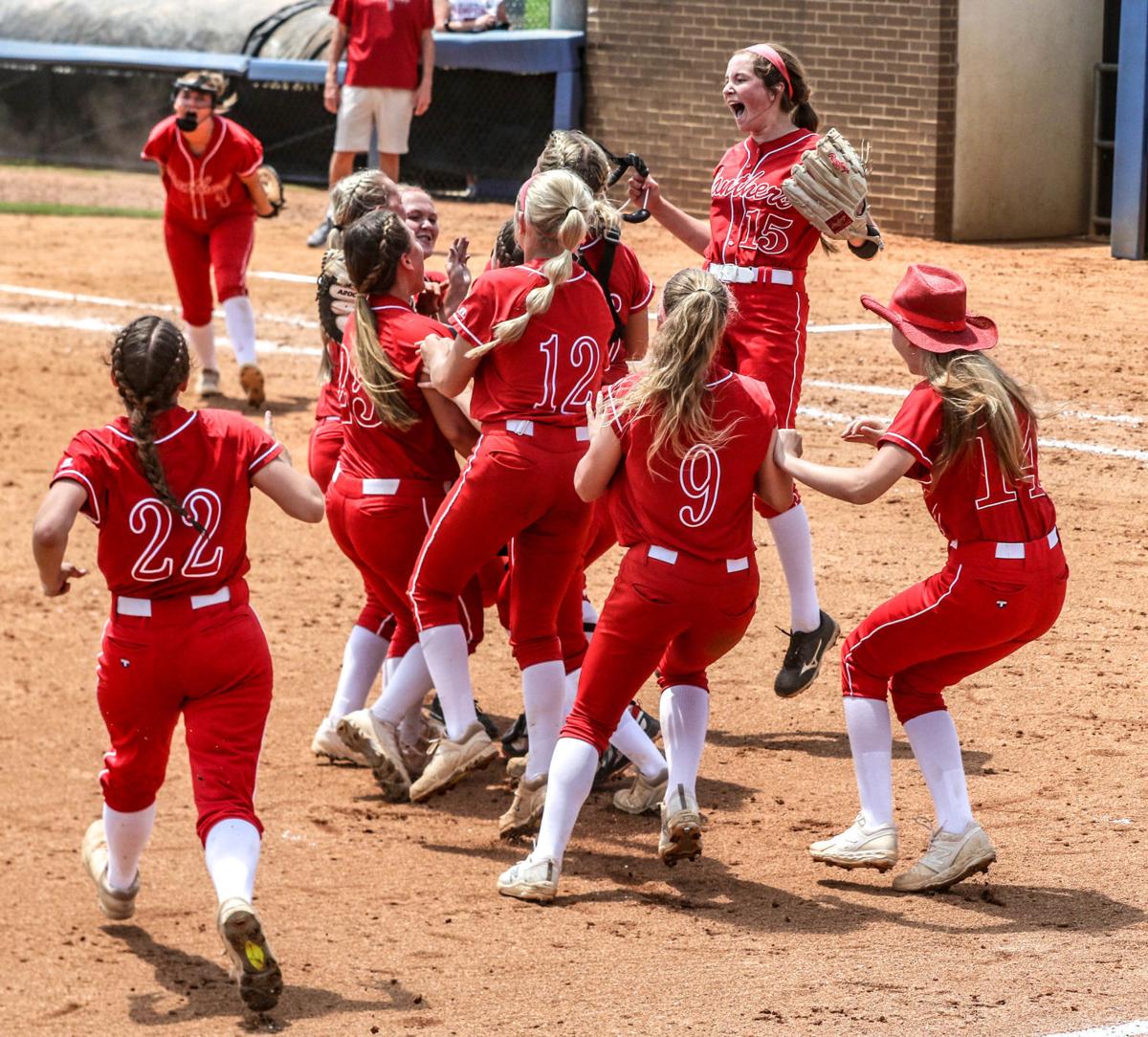 The Daviess County High School softball team celebrates on the field Saturday after defeating Louisville Ballard in the opening round of the KHSAA State Tournament at John Cropp Stadium in Lexington. 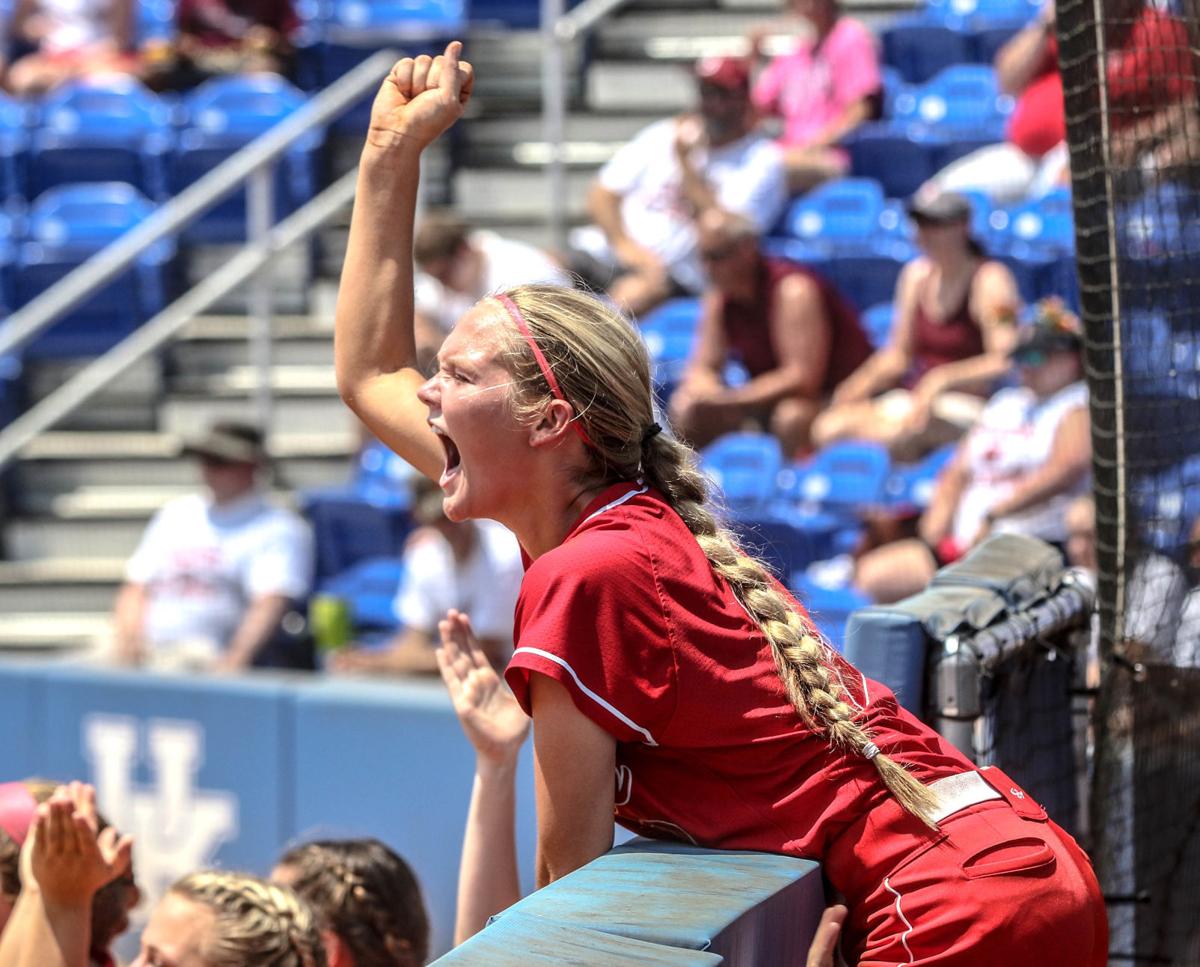 Daviess County’s Emma Stephens cheers on her team in the 7th inning Saturday against Louisville Ballard in the opening round of the KHSAA State Tournament at John Cropp Stadium in Lexington. 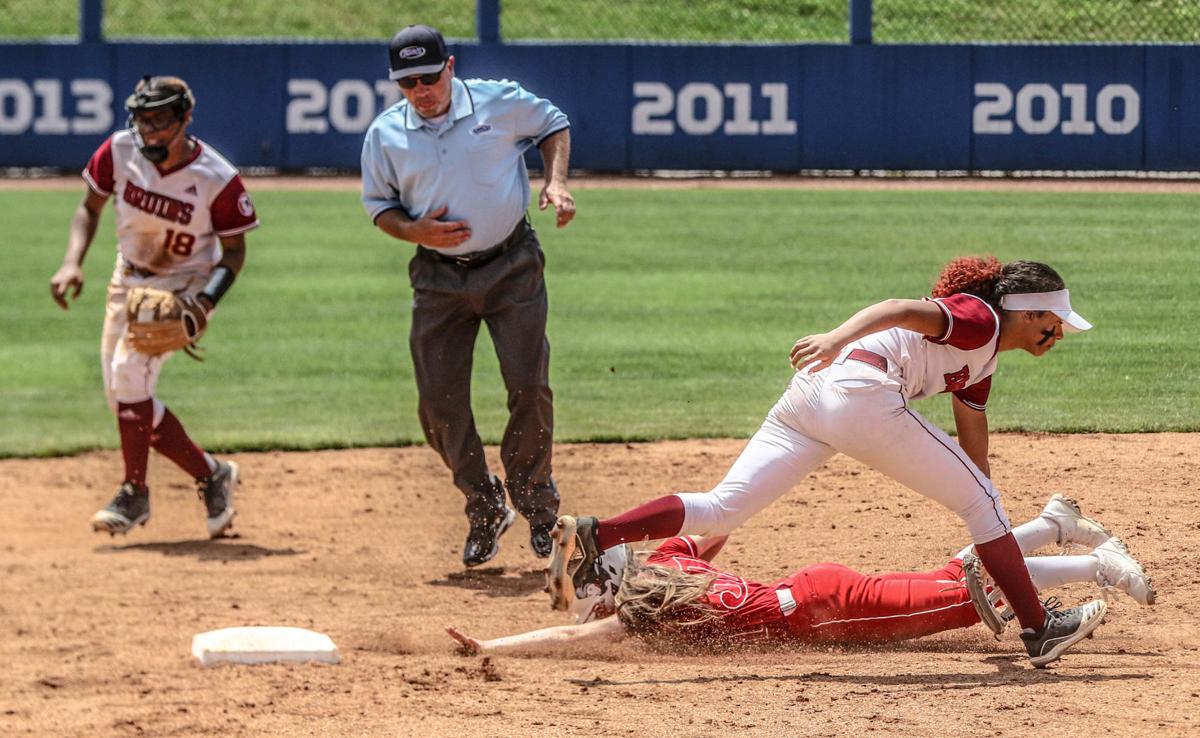 Daviess County’s Kayley Payne slides safely into second after a steal as Louisville Ballard’s Mikayla Milby attempts to make the play on Saturday during the opening round of the KHSAA State Tournament at John Cropp Stadium in Lexington.

The Daviess County High School softball team celebrates on the field Saturday after defeating Louisville Ballard in the opening round of the KHSAA State Tournament at John Cropp Stadium in Lexington.

Daviess County’s Emma Stephens cheers on her team in the 7th inning Saturday against Louisville Ballard in the opening round of the KHSAA State Tournament at John Cropp Stadium in Lexington.

Daviess County’s Kayley Payne slides safely into second after a steal as Louisville Ballard’s Mikayla Milby attempts to make the play on Saturday during the opening round of the KHSAA State Tournament at John Cropp Stadium in Lexington.

LEXINGTON — Katie Mewes and the bottom of the order for Daviess County’s softball team had been producing at the plate much of the season.

There was never a more important time for that than the top of the seventh inning of the KHSAA Softball SemiState game against Ballard.

Down a run, Mewes led off the seventh with a double, and scored the tying run before Abby Newman’s sacrifice fly to center scored Sophie Simone with what would be the winning run Saturday in a 2-1 victory over Ballard.

“It still could’ve been our game, because we were only down by 1, and I really didn’t want to strike out again because I’d struggled my past two at-bats,” Mewes said of going against Ballard pitcher Brooke Gray. “She was living on the outside, I think she missed really outside and I just barreled up on it.”

Simone had singled and reached third on a throwing error to the plate when Ballard was trying to get Mewes.

“The bottom part of the lineup turned it over for us and found a way,” DC coach John Biggs said. “Katie Mewes has been doing that all year, she keeps it pretty simple, she says see ball, hit ball. When Katie got to second base, I knew if we got a base hit she had a shot to score.

“Sophie came up, dumped that one in, found a way. That’s kind of the way it’s been all season, that bottom part has been having quality at-bats.”

The bottom of the order keeping the half inning alive for leadoff hitter Abby Newman to come back up was also big.

Newman, a senior, was about the only Panther to have much success against Gray, who struck out 12 DC batters.

“I knew our winning run was on third, so I was just thinking base hit,” Newman said. “As long as I can hit the grass we could score, just keep fighting, hit a long fly ball or something to the grass.”

The long fly ball to center field did the trick for the Lady Panthers at John Cropp Stadium at the University of Kentucky.

They now await the winner of the postponed SemiState game between Pendleton County-Boone County. The Lady Panthers will play that winner on Friday back at John Cropp at UK in the State Tournament quarterfinals.

Newman had tried to wait for her pitch during at-bats.

“I really worked on finding my pitch, try not to chase the rise ball, just waiting for my pitch,” Newman said. “I took a lot of balls, I barely swung the bat, but when I did I made sure it was my pitch.”

Mewes was 1-for-3 and and Newman 1-for-2 when Gray allowed four hits in the game.

Roby had pitched a good game herself, striking out four but also allowing just four hits. Ballard went up 1-0 in the bottom of the second when Taylor Sanders doubled down the right field line and scored on a throwing error. DC didn’t have many chances to string hits together, leaving two on in the fourth and sixth innings.

That made it vital for Mewes to get the game tied when Simone had her slap single to shallow leftfield.

“Whenever Sophie hit it, she slapped, once I saw it was a dink hit, I just took off, I had to score,” Mewes said.

Trying to figure out Gray just took some time.

“There was a lot of talking going on about what was going on at the plate, that’s what I love, we were trying to make adjustments so we could put the ball in play,” Biggs said. “Toward the end she kind of lost her control a little bit, wasn’t throwing close enough for us to chase, we were able to get ahead in the count.

“Abby, I felt good if we could get back to her (in seventh). It seemed like she was coming up with two outs a lot. She got down 0-2 on that last hit, that’s just Abby, she’s been doing that her whole career.”

Photos: No. 12 Notre Dame trounces No. 18 Wisconsin in Soldier Field