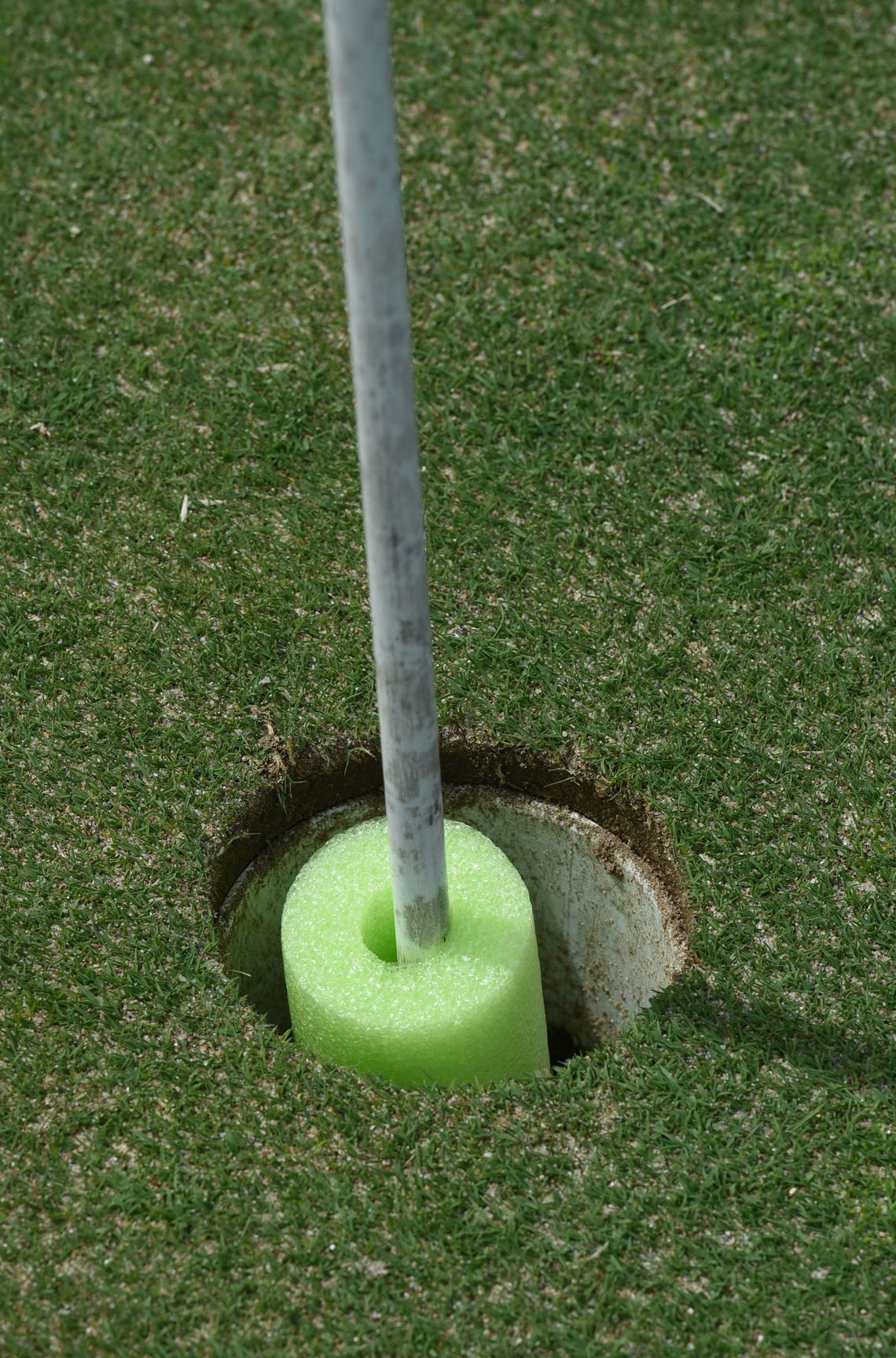 Cut foam swimming noodles fill the cup on the 9th hole so golfers don’t touch the flag during the COVID-19 outbreak. 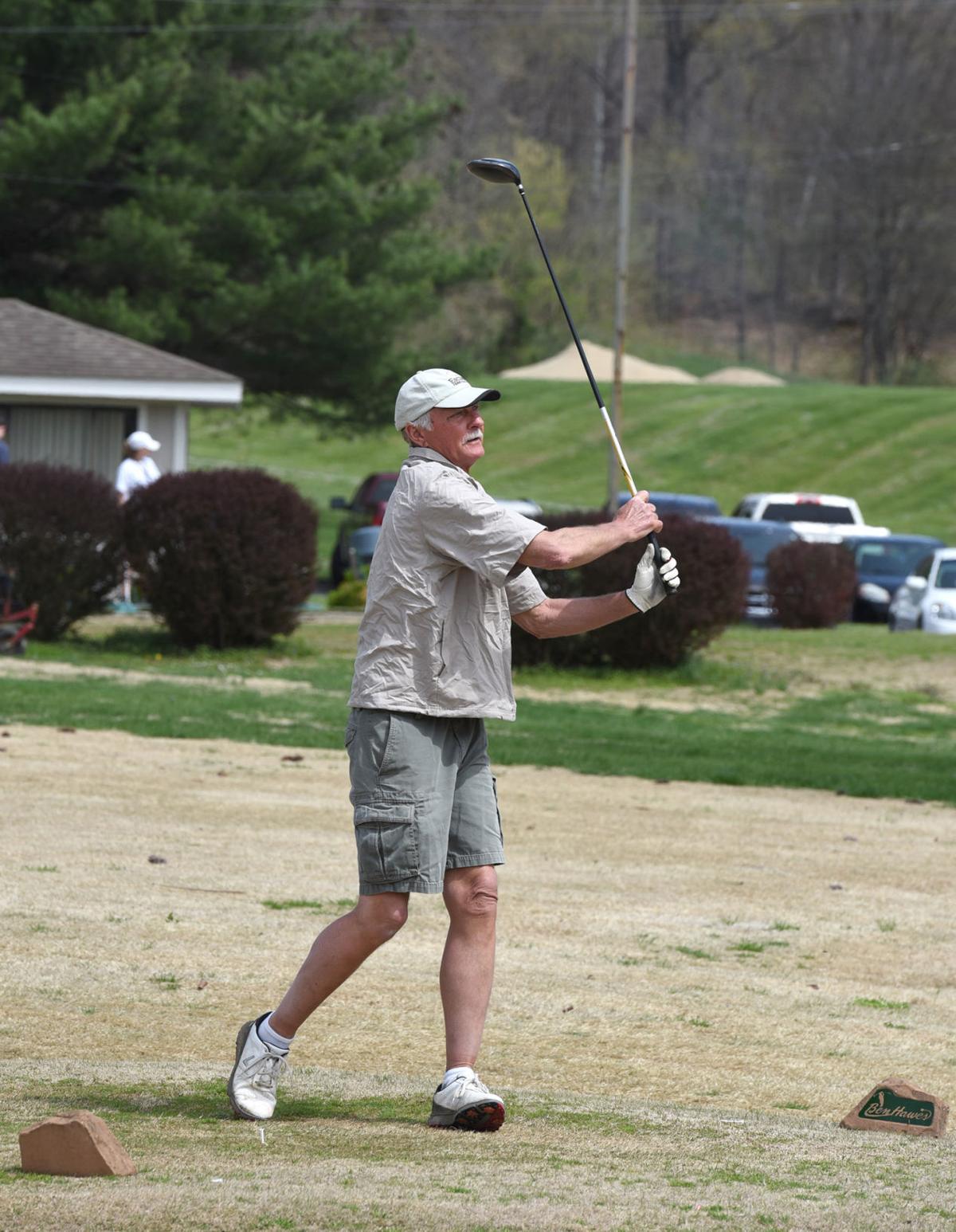 Rick Kenczka hits his drive on the 1st hole on Monday at Ben Hawes Golf Course. Kenczka says he has never played as many rounds of golf as he has this winter and spring.

Cut foam swimming noodles fill the cup on the 9th hole so golfers don’t touch the flag during the COVID-19 outbreak.

Rick Kenczka hits his drive on the 1st hole on Monday at Ben Hawes Golf Course. Kenczka says he has never played as many rounds of golf as he has this winter and spring.

Golf courses in Owensboro-Daviess County are open and rounds are being played.

Playing an outdoor sport where a form of social distancing has always been practiced, golfers are still making their way around courses, which are taking all government-mandated precautions seriously in the wake of the COVID-19 pandemic.

Ben Hawes Golf Course, The Pearl Club, Owensboro Country Club, Panther Creek Golf Club, Windridge Country Club and Hillcrest are open and have golfers playing. The courses are also following the guidelines that have been set by both the CDC and the Kentucky state government.

“Panther Creek is open and we’re taking the same measures as other local courses,” said Kevin Ferguson, owner of Panther Creek. “We’ll ask our customers to follow all social-distancing protocols recommended by the CDC. Most folks have been very patient and understanding of the new normal.”

Part of that new normal has been incorporating swimming equipment being placed in cups on the courses.

Pieces of swim noodles (think of floaties for kids) have been put in cups, raising the depth of the cup by 2.5 inches, so golfers don’t have to touch the cup to retrieve their golf balls.

“Pretty fancy stuff,” said Kevin Glover, course superintendent at OCC. “(The noodle idea) floated around the Internet a little bit and then we hopped on it pretty fast.

“This was something we liked right out of the gate. The ball doesn’t go to the bottom and you don’t have to touch anything to get it out.”

Charles Whelan, golf course manager for the City of Owensboro, said the pool noodle idea is a good one for several reasons. Greens can keep being mowed for one thing. There was green aeration going on at Hillcrest on Monday.

At the Pearl Club cups on the greens have been lifted out two inches, and the ball can hit that elevated cup and be counted.

“That way they can bounce it off, pick up the ball and go,” said Terry Delk, Pearl Club owner. “There’s no contact with the cup or the flag. We’ve got 200 acres out here, so that’s great for social distancing.”

David Baker is a local businessman and avid golfer. He and some friends were out playing at the Pearl Club last week.

“It’s fun, nobody is touching the flags,” Baker said. “The cups are two inches out of the ground. It doesn’t matter how hard you hit it, all you have to do is hit the cup and it’s in.

Ben Hawes also has limited tee times to avoid overcrowding. All courses are limiting carts to one per player, with carts being disinfected top to bottom when they come in from the course and then go back out.

Social distancing is the message for golfers, Whelan said.

“One of the rules we’ve put in place is not to remove the flag or touch the flag at all,” said Jason Fitch, golf pro at Owensboro Country Club.

Contact points on the courses have been removed. Those include bunker rakes, golf ball washers, water coolers have all been removed.

“Basically anything they can touch is gone,” Glover said.

All of the golf people were glad to be able to get out for some sports activity.

“There’s not much else you can do right now,” Fitch said. “It’s nice to have this available.”

“We’re taking individual carts,” Baker said. “We’re taking it one day at a time. We’re doing what we can, but we’re wanting to get out.”