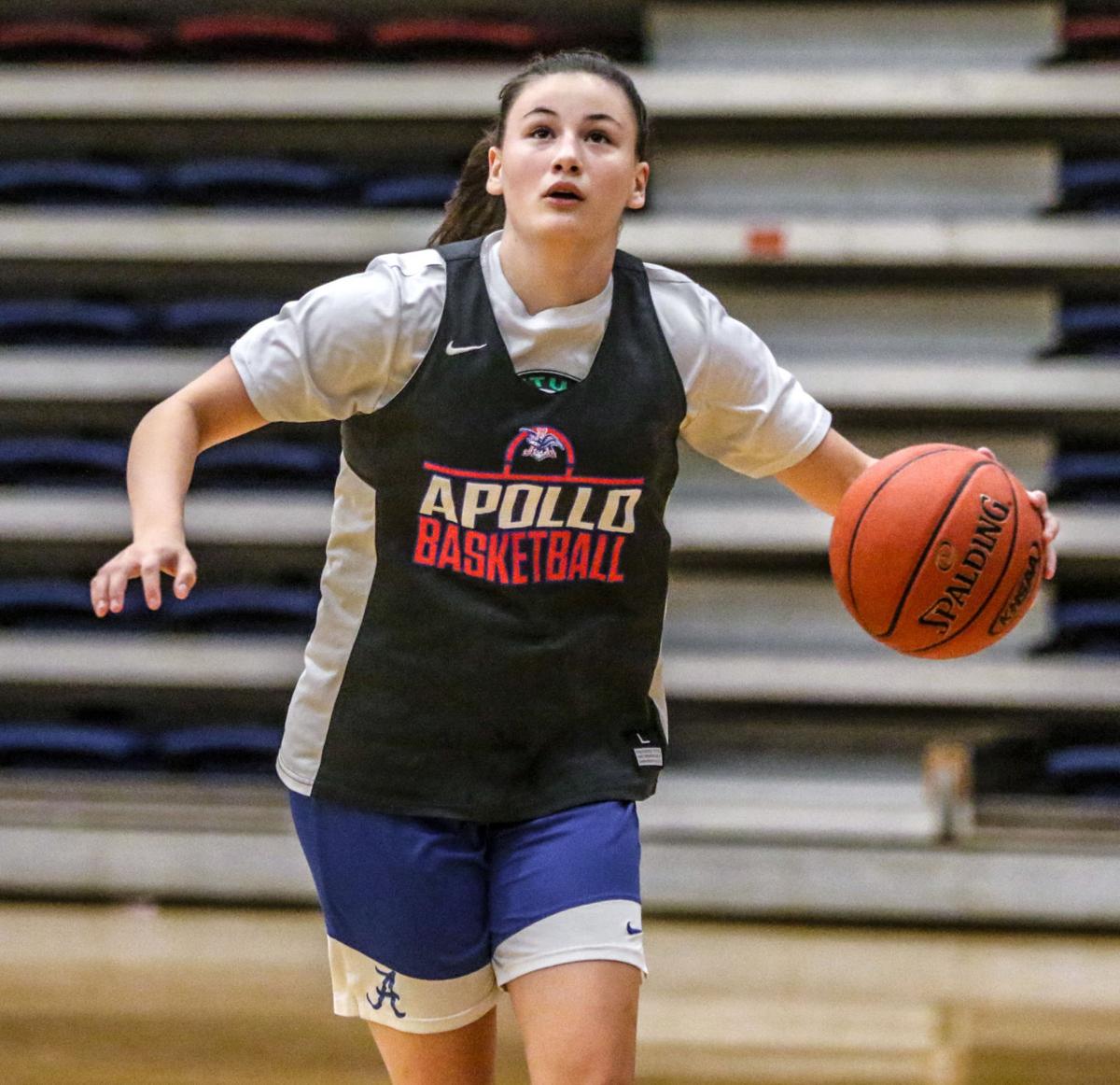 Apollo’s Shelbie Beatty runs through drills during a practice at the school on Tuesday. 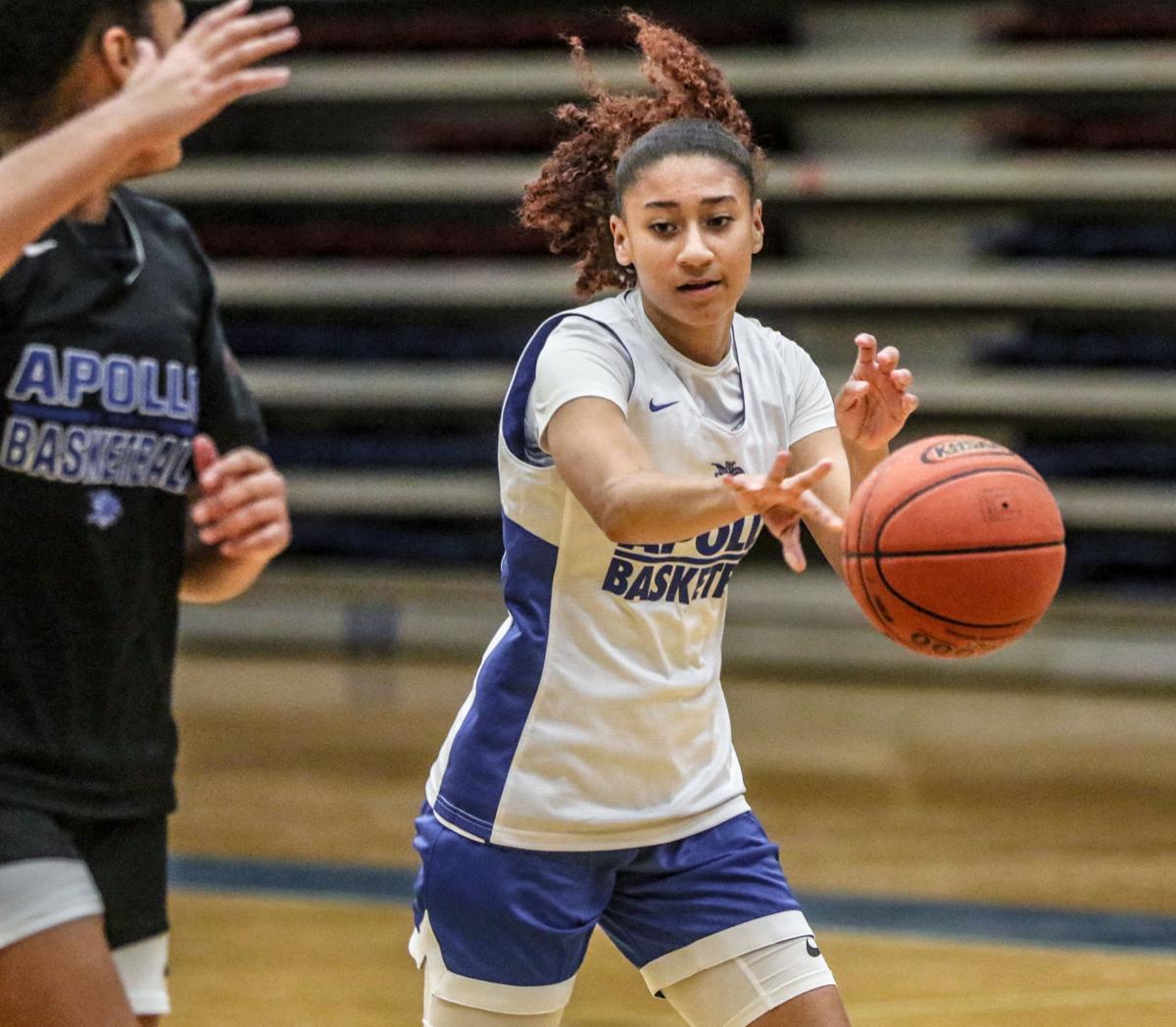 Apollo’s Amaya Curry gets down court during an afternoon practice on Tuesday at AHS.

Apollo’s Shelbie Beatty runs through drills during a practice at the school on Tuesday.

Apollo’s Amaya Curry gets down court during an afternoon practice on Tuesday at AHS.

High schools could start basketball practice last Friday, and most if not all got going this week.

The start of the regular season is about five weeks away.

Owensboro Catholic’s boys will begin their season on Nov. 30.

Apollo’s girls won last year’s 3rd Region Tournament championship for the first time since 1997. Natalie Payne was an All-State player on that Apollo team, which was coached by Willis McClure.

Payne was back running practice early this week, and McClure stopped in. He won’t be in as much of a full-time co-coach role as he was before, but he will still be around Eagle Arena.

“He’s got an open invitation, if he wants to show up, he can show up,” Payne said.

Apollo in early practices is looking to build a hard-nosed approach to this season.

“I think our main focus to start the season is having that gritty and toughness kind of mentality,” Payne said. “I feel like we’re young, the experience is not there, so we have to buckle down on doing things the right way, not cutting corners, we’ve got a lot of teaching and learning to do. November 20 is our first scrimmage.”

Apollo, 16-7 last season, has a good foundation with guards Shelbie Beatty and Amaya Curry in the backcourt.

“We consider them one of the best backcourt duos in the 3rd Region,” Payne said. “They’ve got the regional championship. They’ve got some confidence, a little swagger I think. They have to be the ones we count on and help lead our young kids.”

Payne likes what the younger players have brought to the early practices.

“I feel like they’re very eager to learn, they take coaching well,” Payne said. “They are passionate about learning more about the game. We’ve had two really good practices, (Monday) was about toughness, we were getting after it.”

Catholic was the 3rd Region boys’ runner-up behind champion Muhlenberg County last season. The Aces were 18-10.

The Aces don’t have a lot of bodies in practice right now because of some missing because of football and some out recovering from injuries.

“We’ve got a few kids who are new, and we’re trying to get them acclimated,” Catholic coach Tim Riley said. “But the guts of our team are not with us, except for Parker Gray right now.”

Braden Mundy is a notable football name that will be with basketball later.

This is a good time of the preseason for reserve players to get some added attention and instruction.

“We’re going to try to help kids out there get better, have some young kids with talent,” Riley said. “I always tell them, young kids will get more attention than they get the whole year. We’ve got a bunch of guys in football, and now the younger ones are going to get the most attention.”

Watch now: 5 standout performances in the Packers' victory over the Rams

Magic Mike is back! But what are Channing Tatum's other great roles?

Students' quick act once shooting started may have saved their lives