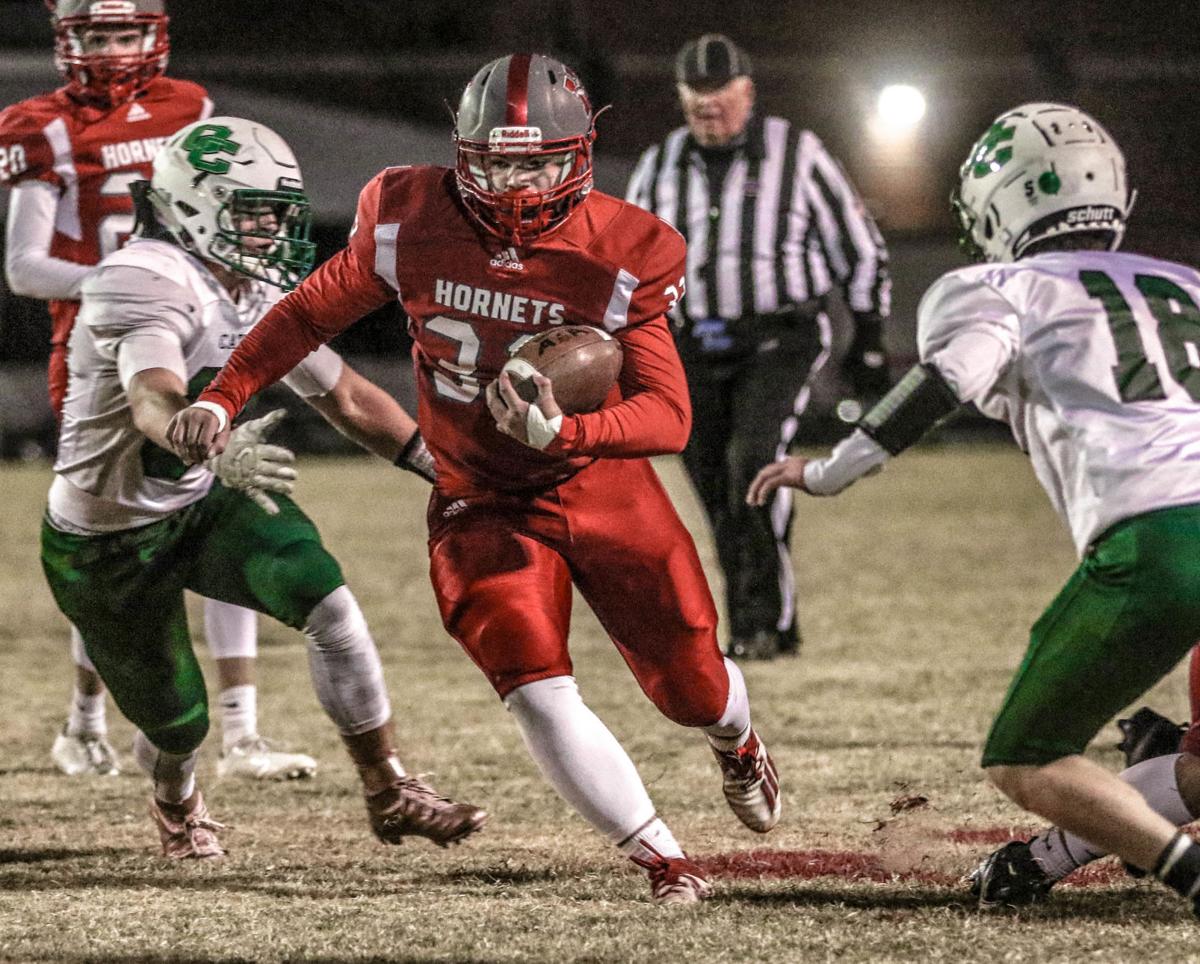 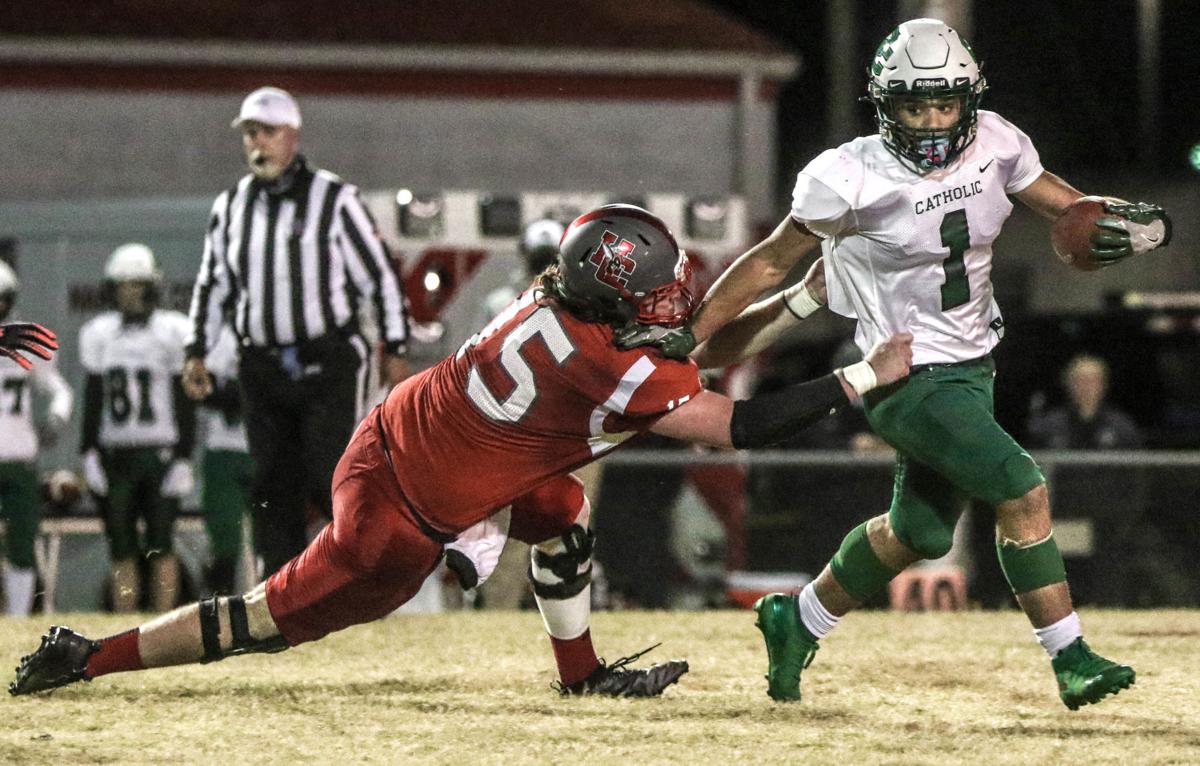 Owensboro Catholic’s Braden Mundy gets away from Hancock County’s Kaleb Keown for a gain in the first quarter Friday at Hancock County High School.

Owensboro Catholic’s Braden Mundy gets away from Hancock County’s Kaleb Keown for a gain in the first quarter Friday at Hancock County High School.

HAWESVILLE — The Hancock County High School football team was simply not going to be denied on Friday night.

The upstart Hornets trotted onto Schafer-Glover Field undefeated and they departed it precisely the same way after beating longtime Class 2-A district rival Owensboro Catholic 30-29 in a thrill-packed barnburner from start to finish.

“This is one of those games that you have to win to take the next step, to move your program forward,” said an ecstatic Hancock County head coach Bobby Eubanks, whose team improved to 5-0 overall and 3-0 in District 2. “This is the first step for us and we have to continue to get better week to week to get where we want to be.

“This group loves the game, loves playing football, and I just couldn’t be happier for them — this is big for us, no doubt.”

The fourth quarter was filled with twists and turns.

Finley Munsey scored from three yards out at 10:54 to provide Catholic its first lead of the contest, 23-22.

Undeterred, Hancock County marched 59 yards in 14 plays behind the running of Darian Clay and Logan Willis, whose 2-yard TD blast and a 2-point conversion run by Clay reclaimed the lead, 30-23, and momentum for the Hornets at the four-minute mark.

Catholic, however, was not done yet.

The Aces (4-2, 2-1) drove 60 yards in seven plays and pulled within a point on quarterback Lincoln Clancy’s 8-yard touchdown run at 1:02. The Aces went for 2 and the win, but Braden Mundy was stopped just shy of the goal line.

“We didn’t want to get in a back and forth battle with them in overtime on the road the way they were running the ball,” Aces head coach Jason Morris said. “We handed the ball to our best player and he came up just short of getting in there.”

Hancock County was able to get a first down and then run out the clock to seal its first victory over Catholic since winning on the same field, 24-19, on Oct. 9, 2009.

The Hornets opened the game sharp, driving 66 yards in 11 plays to take an early lead. Quarterback Cole Dixon, rolling to his right, connected with Kaleb Keown for an 11-yard TD pass on 4th-and-7. Clay followed with a conversion run to make it 8-0 at 5:40 of the first period.

Catholic’s defense stepped up early in the second quarter when Reid Clark intercepted a Dixon pass and raced 26 yards for a touchdown. Mundy’s conversion run tied the contest at 8.

Hancock County came right back to regain the lead on a 17-yard scoring run by Clay, followed by a Clay conversion run that made it 16-8 at the 8:16 mark.

With just under five minutes remaining in the half, Clancy tossed a 9-yard scoring pass to Mundy, who followed with a 2-point conversion that tied the game at 16.

Wisconsin cancels visit to NU due to virus

Midway through the third period, the Hornets’ ground attack pounded the Aces with a 10-play, 65-yard march capped by Clay’s 7-yard TD run — pushing Hancock County in front 22-16 and setting the stage for the wild fourth quarter.

“We lost to a very good football team that played their hearts out for four quarters — we got whipped,” Morris said of the Hornets. “We didn’t come ready to play and we’ve got to get that fixed. It’s killing us and we can’t get any early momentum.”

Hancock County finished with 304 yards of total offense. Clay led the way, carrying 16 times for 133 yards, including 91 in the second half. Willis was also rock-solid, gaining 93 yards on 23 carries.

“Clay and Willis did a great job and so did our line,” Eubanks said. “Also, I thought our defense was very solid — we made big plays when we needed to.”

Five players who could be the Arizona Wildcats' MVP this season

Who has the edge when the No. 9 Badgers travel to Nebraska?

Who has the edge when the No. 9 Badgers travel to Nebraska?

DiNucci gets advice from Dak before practice