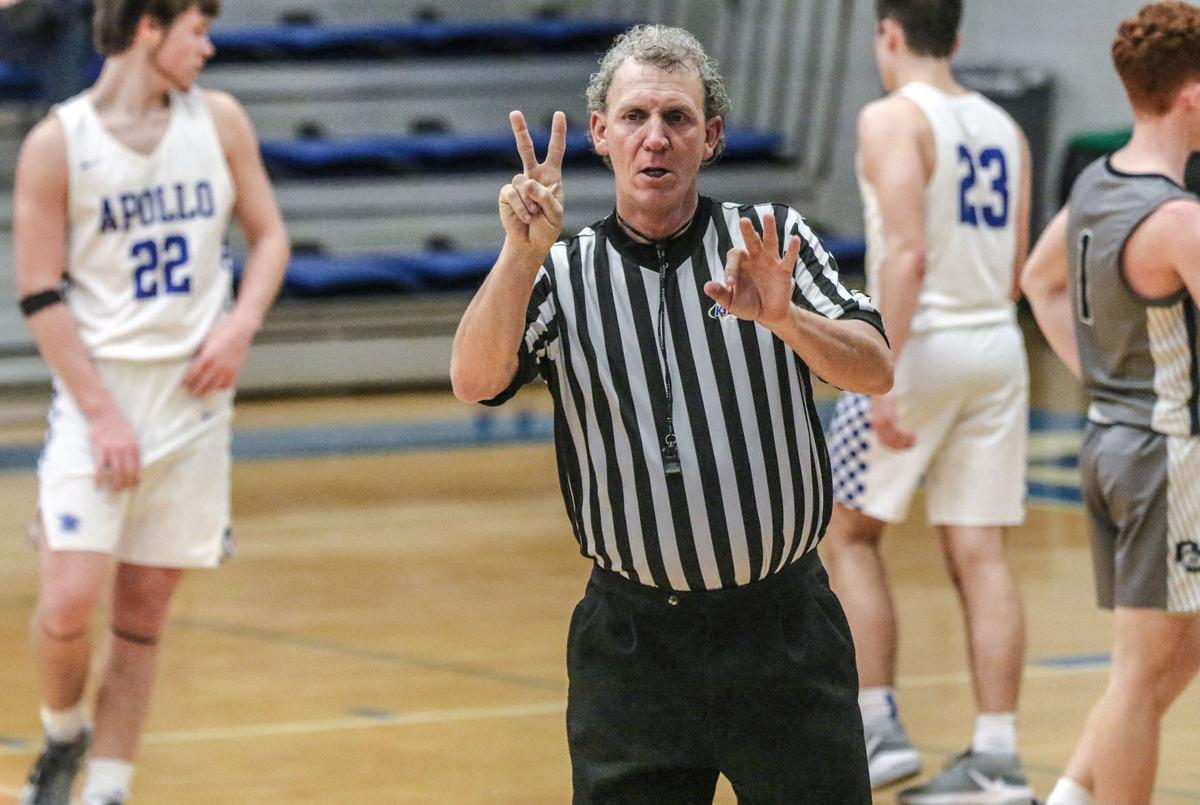 Darren Peveler signals to the sideline on Tuesday during a boys basketball game between Apollo and Ohio County. 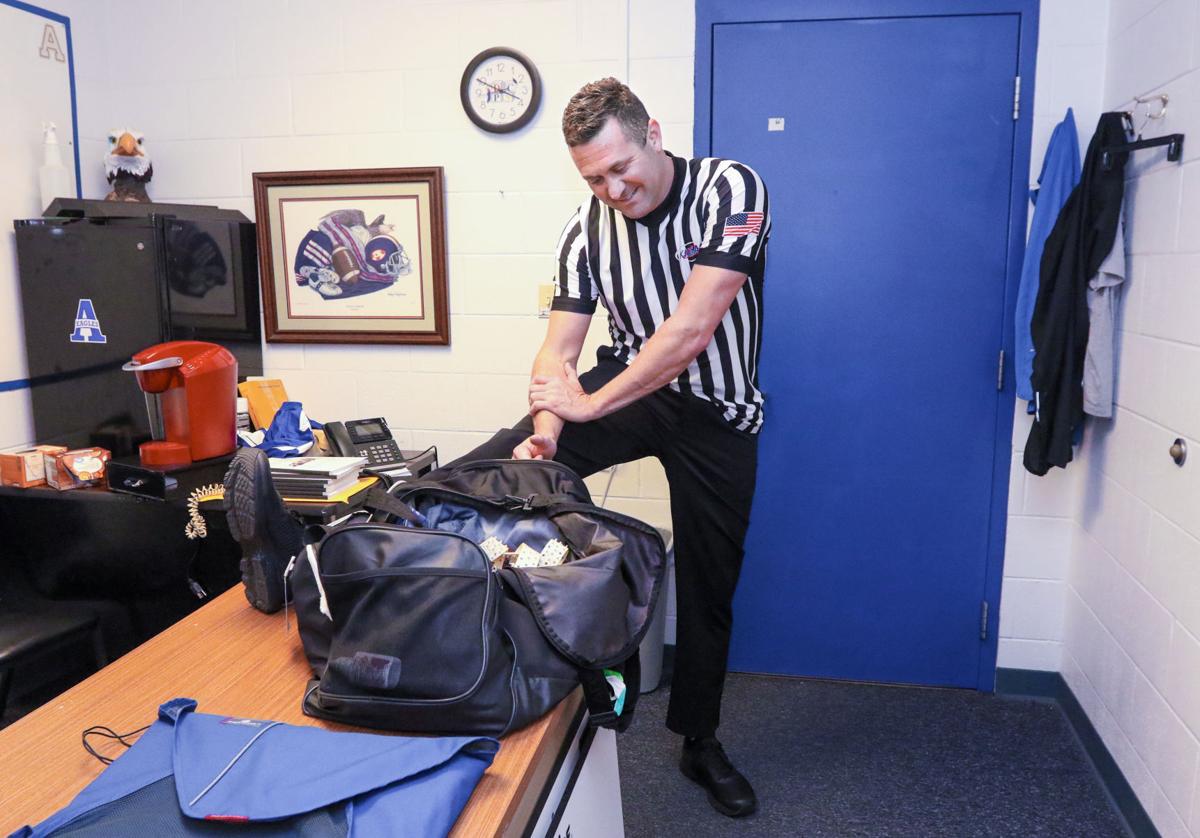 Official Jason Wilkins stretches before calling a game between Apollo and Ohio County on Tuesday in Owensboro. 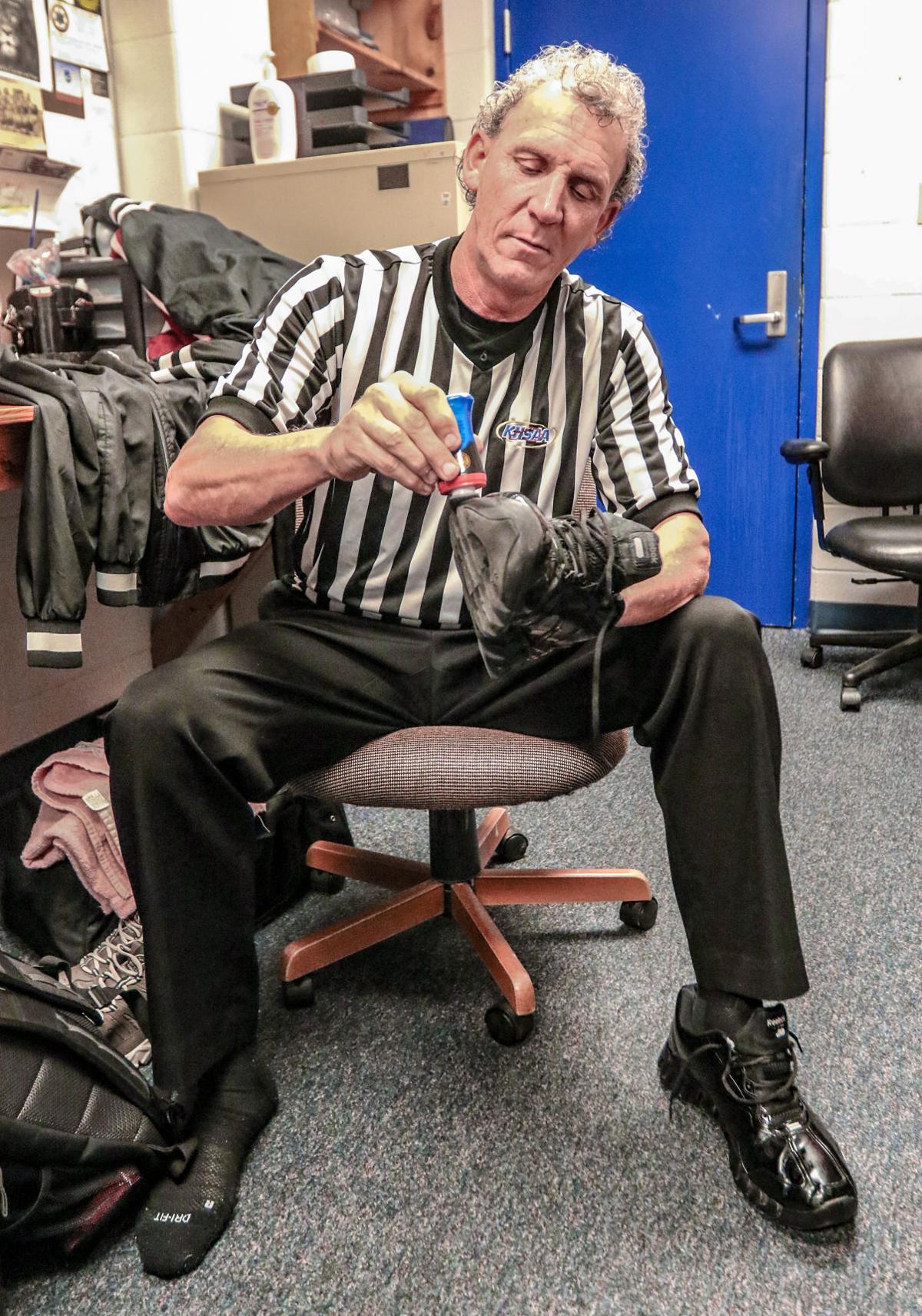 Darren Peveler puts fresh polish on his shoes before officiating a basketball game between Apollo and Ohio County on Tuesday in Owensboro.

Darren Peveler signals to the sideline on Tuesday during a boys basketball game between Apollo and Ohio County.

Official Jason Wilkins stretches before calling a game between Apollo and Ohio County on Tuesday in Owensboro.

Darren Peveler puts fresh polish on his shoes before officiating a basketball game between Apollo and Ohio County on Tuesday in Owensboro.

A large part of having high school basketball games in this COVID-19 winter has been getting referees to work those games.

Cancelations, postponements, teams being out of action for a couple of weeks at a time, all of it has caused havoc with trying to keep officials working games.

It has been across boys’ and girls’ varsity basketball, down to junior varsity, freshmen, and middle schools.

Owensboro High School’s boys, for example, entered into a second team shut down this season because of a positive COVID-19 case.

David Pentecost has been trying, and succeeding, in keeping things going along from the game official side of things as the KHSAA assigning secretary for the 3rd Region.

“The scheduling side of it, that’s been crazy. That’s an understatement,” Pentecost said Tuesday night at Apollo High School. “The communication I’m getting, and the people I’m working with on both sides, has been amazing.

“Last week was the first week we’ve had games get canceled two hours before game time. We had that happen four times last week.”

That meant a lot of cell phone work, text messaging and emails going between schools, Pentecost and the referees.

“You’ve got to be patient, that’s where I try to be positive about it,” Pentecost said. “The schools, they can’t control it, we can’t control it, it’s out of our control. We’ve got to stay upbeat. That’s one thing we tried to talk to the officials about. It’s a different year, unlike anything we’ve ever had. Be ready, expect the unexpected.”

Kids have been on buses going to a game when a call would come from the opponent saying they couldn’t play.

Pentecost had a call at 11 a.m. one day from a team that had to cancel because its opponent was quarantined, then the host team called back a couple of hours later saying it found a replacement opponent, and could it get some officials?

“We’ve had several of those. We had that today,” Pentecost said.

Jason Wilkins has been refereeing basketball for 21 years. He was working the Ohio County at Apollo boys’ varsity game Tuesday.

“For us, we have the same struggles as David or the schools, all of us are working,” Wilkins said of officials with day jobs, which is most of them. “The last-minute cancelations. We understand the problems. I’m a creature of habit, so for me it’s just getting in the schools, going through the protocol, getting your temperature taken, the masks.”

“David is pretty good about letting us know,” said Darren Peveler, who was working the varsity game with Wilkins. “I’ve had six or seven games canceled, but nothing spur of the moment. I might know early in the morning.”

Officials are asked to wear masks that are provided when they’re going to the court from their dressing rooms and during dead ball situations (timeouts). The option is there if they want to wear their mask to referee, but that can be difficult. A couple of officials who work college games have whistle openings in their masks.

Elder was working the JV Ohio County at Apollo game, but he will be doing a varsity game this season.

With some officials opting out in the 3rd Region, it opened up chance for other officials to work.

“We had eight officials opt out, and three were some of our most veteran officials,” Pentecost said. “We have 72 officials in the region. We’re making it work. You’ve got to take the approach, next man up. The opportunities are there. We’ve got some young officials that we’ve been able to put some of them with some of the veteran guys.”

Attendance has been very limited because of COVID-19 protocols at most high schools across Kentucky that are playing basketball. There are likely less 200 fans in a gym total.

Officials like having fans in the gym, even if they’re getting yelled at by those fans.

Wilkins would also rather work in front of a loud and boisterous gym.

“With no crowd, I wish they could play some background music,” Wilkins said. “The people who have not been as forgiving have been the fans. Most fans are good, but there are some you hear during this. We try to turn all that off.

“It’s very quiet now. I was at the Sportscenter this weekend, and I was asking them ‘Can we put on some background music on?’ You’re hearing conversations about where people are going to dinner.”

Coaches have been aware that their voices can carry as well.

“Coaches, haven’t had any issues, I think coaches have respected the situation, they’ve paid attention that there’s not fans,” Wilkins said.

The officials, fans, coaches, spectators that are there, all know the precautions are in place for games to be played and athletes to be safe.

“My daughter plays middle school,” Wilkins said. “They don’t allow fans, but she’s getting to play.”

WATCH NOW: The Explorers' Jared Walker on baseball and family