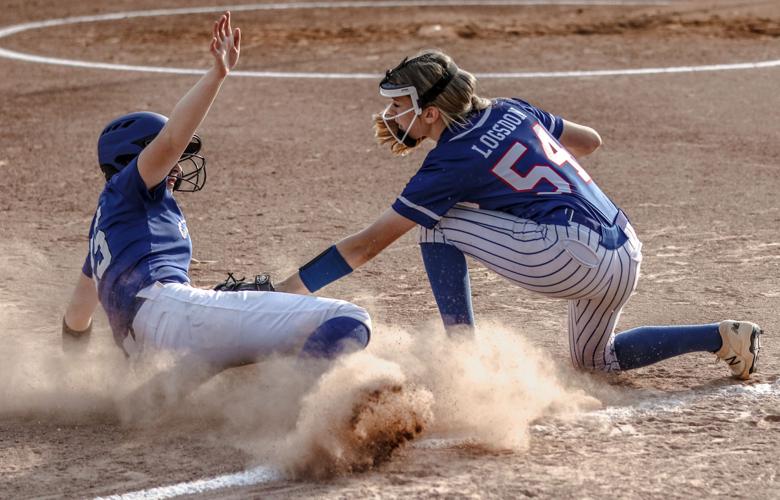 Whitesville Trinity’s Abigail Payne beats the tag from Apollo’s Lily Logsdon during the first inning on Thursday in Whitesville. 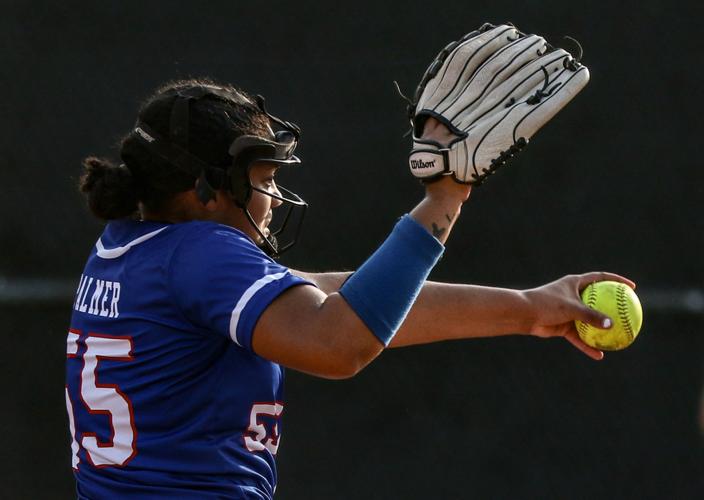 Apollo’s K’Asia Palmer pitches in the first inning against Whitesville Trinity during action on Thursday in Whitesville. 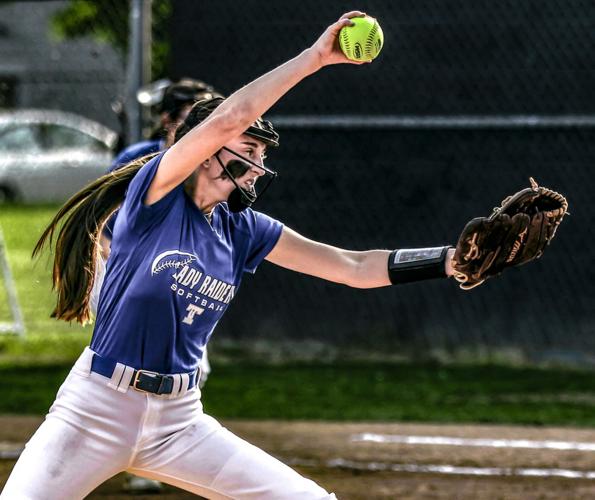 Whitesville Trinity’s Allie Barnett pitches in the first inning against Apollo on Thursday in Whitesville.

Whitesville Trinity’s Abigail Payne beats the tag from Apollo’s Lily Logsdon during the first inning on Thursday in Whitesville.

Apollo’s K’Asia Palmer pitches in the first inning against Whitesville Trinity during action on Thursday in Whitesville.

Whitesville Trinity’s Allie Barnett pitches in the first inning against Apollo on Thursday in Whitesville.

After a back-and-forth battle in the first few innings, the Apollo High School softball team pulled ahead and held off Whitesville Trinity for a 9-8 victory on Thursday evening in Whitesville.

Arianna Ramirez went 2-for-5 with a double, a home run, three runs batted in and two runs scored to pace the E-Gals (14-13), while Morgan Julian finished 3-for-5 with two runs and an RBI.

Courtney Hagan went 2-for-4 with two RBIs for Apollo, Morgan Frizzell finished 2-for-3 with a double, two runs and an RBI, and K’Asia Palmer and Olivia Crawford each added two hits with an RBI and a run.

“That’s always fun when you can get contributions up and down the lineup,” E-Gals coach Stephen Julian said. “That’s what you’re looking for. It’s getting toward the end of the season, and the girls are starting to gain that confidence at the plate.

“One through nine tonight, I felt like all the girls were seeing the ball well and getting good, quality at-bats.”

Apollo wasted little time out of the gate, plating three runs in the top of the opening frame behind RBIs from Ramirez (double), Palmer and Frizzell (double).

The Lady Raiders (17-10) answered back in the bottom of the inning behind RBI doubles from Cassidy Morris and Katherine Hibbitt. Hibbitt later scored on a passed ball, and an RBI groundout from Allie Graham gave Trinity a 4-3 edge.

The E-Gals notched three more runs in the second. Morgan Julian’s RBI base hit tied the game, and Ramirez clubbed a two-run homer to left field to put Apollo up 6-4.

Trinity again had a response in the bottom of the second, with Madison McDaniel drawing a walk and later scoring on an error, Hibbitt driving in a run with a base hit, and Raylee Higdon’s RBI groundout putting the Lady Raiders on top, 7-6.

Crawford hit an RBI base hit in the top of the third, and Hagan’s RBI single powered a two-run fourth to provide Apollo a 9-7 advantage.

Allie Barnett’s RBI single in the sixth brought Trinity to within a run, and the Lady Raiders had a chance to force extra innings or win in the seventh — with the tying run on third and the winning run on first — but Apollo shortstop Lily Logsdon scooped up a groundball and forced the final out at second base to seal the win.

“Our pitchers weren’t as sharp as they probably could’ve been, but (Trinity) did a good job of scoring runs and putting a little bit of pressure on the defense,” Stephen Julian said. “Hat’s off to them for that. We walked way too many tonight, but that’s part of it sometimes. A win’s a win.

“I was excited that our girls scored more runs than they had been. We had to score runs tonight.”

Hibbitt finished 4-for-5 with two doubles, three runs and an RBI for the Lady Raiders, Morris went 3-for-4 with a double, two runs and two RBIs, and McDaniel was 2-for-2 with a double and two runs.

“I thought we played well,” Trinity coach Jack Melton said. “We’ve had a long week. We played Monday, Tuesday, Wednesday and today. We had a doubleheader earlier this week against Webster County, so we’re a little tired but I’m proud of the way they played. They played a great ballgame.

“We hit well from top to bottom. (The top of the lineup) get us going, and the bottom half came though tonight when we needed them to — laid down some big bunts fo us to move runners.”

Acts of kindness lift up Uvalde community after mass shooting

Her car CRASHED through a FROZEN LAKE... Did you know these stars almost DROWNED?!