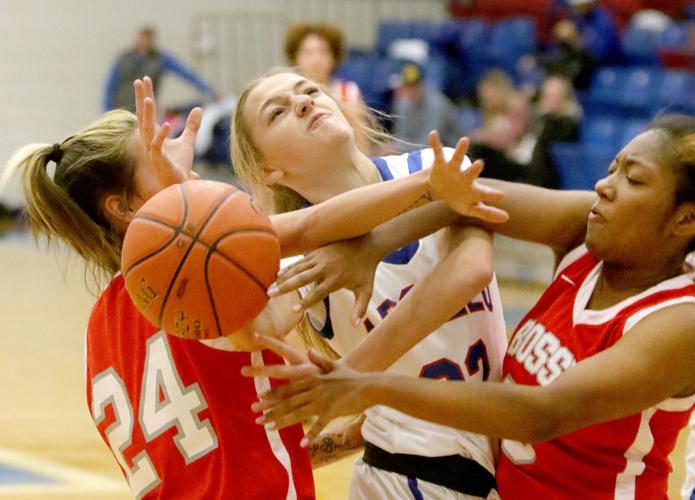 Apollo’s Abby Sapp is fouled as she drives to the basket by Evansville Bosse’s Jasmine Morse, left, and Amaya Stowe during Monday’s game at Eagle Arena. 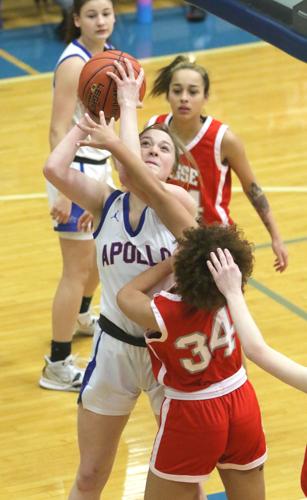 Apollo’s Abby Sapp is fouled as she drives to the basket by Evansville Bosse’s Jasmine Morse, left, and Amaya Stowe during Monday’s game at Eagle Arena.

The E-Gals scored the first 20 points of the game and never looked back in a matinee victory Monday afternoon at Apollo High School.

Jenna Dant poured in a game-best 29 points with 10 rebounds to lead the E-Gals to an 85-36 romp over visiting Evansville Bosse. Dant connected on 14-of-16 shots from the field, with seven of her rebounds coming on the offensive end.

“Jenna Dant was effective on the boards,” Apollo coach Natalie Payne said. “I had no idea she had 29 (points), but she finished all her shots around the basket. She was cleaning up some messes, so that was good. She’s really been coming on for us.”

Bosse (0-17) woke up in the second quarter, with Shaleah White scoring six of her team-best 11 points, but the Lady Bulldogs couldn’t overcome Apollo’s 13-3 run to open the quarter. The E-Gals extended their lead to 44-16 at halftime behind seven points from Dant in the period.

Apollo scored 21 of the first 25 points of the third quarter, forcing a KHSAA-mandated running clock in the process — on Dant’s offensive rebound and putback for a 58-21 lead with 4:48 left in the frame. The E-Gals led 72-26 heading into the fourth quarter.

Even with reserves playing the majority of the fourth quarter, Apollo didn’t miss a beat. The E-Gals outscored Bosse 13-10 down the stretch for the game’s final margin.

“I thought we did a good job of sharing the basketball,” Payne said. “We tried to work on a few different things, mix up our defense a little bit. We were comfortable. When the ball goes in the hole, everything seems to work out and you gain confidence that way. We’re trying to come together and put all our moving parts together this week.”

“That says something about us being for each other, making one more pass and really sharing the ball,” Payne said. “When we’re able to do things like that, no matter our opponent, it just spreads. I’m just happy about that.”

The victory was the third straight and fifth in the last six outings for Apollo, which returns to action Friday against Owensboro Catholic. With a month remaining in the regular season, Payne feels confident about where her team stands.

“We’re starting to figure out our identity and we’re starting to really gain some confidence on the defensive end and execute offensively,” she said. “Over this past week, we were able to beat Henderson, which was a huge win for us here at home, and Daviess County on Friday, two really good teams. That’s given us confidence, and I think that’s just going to continue to carry over.”

'Somebody should have slapped him': Texas A&M coach slams Nick Saban