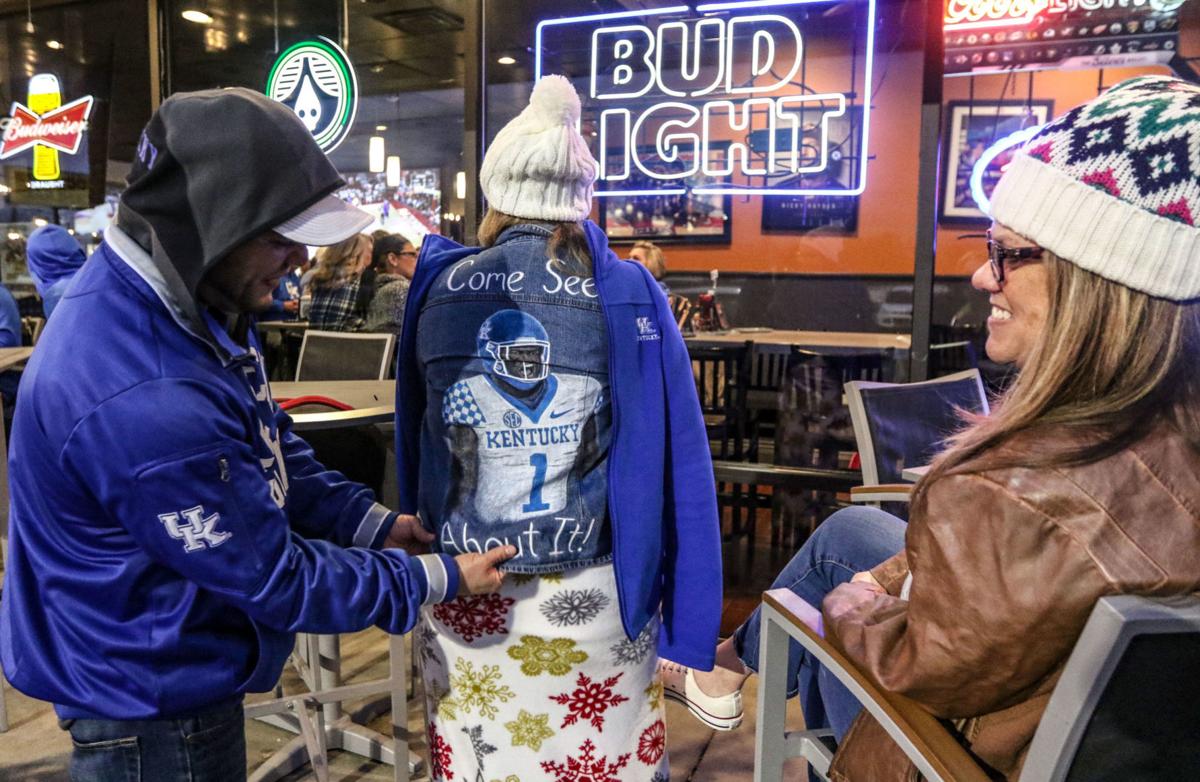 Danny Palmer, left, shows off the back of a jacket he painted for Tara Paradotto, middle, with a depiction of University of Kentucky quarterback Lynn Bowden and the saying “Come see about it,” as Jennifer Webb of Owensboro looks on, at right, on Saturday as the three waited in line to meet Bowden at Legends Sports Bar & Grill. 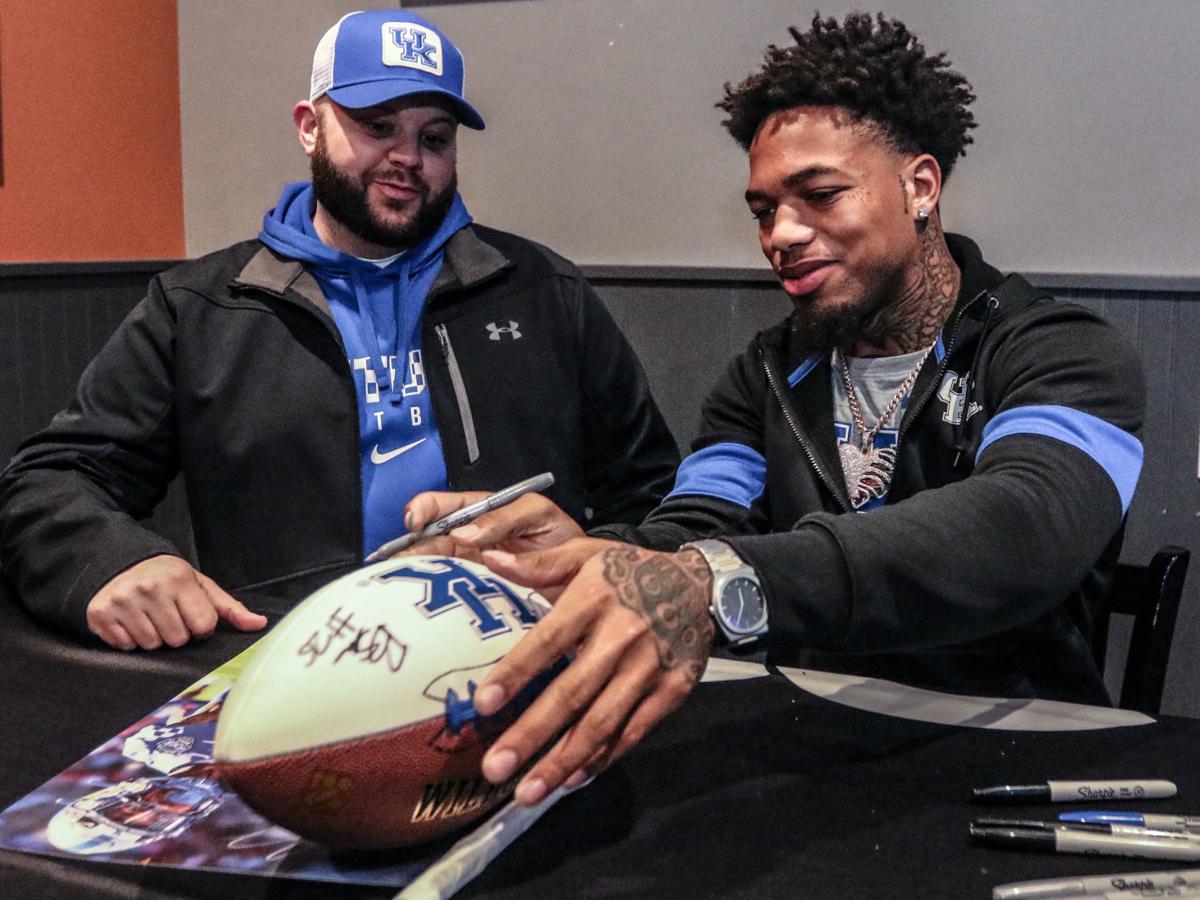 Danny Palmer, left, shows off the back of a jacket he painted for Tara Paradotto, middle, with a depiction of University of Kentucky quarterback Lynn Bowden and the saying “Come see about it,” as Jennifer Webb of Owensboro looks on, at right, on Saturday as the three waited in line to meet Bowden at Legends Sports Bar & Grill.

Lynn Bowden doesn’t want to take anything for granted.

The University of Kentucky junior, who led the Wildcats to an 8-5 record and a 37-30 victory in the Belk Bowl on Dec. 31, is soaking up everything he can before heading to the NFL.

Bowden, a 6-foot-1 receiver who spent the last eight games of Kentucky’s season at quarterback, was in Owensboro on Saturday evening to meet fans and sign autographs at Legends Sports Bar & Grill. As soon as he entered the building, restaurant patrons burst out into applause.

“It’s beautiful,” said an appreciative Bowden, who declared for the NFL draft on Dec. 9 but still played in his team’s bowl game. “I get to meet them face to face instead of on the field or in the stands. It’s a beautiful thing just to be able to see everybody in their face.”

Bowden, who won the Paul Hornung Award given to the nation’s most versatile player, wrapped up his record-breaking collegiate season with 233 rushing yards and two touchdowns against Virginia Tech in Charlotte, North Carolina. He also completed 6-of-12 passes for 73 yards, including the game-winning TD throw with 15 seconds remaining.

By that time, however, the Youngstown, Ohio, native was no stranger to big-time performances.

His 1,468 rushing yards landed him second on UK’s all-time single-season rushing list. He ran for 200 yards on three separate occasions, tying him with Kentucky great Moe Williams. He helped guide the Wildcats to a 6-2 record as the starting signal-caller and finished with 4,660 all-purpose yards for his career — good for fifth in UK history.

Along the way, Bowden set the school record for career and single-season rushing yards by a quarterback, broke the Southeastern Conference’s single-game rushing mark by a quarterback, ran for the second-highest single-game rushing total in program history and ran for at least 100 yards in seven of eight starts — coming up just one yard short of the century mark against Georgia.

It’s not hard to see why fans are infatuated with him.

“It was the funnest thing I ever got to experience in my life,” Bowden said of the past season. “That’s my position (quarterback), I love that position. Just being able to play it at the next level and being able to win games for the team, it was crazy.

“I’m grateful. You got a lot of fans out here coming to see me. I’m blessed to have a lot of support from all these people.”

Despite all of the success UK experienced in 2019, Bowden tries not to think about it too much.

“I’m trying to really hold on to it as long as I can,” he explained. “I really don’t wanna be emotional, but it’s been an emotional year for us.

“We overcame adversity. We did a lot of things people didn’t expect us to do. We won eight games without our two quarterbacks. It’s just something to be thankful for.”

It won’t be long, however, until Bowden is getting ready for the NFL draft — set for April 23-25 in Las Vegas.

NFL experts are projecting him as a third-round pick, but in the meantime, he’s only focused on doing everything possible to improve his draft stock.

“I gotta grind real hard,” Bowden said. “The combine’s coming up and my pro day, so I’m trying to go as hard as I can. I’m grinding real hard right now.”

Just getting to this point has been incredible, Bowden added, but he’s ready to start a professional career and serve as a role model to all the kids back home.

“It’s great,” Bowden said. “I got my brother and my cousin here with me. For me to be able to show them different things and not just the Youngstown mindset, I’m grateful for that.”