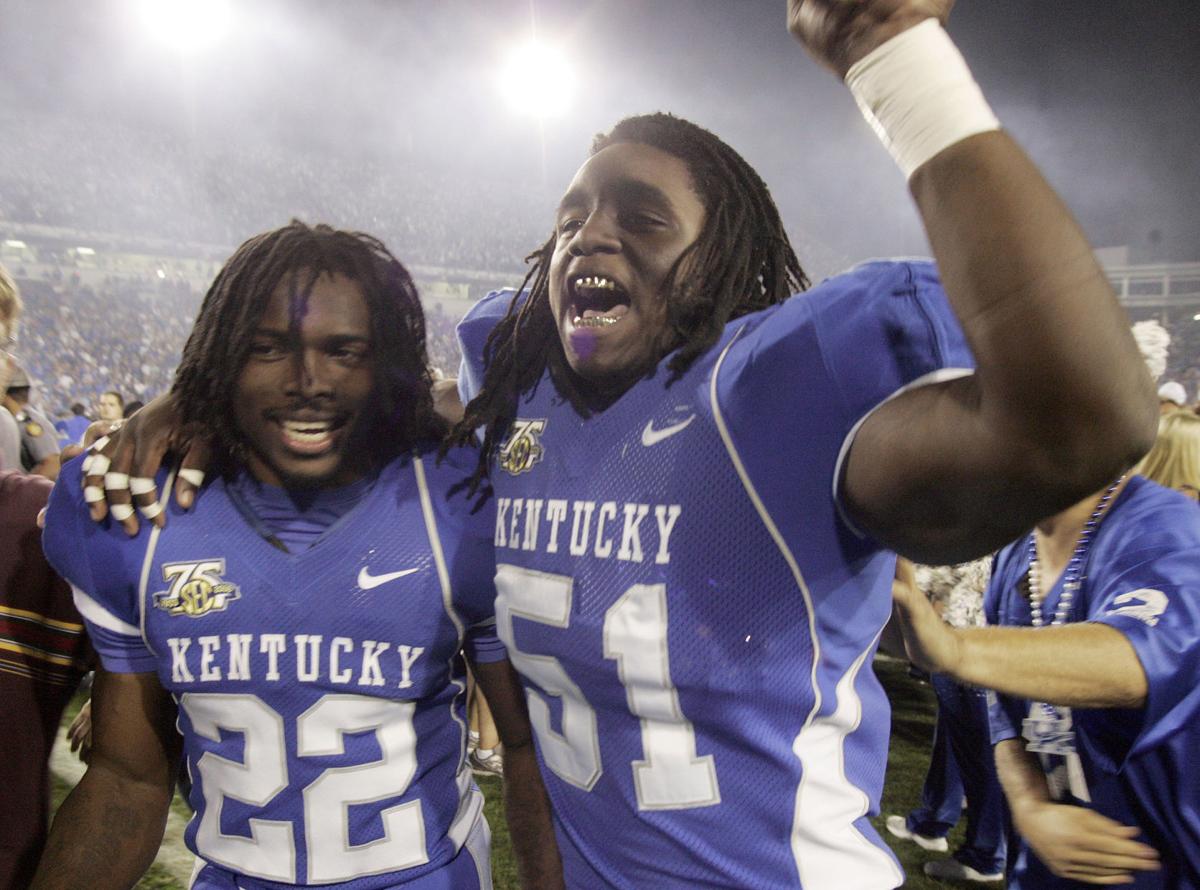 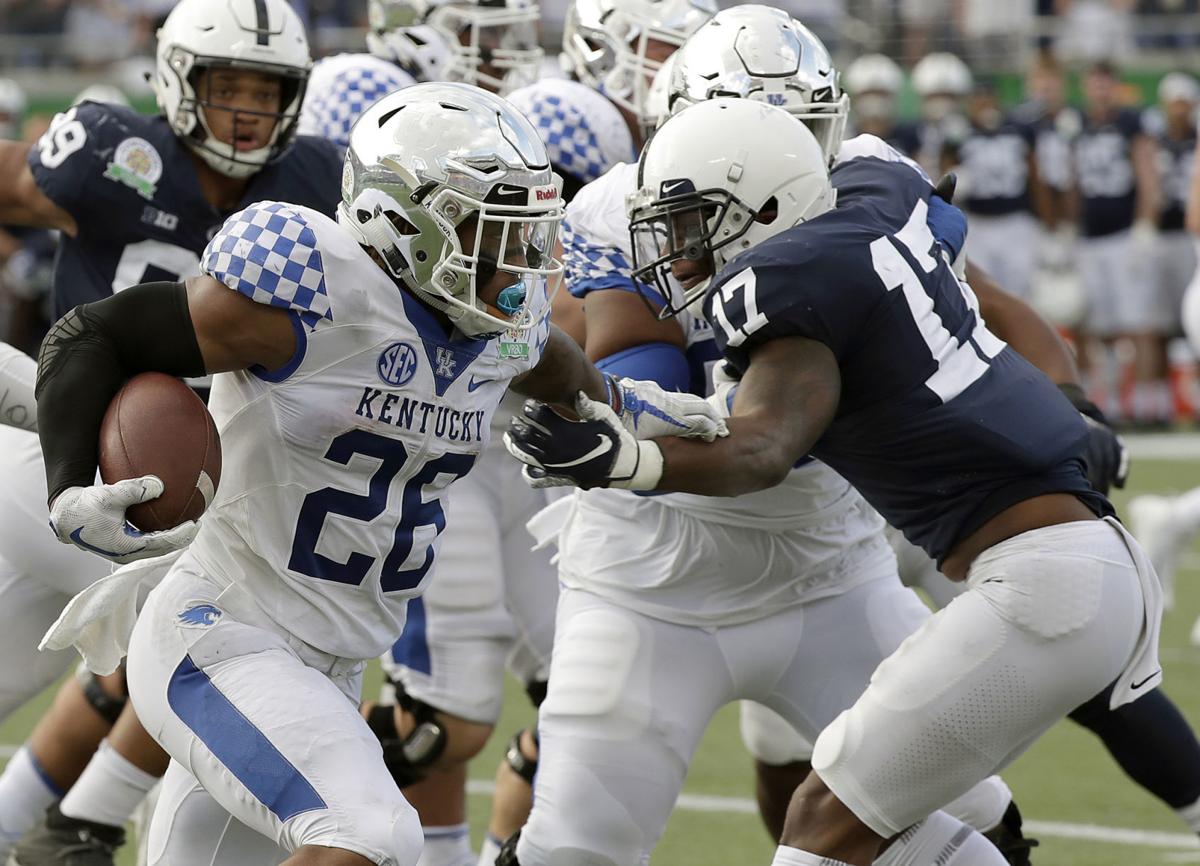 Kentucky running back Benny Snell Jr. (26) runs against the Penn State defense during the second half of the Citrus Bowl NCAA college football game on Jan. 1, 2019, in Orlando, Fla.

Kentucky running back Benny Snell Jr. (26) runs against the Penn State defense during the second half of the Citrus Bowl NCAA college football game on Jan. 1, 2019, in Orlando, Fla.

Since the turn of the century, coaches and players at the University of Kentucky have worked to build a consistently successful program.

It’s been an up-and-down 20 years for the Wildcats, who will look to extend their stretch of four consecutive winning seasons when the next college football season kicks off — whenever that might be.

There’s been plenty of heartbreak during that period, of course, but the signature wins Kentucky captured will forever be cherished by its fans.

Here’s a look back at the top 10 Kentucky football wins since 2000.

Andre Woodson threw for 250 yards and scored four total touchdowns — including a 7-yard strike to Stevie Johnson in the third overtime period — to give No. 17 Kentucky a 43-37 triple-overtime victory over top-ranked LSU on Oct. 13, 2007, in Lexington.

The victory was the third win over a top-ranked school in program history and its first since 1964.

For the game, Woodson completed 21-of-38 passes with three passing TDs and an interception, along with an additional score on the ground. Johnson finished with 134 yards and one TD on seven receptions.

Despite the loss, LSU went on to win the Southeastern Conference championship and the BCS national title.

After what probably seemed like an eternity, the Wildcats finally snapped a 31-game losing streak to Florida when UK upended the No. 25 Gators 27-16 on Sept 8, 2018, in Gainesville, Florida.

In his first-ever road start, Terry Wilson threw for 151 yards with two touchdowns and rushed for 105 yards with another score, while Benny Snell recorded 175 rushing yards.

Trailing 21-16 within the final minute of play, Florida’s drive was halted when linebacker Josh Allen stripped quarterback Feleipe Franks on a pass attempt, and safety Davonte Robinson scooped up the fumble and scored on the 30-yard return — with coach Mark Stoops waving him on.

3-Making history at the Citrus Bowl

Benny Snell became Kentucky’s all-time leading rusher, and the No. 16 Wildcats wrapped up their first 10-win season in 41 years with a 27-24 victory over Penn State on Jan. 1, 2019, in Orlando, Florida.

Snell rushed for 144 yards and two touchdowns, and Lynn Bowden scored on a 58-yard punt return, to help Kentucky build a 27-7 advantage before holding off the Nittany Lions’ late rally. Snell’s performance gave him 3,873 career rushing yards, putting him atop UK’s record books.

Stephen Johnson threw for 338 yards with three touchdowns and led the Wildcats with 83 yards on the ground as UK upset eventual Heisman Trophy winner Lamar Jackson and the No. 11 Cardinals 41-38 on Nov. 26, 2016, in Louisville.

With the contest tied at 38, UK linebacker Courtney Love recovered a Jackson fumble inside the red zone with 1:45 remaining. Johnson then directed a seven-play, 60-yard drive — capped off by a 47-yard field goal by Austin MacGinnis with 12 seconds remaining.

Kentucky safety Mike Edwards recorded his second interception of the day when he picked off Jackson in the final seconds. UK wideout Garrett Johnson led all receivers with 164 yards and a pair of TDs on five receptions.

5-Bowden does it again

Lynn Bowden was a revelation under center for the Wildcats last season, smashing numerous school, conference and national records in his revamped receiver-turned-quarterback role.

The 2019 Belk Bowl was no different, when Bowden racked up 233 rushing yards and two touchdowns — capping his day off with a game-winning 13-yard scoring strike to Josh Ali with 15 seconds left — in UK’s 37-30 victory over Virginia Tech on Dec. 31, 2019, in Charlotte, North Carolina.

After the Hokies pulled ahead 30-24 with 12:47 to go, Bowden orchestrated an 18-play, 85-yard drive to set up the game-winning throw. Virginia Tech got the ball back in the final seconds, but UK linebacker Jordan Wright returned a fumble 28 yards to provide the final margin.

6-Getting the best of Spurrier

Mike Hartline threw for 349 yards and four touchdowns, and Kentucky outscored No. 10 South Carolina 21-0 in the second half for a 31-28 victory on Oct. 16, 2010, in Lexington. It was the first time in 17 tries that the Wildcats were able to beat Steve Spurrier, dating back to his coaching days at Florida.

UK wideout Randall Cobb hauled in a 24-yard touchdown with 1:15 remaining, then added a two-point conversion for the game’s final score. Fellow wide receiver Chris Matthews finished with a game-best 177 yards and an additional TD on 12 catches.

After the Gamecocks drove to the UK 20 in the final minute, Wildcats cornerback Anthony Mosley intercepted a pass in the end zone to seal the win.

7-Listen to the music

Andre Woodson threw for 299 yards and three touchdowns, and Kentucky won its first bowl game in 22 years with a 28-20 victory over Clemson in the Music City Bowl on Dec. 29, 2006, in Nashville.

The Wildcats raced out to a 28-6 lead early in the fourth quarter before holding off a late Clemson push. The postseason appearance also ended a six-year bowl game drought for UK.

With his performance, Woodson joined Tim Couch as the only Kentucky quarterbacks to surpass 30 passing TDs in a season — only to break his own mark with a school-record 40 scoring throws the very next year.

Andre Woodson threw for 275 yards and four touchdowns, including a perfectly-thrown 57-touchdown throw to Stevie Johnson with 18 seconds left, as Kentucky knocked off No. 9 Louisville 40-34 on Sept. 15, 2007, in Lexington.

UK running back Rafael Little rumbled for 151 yards and a TD, helping the Wildcats claim their first win over a top-10 opponent in three decades.

Johnson finished with two scoring receptions, and tight end Jacob Tamme added another, as UK snapped a four-game losing skid to the Cardinals.

9-No quarterback, no problem

Without a healthy scholarship quarterback available, the Wildcats turned to wide receiver Matt Roark — long before the days of Lynn Bowden playing QB — to lead UK to a 10-7 victory over Tennessee on Nov. 26, 2011, in Lexington.

Roark rushed for 124 yards, UK running back CoShik Williams scored his team’s lone touchdown, and the Wildcats snapped a 26-game losing skid to the Volunteers.

Kentucky picked off Tennessee quarterback Tyler Bray twice, and the loss dropped the Volunteers out of contention for a third straight bowl game appearance.

Andre Woodson threw for 358 yards and four touchdowns, leading Kentucky to its second straight postseason victory with a 35-28 win over Florida State in the Music City Bowl on Dec. 31, 2007, in Nashville.

It was the first time UK recorded consecutive bowl game victories since Bear Bryant coached the Wildcats to postseason wins in 1949 and 1950.

Kentucky running back Rafael Little rushed for 152 yards, and Stevie Johnson reeled in seven passes for 124 yards and a pair of scores.