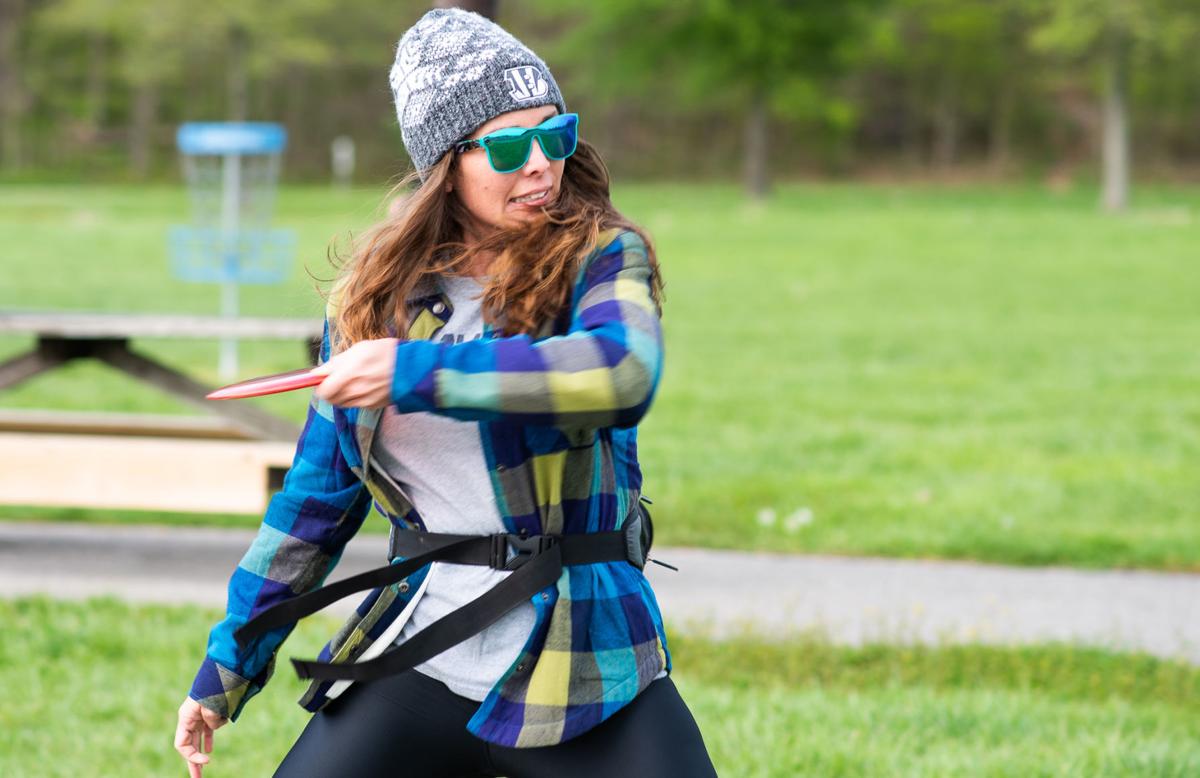 Danielle DeWitt gets ready to throw during a round of disc golf on Wednesday at Panther Creek Park. 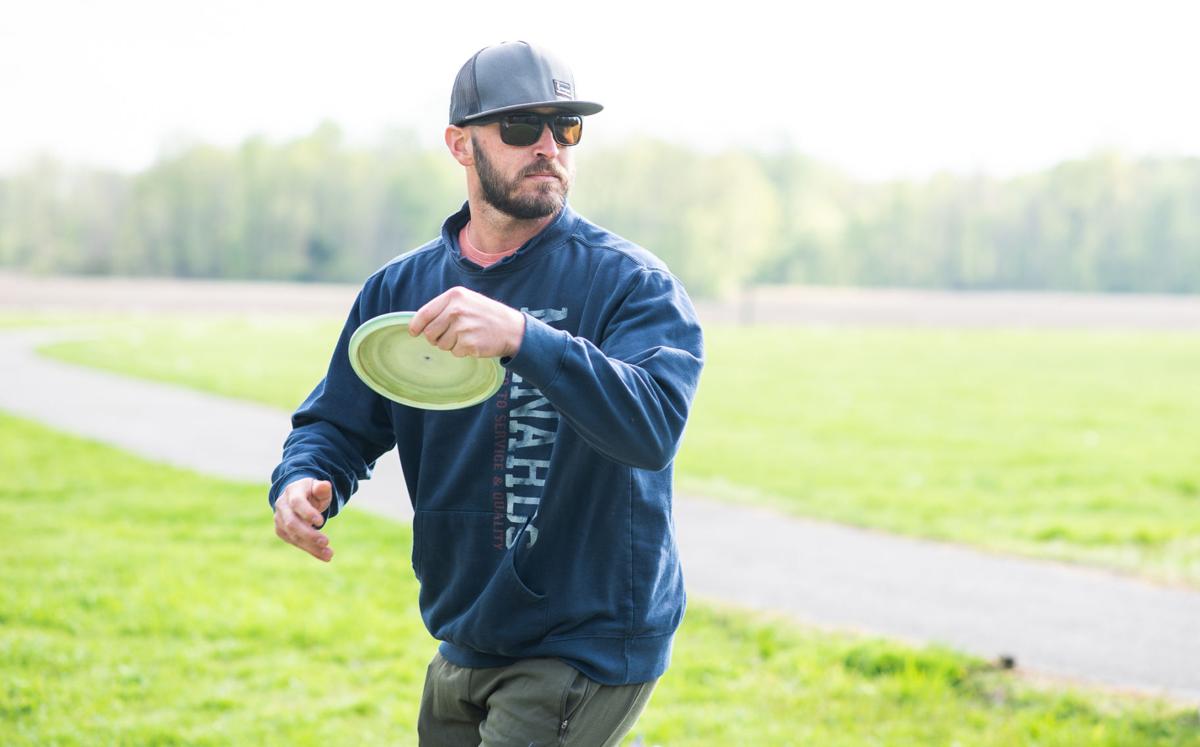 Phillip Sinnett lines up a shot during a round of disc golf on Wednesday at Panther Creek Park. 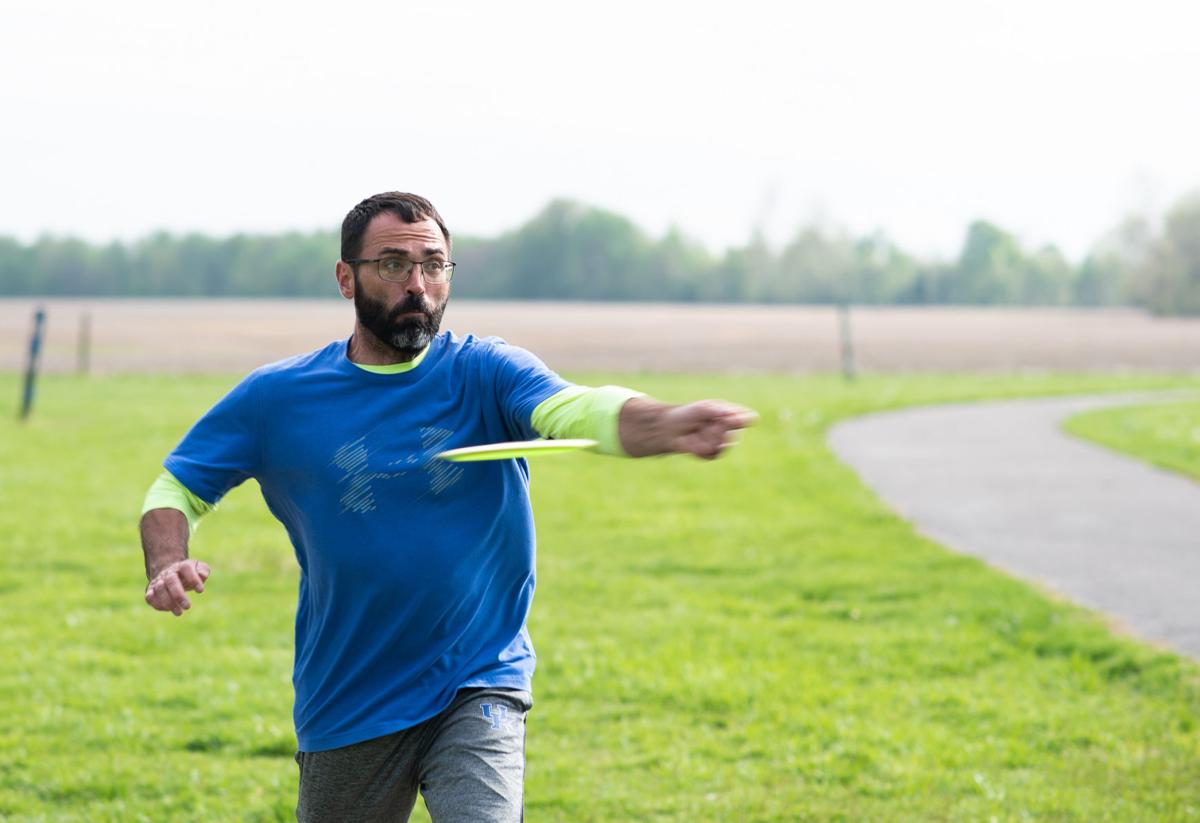 Aaron Sinnett throws a shot during a round of disc golf on Wednesday at Panther Creek Park.

Danielle DeWitt gets ready to throw during a round of disc golf on Wednesday at Panther Creek Park.

Phillip Sinnett lines up a shot during a round of disc golf on Wednesday at Panther Creek Park.

Aaron Sinnett throws a shot during a round of disc golf on Wednesday at Panther Creek Park.

Local club urges newcomers to give sport a shot

The disc golf scene, both locally and nationally, is in the midst of a massive participation boom.

The onset of the COVID-19 pandemic throughout 2020 and 2021 left athletes limited in what they could do. Outdoor sports weren’t impacted quite as drastically as their indoor counterparts, and disc golf, a relatively inexpensive sport to get involved with, naturally drew the curiosity of those who had never played before.

Clevenger said that only four weeks into the 2021 season, the DCDGA has added almost 50 new members.

Typically, they add 75 new members by the end of each year, and the club expects at least another 50 to join before the season’s end. As a whole, the group’s Facebook page lists nearly 650 members.

Though many players initially join for the competitive aspect of the sport, it becomes an activity enjoyed amongst friends more often than not.

“It’s amazing,” said Clevenger, 35, who started playing in 2010. “Everybody that we’ve been involved with that joins the club and becomes an active member turns into family almost. We all welcome newcomers, nobody looks down on skill level or anything, and we all want everybody to learn.”

That doesn’t mean players don’t take it seriously at the same time, though.

“I started out casually and got into the more competitive end of it,” said Kevin Carrico, 61. “Obviously, it’s fun, but there are four things I like: Exercise, being competitive, being outdoors and camaraderie.

“You go for your friends as much as the competition. ... I would hesitate to think of my friends without disc golf.”

Clevenger knows first-hand just how close the disc golf community can be.

“The brotherhood of the community is outrageous,” he said. “I had a heart attack five years ago, and the disc golf community had all kinds of tournaments for me, and they raised thousands of dollars to help me and help with the medical bills. It really was amazing.”

It doesn’t cost much money to get started, either.

“For a beginner player, it’s very inexpensive,” Carrico said. “A lot of the courses here are very beginner-friendly.

“You have some people that just buy a starter pack and go out there and play and have a blast. A lot of times, they want to get better, so they get more involved.”

Clevenger, who lives near Panther Creek Park, drives by the course regularly to see if any newcomers are out playing. If they are, he’ll stop to chat.

“I’ll just go and give them a free bag and give them some free discs to get started,” he said. “I encourage everyone to join the club, and I’ve met hundreds of people in the sport.

“Once you establish a (disc) bag and get that figured out, you won’t spend any more money on equipment unless you lose a disc. If people are interested in getting better, they’ll typically become a competitive disc golfer that will improve their skill level over the course of a year.”

While local participation is up, disc golf has also experienced similar growth nationally.

“When I joined the Professional Disc Golf Association in 2015, there were a little over 70,000 people signed up,” said Zacary Napier, 19, the DCDGA treasurer and son of professional disc golfer and Owensboro native Dutch Napier. “I got some emails today that said it’s closing in on 170,000 members now.”

For Napier, who’s been involved with the sport his entire life, it’s not hard to see what draws people in.

“I’ve been around pretty much since I was born, and my dad turned pro when I was 7,” he said. “A lot of it is the community. Most of the time, it’s a bunch of guys who just want to get out and have a good time — that’s what we’re all about. That’s mainly what’s kept people in it over the years.”

For newcomers who want to join, Napier’s word of advice is to show up. The DCDGA hosts events every week at various courses in the area, and its Facebook page often has posts from others looking to play even when organized events aren’t happening.

As far as upcoming events, Napier is the assistant tournament director of the Ohio County Classic, which will be contested May 15-16 and is still seeking sponsors. Three other tournaments are scheduled for the next few months — the Daviess County Open in July, followed by the Whitesville Classic Tournament and the Daviess County Turkey Shoot later in the year.

All are rated at least C-Tier events, in which players can earn points toward making the PDGA Disc Golf World Championships set for Evansville in July 2022.

Clevenger credited the Daviess County Parks and Recreation Department for helping get the courses in shape for competition.

“Our parks department is incredible,” he said. “When we ask for picnic tables or trash cans or anything like that, it’s usually delivered by the next day.”

These ASL interpreters are fighting for justice and access