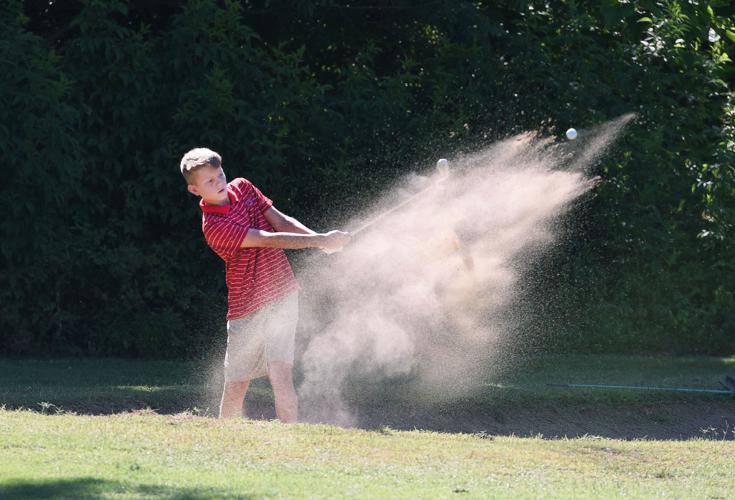 Lemuel Wright, 13, hits out of the greenside bunker on hole No. 1 during his round in the GO Junior Golf Series on Thursday at Ben Hawes Golf Course. 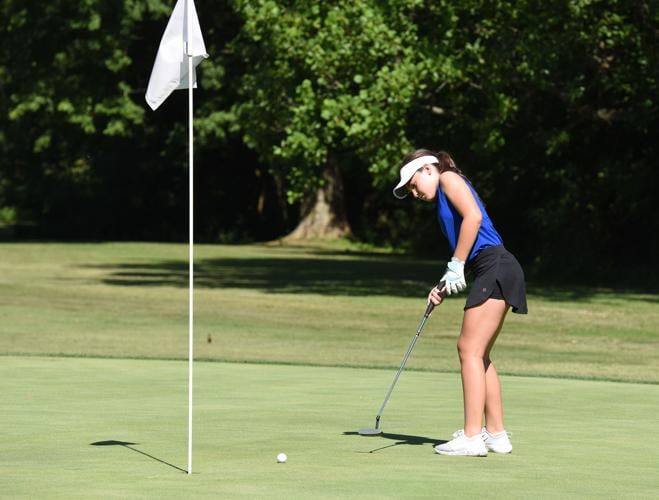 Ainsley Dalton 13, putts on the No. 4 green in the GO Junior Golf Series on Thursday at Ben Hawes Golf Course.

Lemuel Wright, 13, hits out of the greenside bunker on hole No. 1 during his round in the GO Junior Golf Series on Thursday at Ben Hawes Golf Course.

Ainsley Dalton 13, putts on the No. 4 green in the GO Junior Golf Series on Thursday at Ben Hawes Golf Course.

At the midway point of the 2022 Worth Insurance Group/Chick-Fil-A Greater Owensboro Junior Golf Series, tournament director Mark Price has seen an uptick in participation — and he credits the wide cast of competitors, parents, volunteers, course managers and others for helping make it happen.

“It’s been a really good year so far,” Price said following Thursday’s event at Ben Hawes Golf Course, the second stop on the Owensboro swing of the tour. “I’ve had a lot of good help, a lot of good players and a lot of young and developing players coming from not just the Owensboro area but from Madisonville, Hardinsburg and other places. We’re just starting to see an explosion of these golfers from our region.

“That’s really good for our area and what we’re trying to do here.”

Ultimately, what the GO Series seeks to accomplish is teaching the game to younger players and preparing the older golfers for high school tournament play while also providing a fun and laid-back atmosphere. Age groups begin at 8-and-under playing three holes and range all the way to the 13-15 and 16-18 Championship divisions playing full 18-hole rounds.

“We operate on a couple levels here,” Price said. “We have the nine-holes-and-under levels. Those are the ones that we call the developing golfers. We create rules where it helps them, like we have a stroke maximum rule. If they’re having a bad hole, it helps them get past that. They’re just learning the game, they can take an 8 or a 9 and move on.

“The parents at this young division (8-and-under) are fantastic. They not only help their kids, but they help the other kids too. They encourage them. At this level, they get it. That’s one of the things I’m most proud of, is watching the parents and grandparents help their kids learn what goes on here.”

Once players begin moving up year after year, Price said, is where he starts to see the developments take shape.

“As a former high school golf coach, I’m triyng to prepare them for the high school season,” he said. “So we don’t play super-forward tees so we get done early. We back them up, we try to play the 6,500 yards — which is the standard for region and state — and we try to prep them for that.

Following Thursday’s round, golfers and their parents gathered in the shade next to the Ben Hawes pro shop as they waited for final scores. Some of the competitors already knew each other, but several had met just that day and were already quickly becoming friends. It didn’t take long for post-round dinner plans to be made.

“Make it a fun atmosphere, where all of a sudden you get kids from different cities who are getting together,” Price said of his mindset. “We had a group here today where one was from Madisonville, one from Morgantown, one from Beaver Dam. That was the first time I ever paired them together. I caught up with them on No. 16, and they said, ‘Coach, I don’t know what we’re going to shoot today, but this group here, we’re having the most fun out here.’

Charles Whelan, the course manager at Ben Hawes and Hillcrest, enjoys it the GO Series is at one of those courses.

“It’s awesome because it falls in line with all the junior programs that we run here,” he said. “It’s cool for me because when I look at the scoreboard, I can see a lot of the kids that have been through my programs. I really like the fact that so many of the young players are coming in for those three- and six-hole divisions.

“Also seeing all of these older kids sticking with it, it’s good for the future of golf.

“It’s fun to watch, because I’ll get the kids come up to me and they’ll give me their hole-by-hole descriptions of what they did that day. It’s always fun when they’re here.”

And, Price added, he couldn’t do it without help from multiple sources.

“To pull off something like this, it takes a lot of cooperation from those who volunteer to help me, the courses, and everyone working behind the scenes,” he said.

Glastonbury is back! These are the legends and music stars who WOWED Worthy Farm...

‘I've got paper towels crammed into my armpits!' Celebrities and their very honest sweating stories