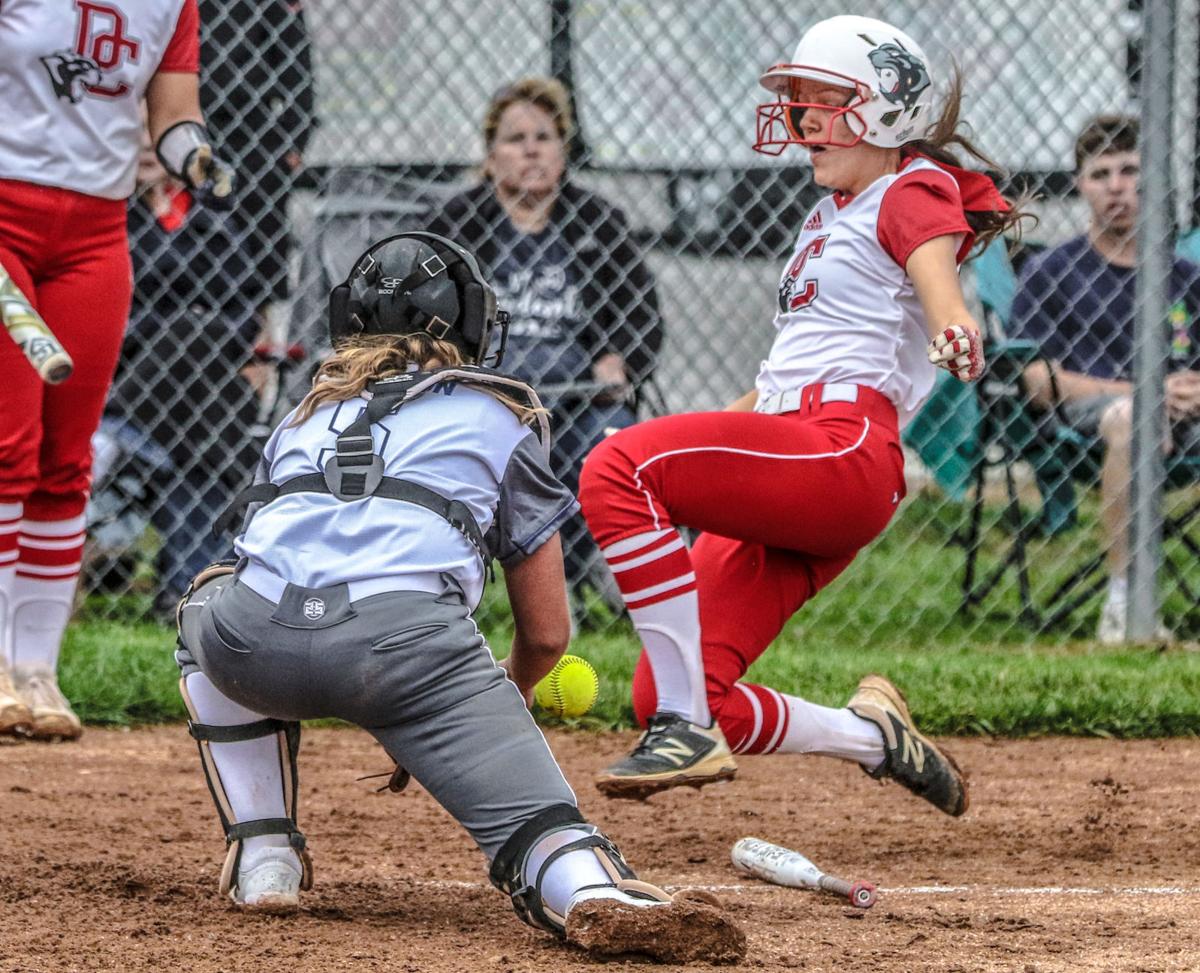 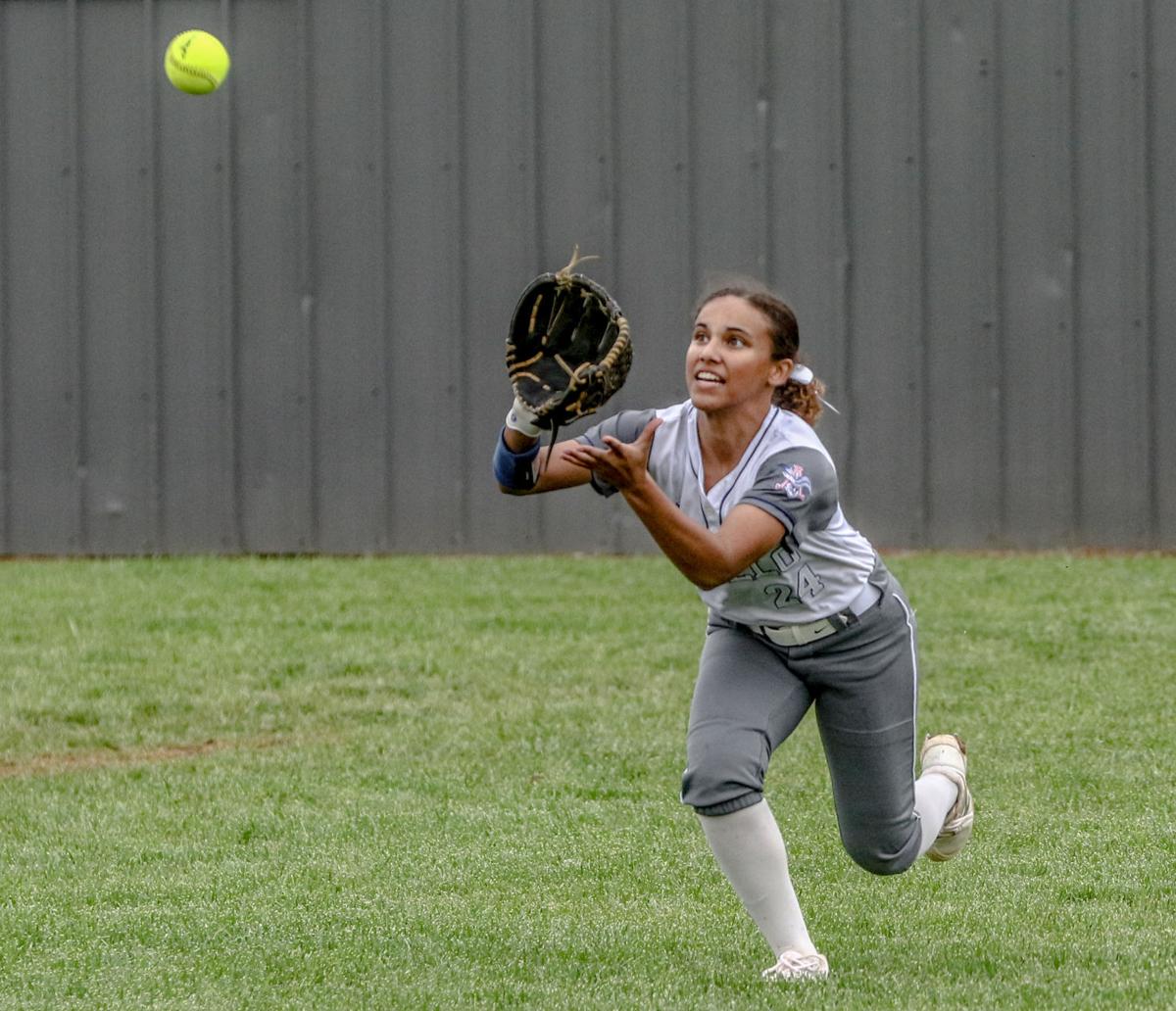 Apollo’s Olivia Crawford chases a fly ball during the third inning against Daviess County on Tuesday at Apollo High School.

Apollo’s Olivia Crawford chases a fly ball during the third inning against Daviess County on Tuesday at Apollo High School.

The Daviess County High School softball team jumped out to an early lead and held off arch-rival Apollo for a 7-3 victory Tuesday night at Apollo’s E-Gal Park.

DC coach John Biggs considered it an improved performance following the teams’ last meeting — a 6-5 Daviess win in which the Lady Panthers had to overcome a late Apollo lead for a walk-off victory.

“We felt like last time, we chased more balls out of the zone than we had to, so we wanted to be patient,” Biggs said afterward. “I thought we were.

“We feel like if we put enough balls in play, hard, then some positive things are going to happen for us.”

The No. 9 Lady Panthers (11-3) opened scoring when Hattie Newman drilled a solo home run over the left-field wall in the second inning. An RBI single by Abby Newman and a sacrifice fly from Seana Leibfried helped build a 4-0 advantage through two innings.

“When you can do that, then I think your pitchers can pitch a little bit easier, knowing it’s not just one mistake and something can happen,” Biggs said of his team’s early lead. “Defense is a little more relaxed. That’s big.”

DC added a run in the fourth when Leibfried drove in Kelsea Roby, who led off the inning with a base hit.

Apollo (4-13) found an answer in the bottom of the fifth when Macy Calhoun, Olivia Crawford and Mallory Velotta hit consecutive singles to load the bases. Morgan Frizzell collected an RBI on a fielder’s choice groundout, Morgan Julian drove in another run with a base hit, and K’Asia Palmer hit an RBI groundout to bring the E-Gals within 5-3.

Apollo coach Stephen Julian was proud to see his players continue to compete, but he pointed to the E-Gals’ five errors as a cause for concern.

“We battled back, that was good to see,” he said. “We had a couple errors in the last inning, gave them a couple more insurance runs.

“I feel like we’re getting there, we just need to shore up our defense. Our defense has been a letdown this year. Finding the right kids in the right spots come tournament time, that’s the goal.”

DC plated two runs in the top of the seventh — taking advantage of two Apollo miscues. Greysee Whiteker had an RBI base hit after Jessie Daniels reached on an E-Gals error and advanced on Hattie Newman’s sacrifice bunt. Whiteker scored the game’s final run on a passed ball after advancing to second on an error and then to third on a groundout.

“A lot of people look at us as just a power team and we’re going to score a bunch of runs,” Biggs said, “but we’ve been working extremely hard on the short game too. I’m extremely happy we got some bunts down too. That’s something down the road that could make the difference between a win and a loss.”

Hattie Newman, Leibfried and Whiteker all went 2-for-3 for the Lady Panthers, with Leibfried adding two RBIs. Roby scored twice, as well, and Whiteker earned the pitching win after going 41/3 innings, striking out four and scattering five hits.

Crawford went 2-for-3 for Apollo, which finished with five hits.

“We’ve got to shore up our defense and keep competing,” said Julian, whose team plays again Friday against Owensboro Catholic. “(DC) is a great ballclub, and I feel like we were right there with them, minus two innings.”

DC returns to action Wednesday with a trip to Heritage Hills (Ind.), followed by four weekend contests in the Best of the West tournament in Bowling Green.

“We’re still trying to figure some things out and extend our bench a little bit,” Biggs said. “We just need to play and keep taking steps forward.”

'It's disgraceful': Officer on people who spread lies about Capitol riot

CNN gets look inside Arizona recount