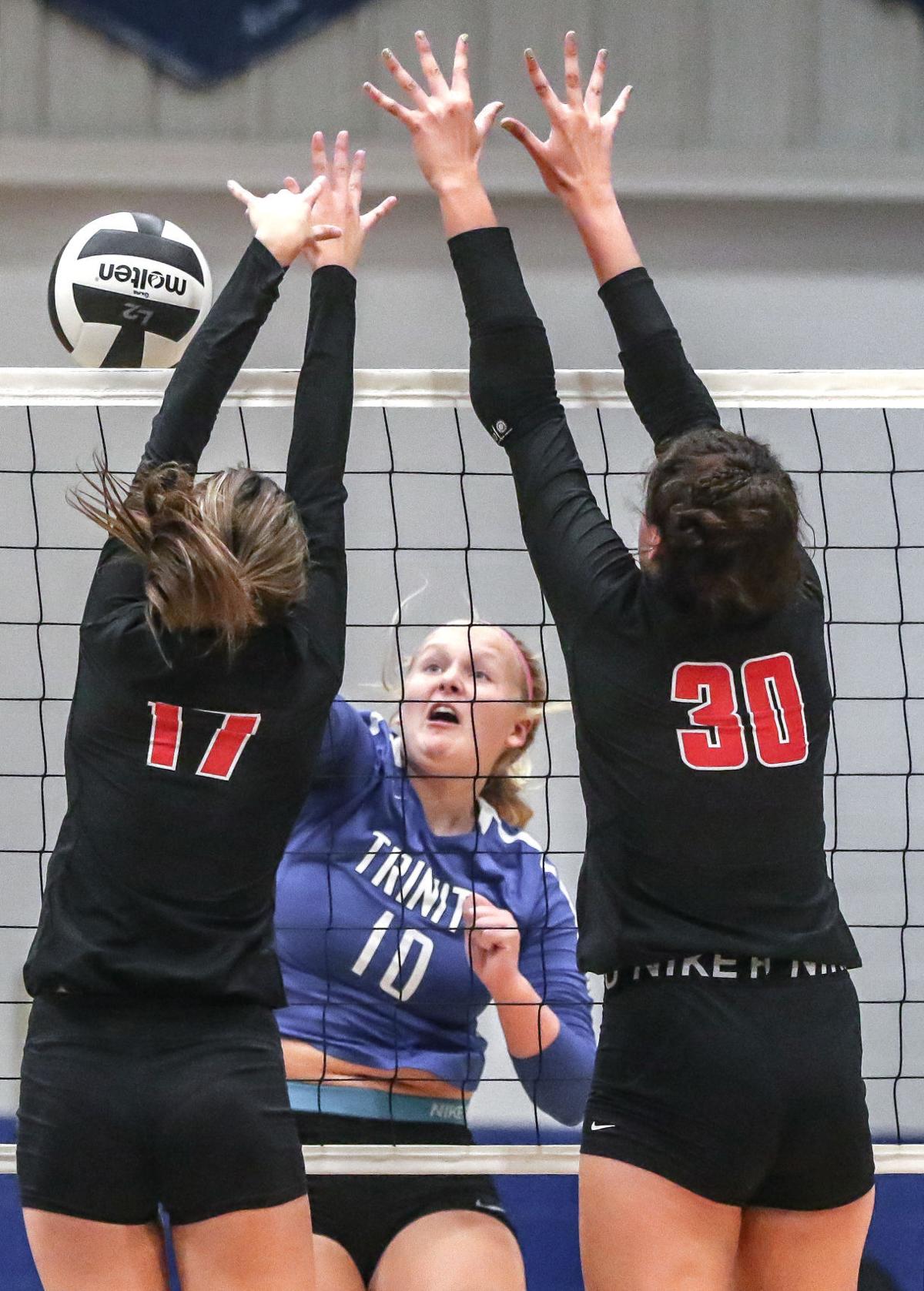 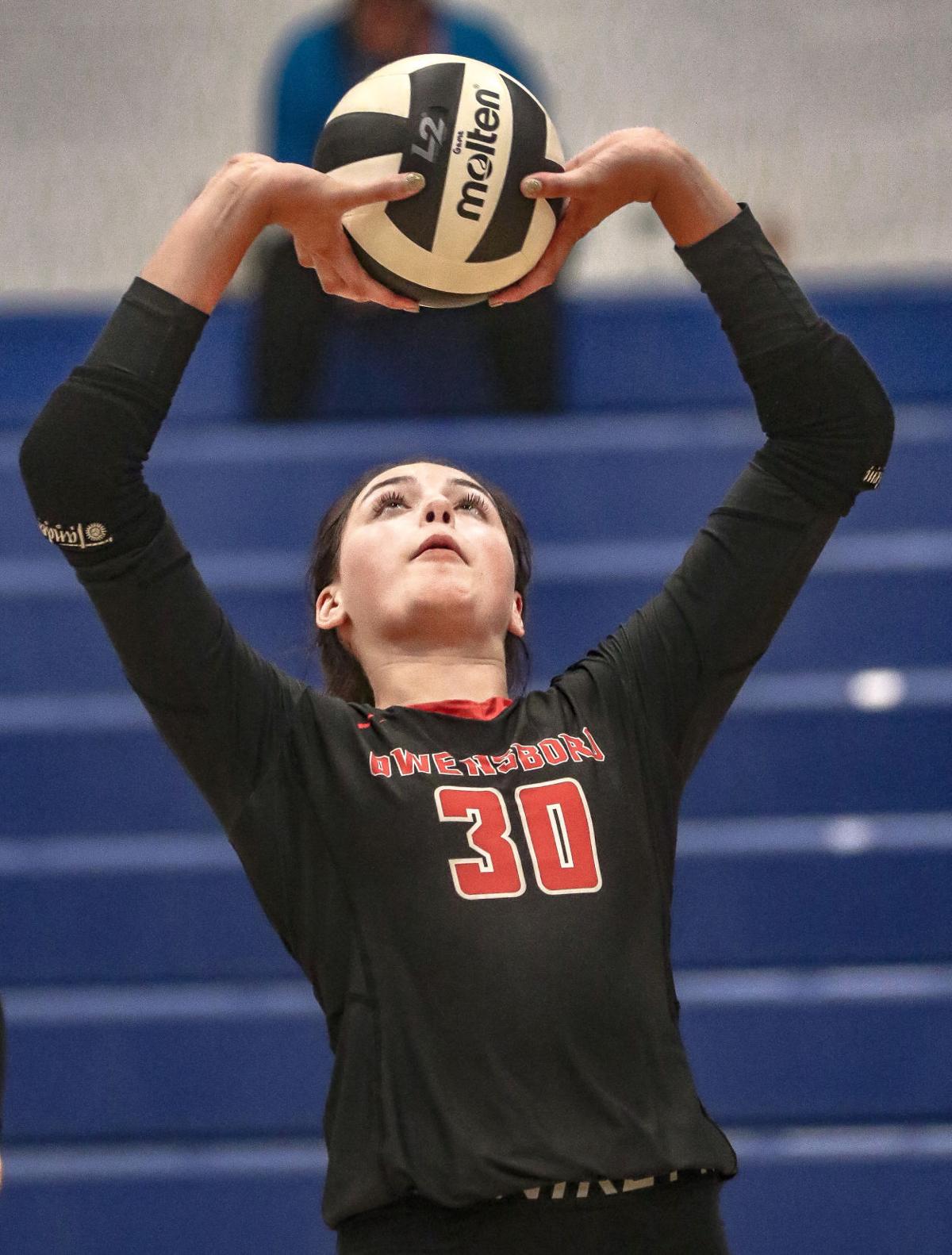 Owensboro’s Maya Joska sets the ball during action against Whitesville Trinity on Wednesday at St. Mary of the Woods Horn Community Center.

Owensboro’s Maya Joska sets the ball during action against Whitesville Trinity on Wednesday at St. Mary of the Woods Horn Community Center.

With his team coming back from an extended hiatus, Whitesville Trinity High School volleyball coach Daniel Morris was curious to see how the Lady Raiders would perform Wednesday night.

Despite the respite, though, Trinity showed it hadn’t missed a beat in a hard-fought 25-16, 26-24, 25-19 win over Owensboro at the St. Mary of the Woods Horn Community Center in Whitesville.

Following a 5-5 tie in the first set, the Lady Raiders (22-4) reeled off a 16-4 run — a stretch that included three aces from Abby Payne — that helped them set the tone early with an opening-set victory.

“We’ve got to stay aggressive,” Morris said of his message to his players. “The more aggressive we are, the better we play.

“It boosts their confidence. It’s hard to play from down five, six points. The old Trinity team, we’d dig ourselves a hole, but this year we worked on getting out on top.”

In the second set, neither team could establish more than a two-point lead until midway through. Three consecutive points helped Owensboro (19-13) claim a 17-14 advantage, but the Lady Raiders responded with a 5-0 scoring outburst of their own.

The Lady Devils pushed back in front for a 24-23 edge, but Trinity won three straight points for the come-from-behind win.

Trinity exploded out of the gates in the third set, taking a 9-1 lead behind Payne’s service. However, three serving aces by Owensboro’s Kennedy Thompson sparked an 8-0 run to tie the game. After battling to a 19-19 stalemate, the Lady Raiders closed the set on a 6-0 surge to wrap up the overall victory.

“We just had to stay focused and stay locked in and continue to play the way we play,” Morris said.

According to OHS coach Melissa Hibbs, much of her team’s struggles came as a result of unforced errors.

“We hit quite a few balls out, into the net, missed serves, and you can’t do that against a strong team,” she said. “I thought we came out flat in the first two sets, showed a little bit more energy in the third set, but then again, the unforced error saga continued at the end.”

Payne finished with 22 digs and six aces, Taylor Pedley made 19 digs, Bailey Millay chipped in three digs, and Corli Mills had a kill.

“Really, our defense was really good tonight,” Morris said. “I think Abby Payne and Taylor Pedley both played extremely well in order for us to set up some offense. Again, Hannah Nash and Cassidy Morris — those are our power hitters — and we play a lot better with them in the game.”

“Everyone’s going to have rough nights like this, and we hope we got it out of our system going into next week,” Hibbs said. “We came out a little tired today, and we have another game tomorrow to regroup. We’ll fine-tune some things, but I still feel really good heading into (postseason play).”

Both teams return to the hardwood Thursday, with Owensboro hosting Muhlenberg County and Trinity traveling to take on Union County.

Powell balked at the GOP's 'dark vein of intolerance'

Kamala Harris: Powell broke barriers that were not easy to break

Apple is bringing back some old MacBook Pro features