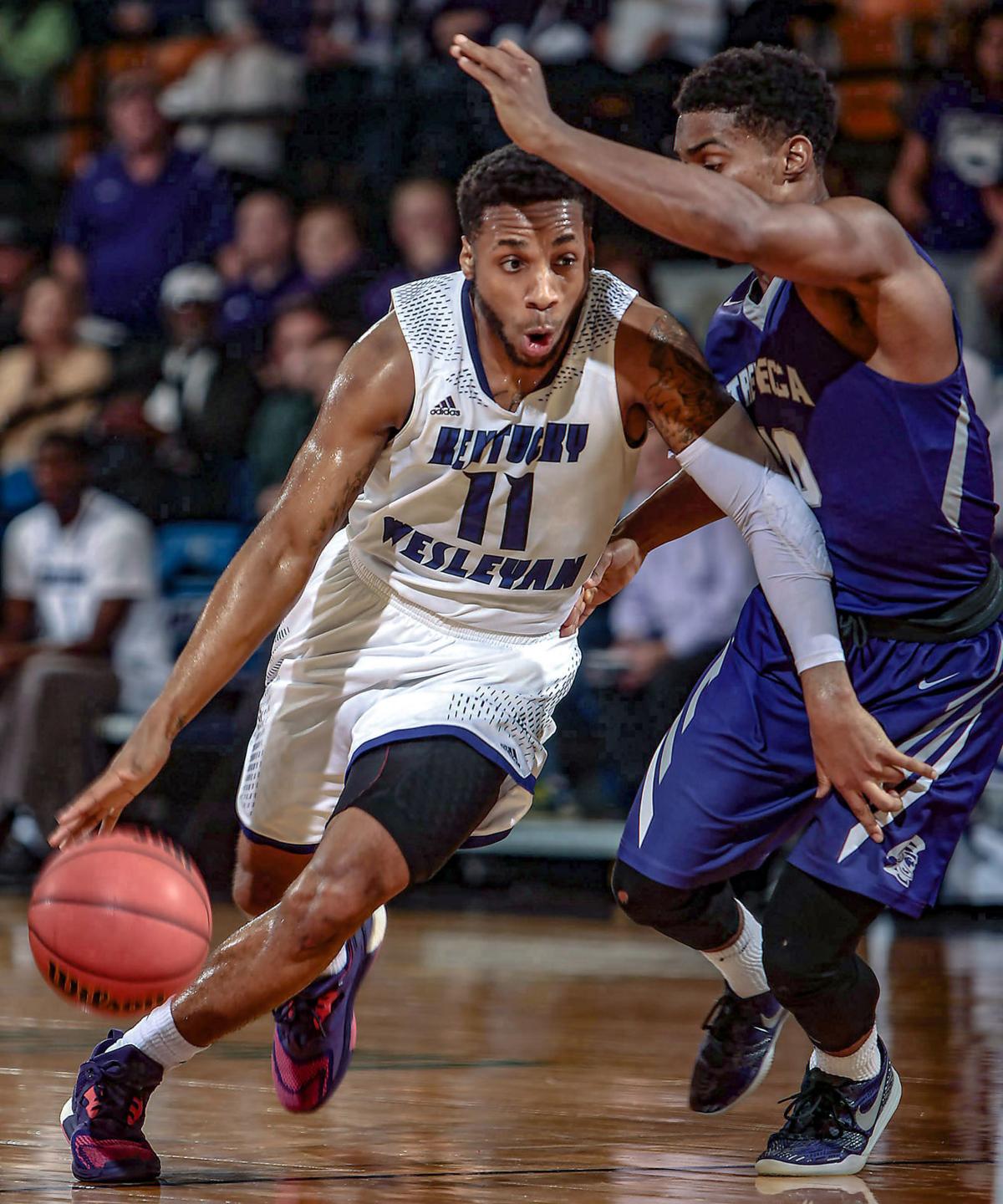 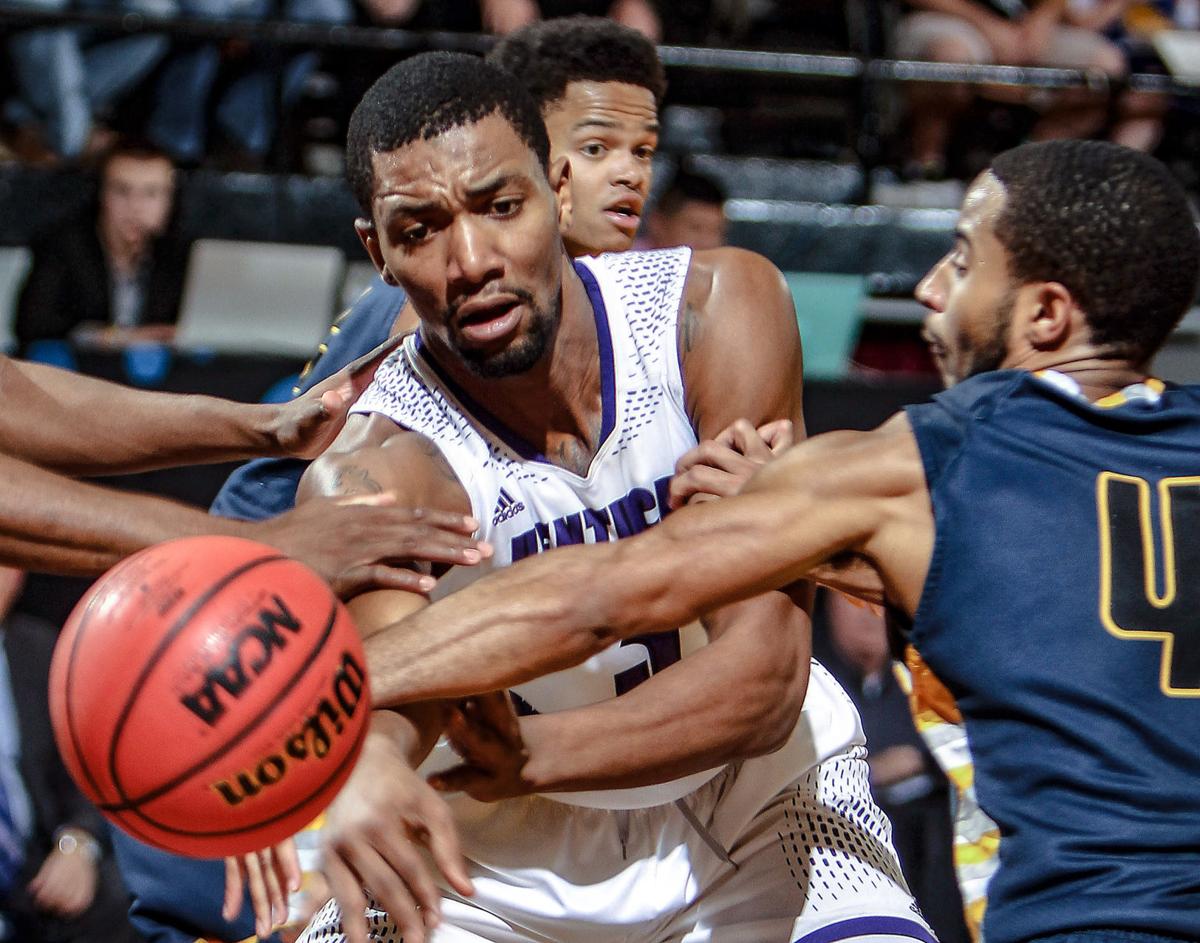 KWC forward Sam Williams passes out of a defensive trap by Alderson-Broaddus defenders during the Great Midwest Athletic Conference title game on Mar. 4, 2017, at the Sportscenter. Williams chipped in 14 points to help the Panthers to a 91-63 win, which qualified them for the NCAA Regional Tournament.

KWC forward Sam Williams passes out of a defensive trap by Alderson-Broaddus defenders during the Great Midwest Athletic Conference title game on Mar. 4, 2017, at the Sportscenter. Williams chipped in 14 points to help the Panthers to a 91-63 win, which qualified them for the NCAA Regional Tournament.

With the never-ending cycle of college basketball programs — new faces coming in and old faces going out every year — most coaches, student-athletes and fans are always looking to the future. The Kentucky Wesleyan College men’s basketball program is no different.

However, it’s impossible to move forward without taking into account the results of the past. Some are treasured memories for all those involved, while other moments still invoke emotions of heartache and misery.

It’s never a bad idea to take a stroll down memory lane, so here are 10 of the top KWC games over the past five seasons.

Senior guard Ken-Jah Bosley poured in 29 points with eight 3-pointers to become the third-leading scorer in Kentucky Wesleyan College history, and a dominant second half allowed the No. 7 Panthers to cruise to a 91-63 win over Alderson Broaddus in the 2016-17 G-MAC championship game at the Sportscenter.

After leading by just three points at halftime, the Panthers outscored Alderson Broaddus 51-26 after intermission — shooting 60% from the field and limiting the Battlers to 34% shooting in the process. Junior forward Sam Williams and senior forward Jordan Jacks chipped in 14 and 11 points, respectively.

Although it won’t go into the “official” record books due to being an exhibition, the Panthers played one of their most exciting games of the last decade in a 103-97 double-overtime loss to Western Kentucky at E.A. Diddle Arena in Bowling Green.

After regulation ended in a 75-75 tie, KWC went up 93-90 on a pair of foul shots by junior guard Shaakir Lindsey with seven seconds left in overtime. Western’s Pancake Thomas drilled a 3 to force a second extra period, and the Hilltoppers pulled away from there.

After reaching the Great Midwest Athletic Conference tournament championship game twice and falling short against Alderson Broaddus both times, the Panthers finally broke through in 2015-16.

The victory ended a three-season NCAA Division II Tournament drought for the Panthers, who erased an eight-point first-half deficit with a 14-0 run and never looked back.

Even on the road against No. 1 seed and host Hillsdale in the first round of the 2019-20 Great Midwest Athletic Conference tournament, the Panthers weren’t deterred.

Sophomore guard Wyatt Battaile, senior guard Adam Goetz and sophomore center Sasha Sukhanov scored 19 points apiece to lead Wesleyan in a 80-72 victory, which then sparked the Panthers’ semifinal win over Malone and their run to the conference tournament championship game.

Two late 3-pointers by Battaile helped keep the Chargers at a distance down the stretch, and Wesleyan drained 14-of-17 free throws to seal the victory.

The loss snapped a 26-game winning streak — the second-longest of the season across the entire NCAA — and was the last time Wesleyan reached the NCAA Tournament in the previous three years.

Bosley hit three straight 3-pointers to pull KWC within two points with 13 seconds to go, and after a Quincy free throw, Bosley had a chance at the game-tying 3. However, he missed the shot after a physical block attempt from Quincy and a no-call decision from the officials.

Perhaps the Panthers’ most defining win of the year, Wesleyan edged the visiting Chargers 67-66 in its 2019-20 Senior Day home finale at the Sportscenter after trailing by seven points at halftime.

A 14-2 run put the Panthers up 58-51 with seven minutes left, until Hillsdale took the lead with a 15-7 run of its own — setting the stage for Sukhanov’s late heroics.

Although Kentucky Wesleyan fell 85-81 to Southern Indiana at the inaugural Small College Basketball Hall of Fame Classic at the Ford Center in Evansville, it was the first chance the Panthers had to face their former rival in three seasons.

The two programs had been bitter foes in the Great Lakes Valley Conference, but KWC’s jump to the G-MAC left the series in jeopardy.

A 24-9 run in the final six minutes of the contest pulled KWC back into contention, with two free throws from junior guard Adam Stanford putting the Panthers up 79-78 with 57 seconds to play. USI’s Jeril Taylor hit a 3-pointer to push his team back into the lead, and KWC senior guard Ken-Jah Bosley misfired on a 3 on Wesleyan’s final possession.

The Panthers raced out to a 21-10 lead in their first NCAA Division II Tournament appearance since reaching the Midwest Region final in 2012, but KWC couldn’t hold off top seed and host Wisconsin-Parkside in a 74-65 loss in Somers, Wisconsin.

Senior point guard Marcus Fillyaw hit two free throws to tie the contest at 57 with 4:45 to play, but Wisconsin-Parkside scored 14 of the next 18 points to pull away for good.

PANTHERS COME CLOSE VS. NO. 4 LMU

Though the Panthers came up short in a 77-75 loss at the Sportscenter, the meeting against national powerhouse Lincoln Memorial was the Panthers’ first glimpse of what they could ultimately achieve by the end of the year.

Senior guard Adam Goetz scored 18 points, junior forward Stew Currie posted 15 points with 10 rebounds, and Wesleyan held a 61-56 lead midway through the second half. A 15-4 scoring outburst put the Railsplitters in position for a come-from behind victory, but KWC didn’t go away.

Currie hit a pair of free throws to tie the game at 75 with 14 seconds remaining, but LMU’s Cameron Henry scored on an offensive rebound and putback in the final seconds for the win.

Dzierzawski scored the last six points of the contest for the Panthers, including a 4-for-4 mark from the free-throw line in the final 21 seconds.

Dr. Fauci channels 'The Godfather' in response to Trump

Why Pennsylvania court ruling is a win for Democrats