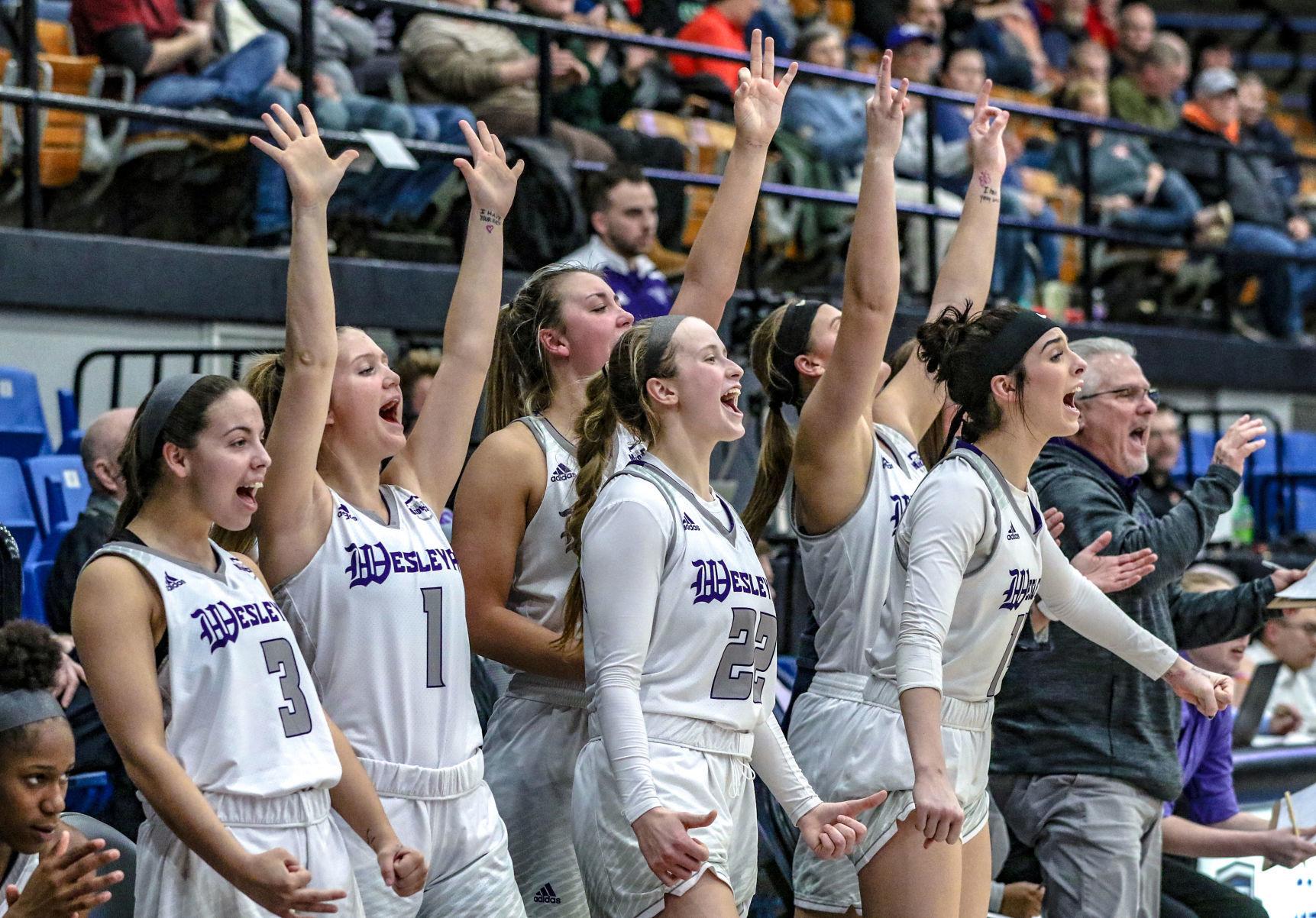 The Kentucky Wesleyan women’s basketball team celebrates during the final minutes of a game against Findlay on Feb. 6 at the Owensboro Sportscenter. 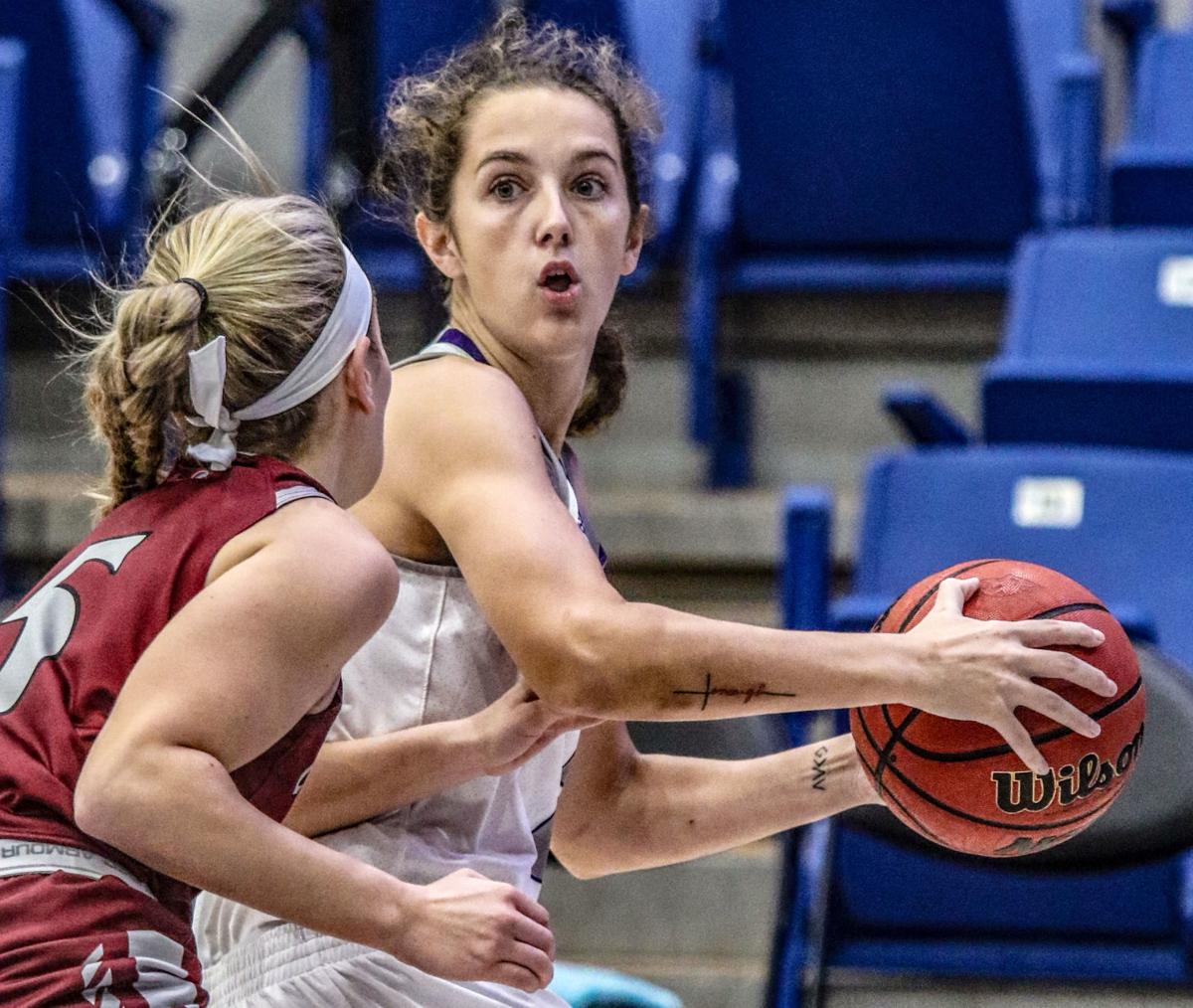 Kentucky Wesleyan’s Emma Johnson looks to pass while defended by Lindenwood Belleville’s Macey Smith on Nov. 27 at the Owensboro Sportscenter.

The Kentucky Wesleyan women’s basketball team celebrates during the final minutes of a game against Findlay on Feb. 6 at the Owensboro Sportscenter.

Kentucky Wesleyan’s Emma Johnson looks to pass while defended by Lindenwood Belleville’s Macey Smith on Nov. 27 at the Owensboro Sportscenter.

Currently in the midst of one of the best seasons in program history, the Kentucky Wesleyan College women’s basketball team continues to rise in the national polls.

The Panthers, who broke into the NCAA Division II Top 25 Coaches Poll for the first time on Feb. 4, are now the 18th-ranked team in the country. With last week’s 89-54 dismantling of Alderson Broaddus, KWC jumped four spots and now sits at 24-1 overall — tying the program record for wins in a season, which was set last year.

The Panthers are also No. 5 in the Midwest Region rankings, which were released Sunday.

Despite all of the attention, Wesleyan’s 11 straight wins and even its 32 consecutive home victories, the Panthers’ attention remains firmly on the task ahead.

“I think the whole thing right now is ‘Let’s finish this thing and then look back at the journey,’ ” said KWC co-head coach Caleb Nieman. “We can’t find our identity in the rankings, because it’s not under our control. So why focus on it?

“We’re just interested in the end, when they select the 64 teams (for the NCAA Tournament). Those rankings are important. We don’t have total control over that either, but we can do our part.”

Even with their outstanding record, the Panthers still sit in second in the Great Midwest Athletic Conference with a 15-1 mark — trailing league leader Walsh, which gave KWC its lone loss on the season.

With only three games remaining in the regular season, however, the Panthers aren’t wasting any time looking back. Instead, KWC coaches and players are focused on adding an exclamation point to what’s already been a landmark campaign.

“It’s cool to have some recognition, because we do work really hard,” said junior wing Emma Johnson, a former standout at Daviess County High School. “It’s nice to be recognized, but it’s just a number. At the end of the day, if we have to go play Walsh in the conference championship or anyone else we have to play, it’s gonna be the same intensity, no matter where we’re ranked or what our record is.

So far, that laser-sharp focus has yielded dividends for the Panthers.

Wesleyan features the second-highest scoring offense in the conference (81.5 ppg) and the league’s top defense (54.8 ppg), which allows them to beat opponents by an average of 26.8 points per game — six points better than Walsh.

And, Johnson added, it’s been a load of fun along the way.

“This is all kind of brand new for me,” said Johnson, now in her second year at KWC after transferring from Murray State. “I had teams that were close in high school. My first year in college, I didn’t have a team like this. Ever since I came here, it’s been all fun.

“Everybody wants what we have right now, and it’s awesome. We take moments to realize what we really have, but we just want to keep going.”

According to co-head coach Nicole Nieman, being ranked won’t stop her players from striving for improvement, either.

“I think it’s important for the team, for the players,” she said. “For all of their hard work to be recognized, that’s the cool part. Obviously, we don’t buy into the rankings and all that, because rankings don’t matter. You gotta go out, and you gotta play. You gotta perform and do things the right way.

“At the end of the day, the ranking doesn’t help you win a game. The things that we stick to every day — keep working hard and sticking together, things that we can control — those are the things we’re gonna focus on, but definitely proud of the girls and what they’ve been able to accomplish this season.”

Keelie Lamb, a senior wing averaging a team-high 13.4 points and 5.4 rebounds per game, admitted that getting ranked was a nice moment — but it doesn’t mean anything if Wesleyan doesn’t have a strong close to the season.

“We try not to look at the rankings, but to get that, it was like ‘Man, that’s really big,’ ” Lamb said. “We were excited about it, but we have to stay focused on us and worry about us to keep it rolling.

“I just feel really honored to be here and to be part of this team. It’s really special.”