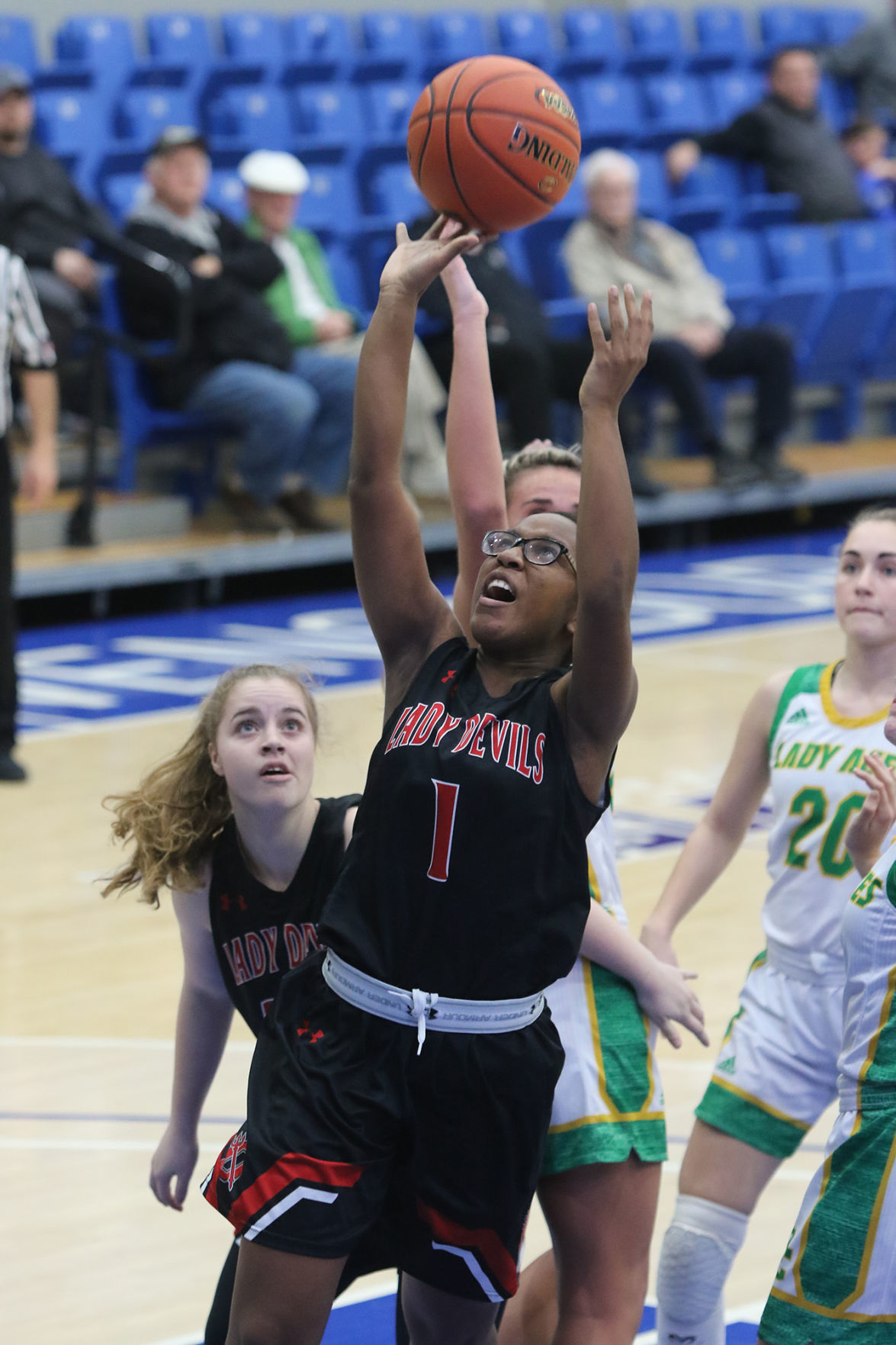 Owensboro’s Tamia Smith drives to the basket against Owensboro Catholic during the 9th District Girls Tournament Monday at the Sportscenter. 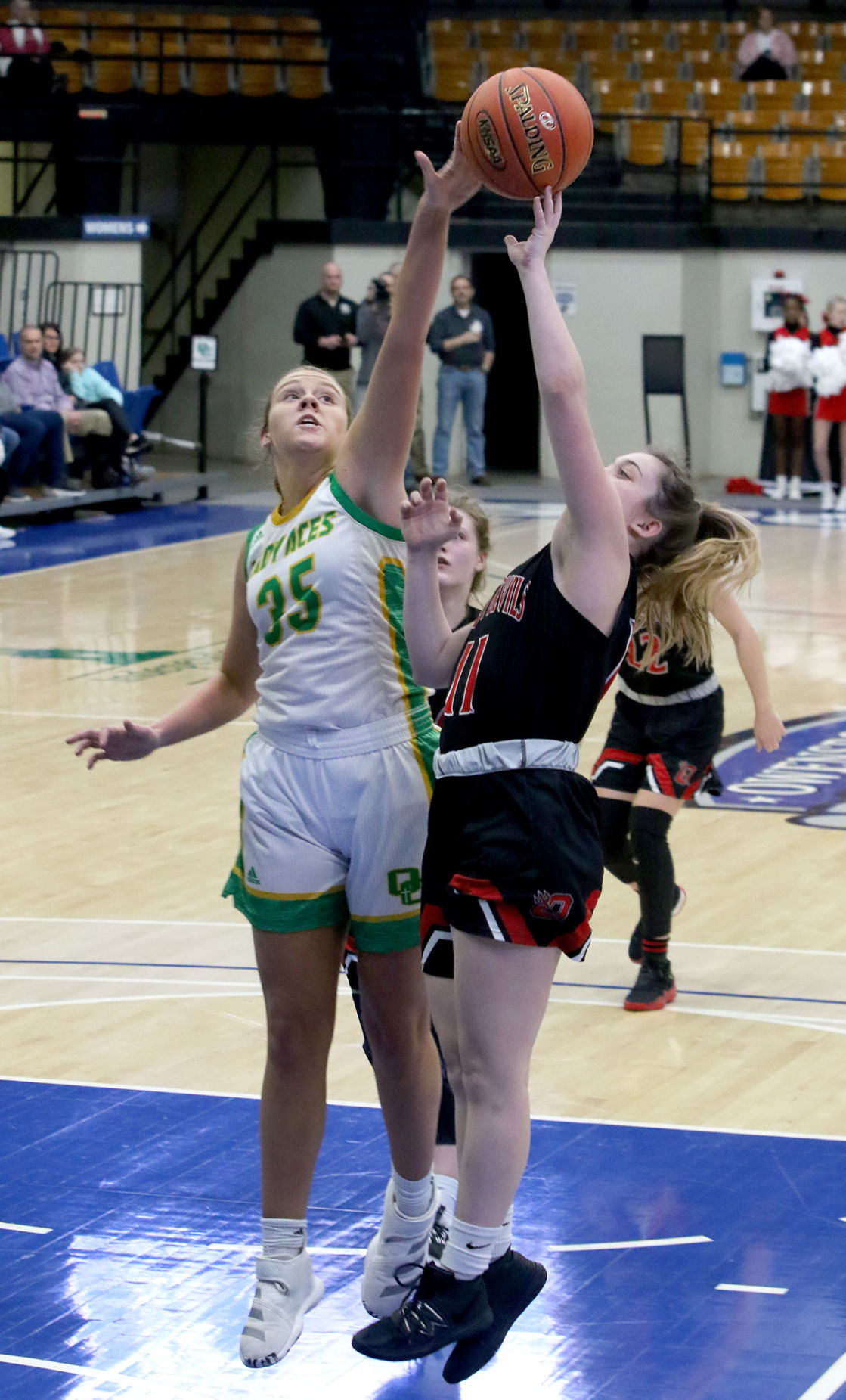 Owensboro Catholic’s Ally Maggard blocks a shot by Owensboro’s Katerina Hrabalikova on Monday during the first round of the 9th District Tournament at the Sportscenter.

Owensboro’s Tamia Smith drives to the basket against Owensboro Catholic during the 9th District Girls Tournament Monday at the Sportscenter.

Owensboro Catholic’s Ally Maggard blocks a shot by Owensboro’s Katerina Hrabalikova on Monday during the first round of the 9th District Tournament at the Sportscenter.

The top-seeded Lady Aces did just that and more, zipping out to a 22-2 first-quarter lead on the way to claiming a 58-19 victory over Owensboro at the Sportscenter.

With the win, Catholic (21-10) advances to Thursday’s district title game to face No. 2 seed Apollo (21-8), which moved on after defeating Daviess County.

“We really worked to get off to a good start, that’s something I really focused on,” Lady Aces coach Michael Robertson said afterward. “We did a good job in our press early and making them play a little bit faster than they wanted to, and got down and got some easy shots.

“Isabella Henning got us off to a real good start with seven points there, and that was big for us.”

Henning and Hannah McKay combined for 17 points in the first eight minutes, and McKay added eight points in the second period to help the Lady Aces build a 38-11 advantage at intermission.

Catholic outscored the Lady Devils 14-8 in the third quarter for a 52-19 advantage before substitute players closed out the final frame.

According to Robertson, Monday’s outing was a positive first step as Catholic looks for a deep playoff run.

“That’s the biggest game of the year, the first round,” he said. “That either makes your year, or you end up being a bust for the most part. It doesn’t matter what your record is, it’s 0-0 when that starts. You got one chance to win a game, and if you lose, you go home. Fortunately for us tonight, we did enough to get the win.”

A’Lyrica Hughes scored six points to lead Owensboro, which was plagued by 24 turnovers. Nia Gonzo and Brooklyn Williams hauled in five rebounds apiece. The Lady Devils end their season at 5-25.

As the Lady Aces prepare for Thursday’s matchup against Apollo, Robertson simply wants to see his team clean up little mistakes as it looks for a third consecutive district championship. Both teams split the regular-season meetings, with Catholic winning 50-48 at the Sportscenter on Dec. 13 and the E-Gals winning 72-59 on Jan. 17 at Eagle Arena.

“First thing, we’ve got to rebound the ball a little bit better,” Robertson said. “We gave up way too many offensive rebounds. We’ve got to take care of the ball. There at the end, we had our younger girls in there and I think we had more turnovers than we had shots. I can’t have that. ... If you turn the ball over, you can’t score.”

It also can’t just be one or two players, Robertson noted.

“We’ve struggled to score most of the year,” he said. “Defensively, we’ve been pretty solid but offensively, we’ve struggled at times if Hannah’s not scoring 30 or 20 points a game. We’re having other people step up. Spencer Harvey, Isabella Henning stepped up, Catherine Head’s done well for us, Ally Maggard — we just need everyone to step up and be ready to play.”