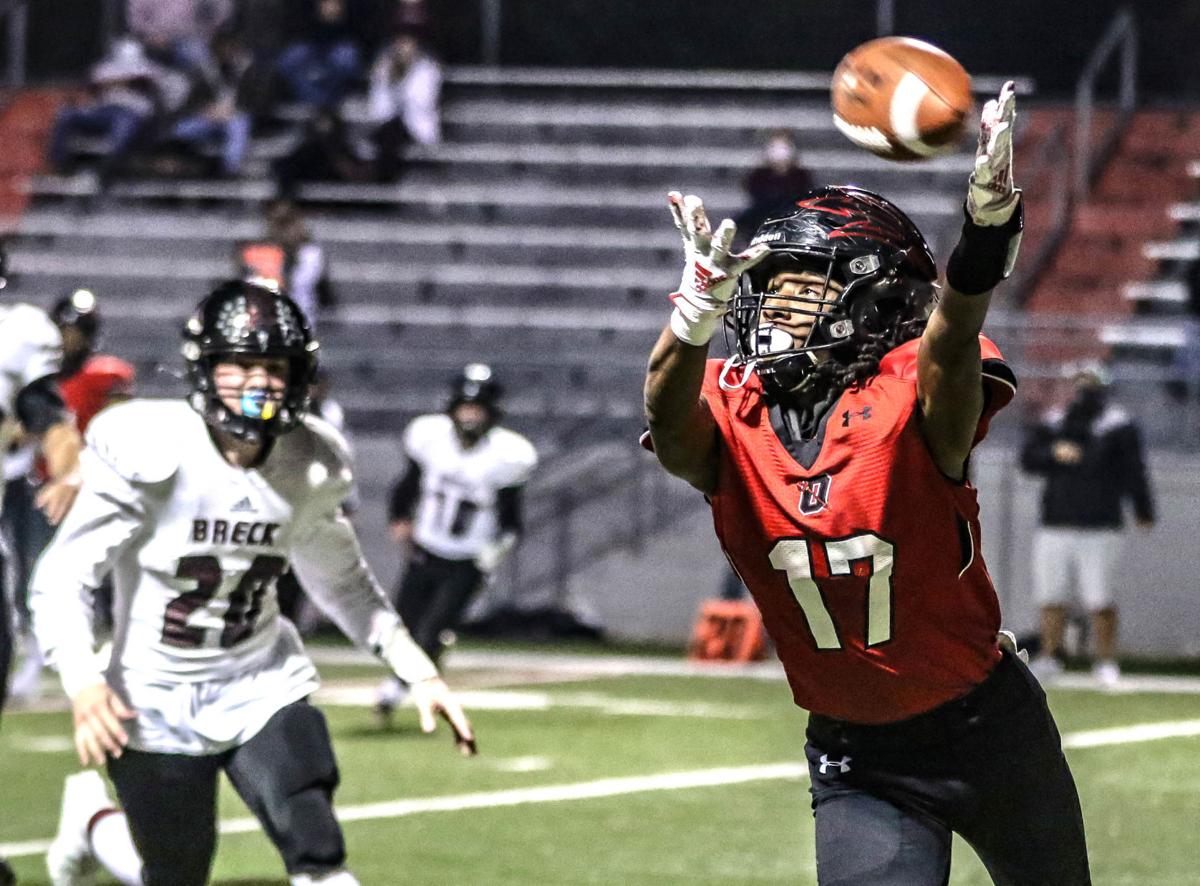 Owensboro’s Khalil Rogers leaps for a pass from Gavin Wimsatt in the first quarter Friday against Breckenridge County during action in the Class 5-A playoffs at Rash Stadium. 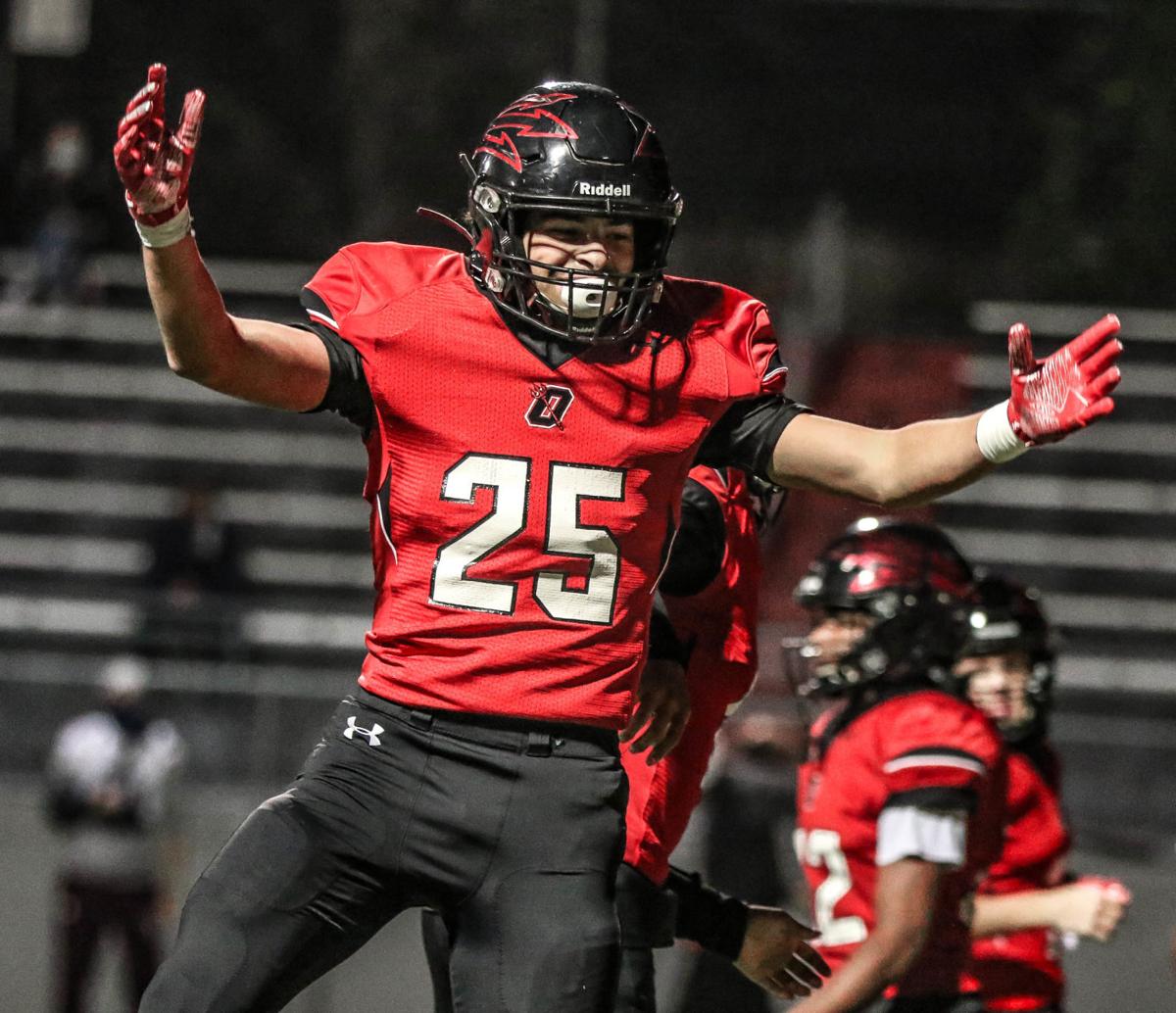 Owensboro’s Jeremiah Goodwin celebrates after an interception and a touchdown in the first quarter against Breckenridge County during the Class 5-A playoffs Friday at Rash Stadium.

Owensboro’s Khalil Rogers leaps for a pass from Gavin Wimsatt in the first quarter Friday against Breckenridge County during action in the Class 5-A playoffs at Rash Stadium.

Owensboro’s Jeremiah Goodwin celebrates after an interception and a touchdown in the first quarter against Breckenridge County during the Class 5-A playoffs Friday at Rash Stadium.

The Owensboro Red Devils picked up right where they left off.

Owensboro scored three defensive touchdowns and was ultra-efficient offensively, ultimately cruising to an 81-6 victory over Breckinridge County in the first round of the KHSAA Class 5-A playoffs Friday night at Rash Stadium.

It didn’t take long for Owensboro to get its postseason run going, following a three-week hiatus.

“The guys were excited,” OHS coach Jay Fallin said. “We’ve had a really good two weeks of practice. They’re excited about the opportunity to play. Our kids are really mature, and they’ve understood throughout the course of this year just how precious each opportunity is, because for any team — as we’ve seen with several teams just in the last few weeks — it could be over at any point.

“If our team has to quarantine, it’s over. They realize that, and they want to do the best they can every time out.”

The Red Devils forced a fumble on the opening kickoff, and two plays later Steven Stevenson scored on an 18-yard end-around run. After holding Breckinridge County (3-5) to a punt, OHS added to its lead on Ethan Avery’s 11-yard scoring scamper.

Another Breckinridge fumble on the ensuing kickoff set OHS up deep in Breckinridge County territory, but Gavin Wimsatt’s pass to the end zone on fourth down was intercepted — one of the Devils’ few missteps Friday night.

“We can always be better,” Fallin said. “We came out on that series and we took a shot at a screen that we felt would be there, and a lineman got a hand on it. All of a sudden, we were behind the chains. We need to score there. When the defense gives us the ball on the 20-yard-line, we need to score.”

After that, Fallin added, his team’s execution was crisp.

Jeremiah Goodwin intercepted a deflected pass and scored for the Red Devils, Wimsatt found Treyvon Tinsley for a short screen pass and a subsequent 69-yard touchdown after a Javius Taylor interception, Ben Flaherty scored on a 44-yard screen pass reception of his own, and Tramel Barksdale scooped up a fumble and returned it 15 yards for a TD.

By the time the dust settled at the end of the first quarter, OHS led 41-0 and had forced a KHSAA-mandated running clock.

In the second quarter, Flaherty reeled in a 30-yard touchdown down the sideline from Wimsatt, and Zach Clark returned an interception 30 yards for a TD to give OHS a 55-0 halftime advantage.

With substitutes playing the second half, the Red Devils tacked onto their lead with Kasey Boone’s 52-yard TD pass to Eli Early and, after another Clark interception, Kenyata Carbon’s 27-yard scoring run pushed OHS ahead 68-0.

Breckinridge County ended the shutout on a 5-yard scoring run by James Spitzer at the end of the third frame after a 51-yard double-reverse pass trick play sparked the Fighting Tigers’ drive.

The Red Devils’ Taquan Robinson broke loose for a 47-yard rushing score, Lucas Hartz recovered a fumble, and Carbon scored from 3 yards out with 4:05 remaining to provide the game’s final margin.

Breck finished the game with 137 yards of offense after being limited to just 25 yards at halftime, and OHS recorded eight total takeaways.

“This is something we try to emphasize to our guys all the time — winning the turnover battle’s the No. 1 way to increase your opportunity of winning,” Fallin said. “... I’m happy we were able to come out and execute that tonight.”

President Trump, social distancing and video calls! The TV Shows and films that ‘predicted’ the future...

As Taliban took over, she sent a message to her old teacher. See what happened next