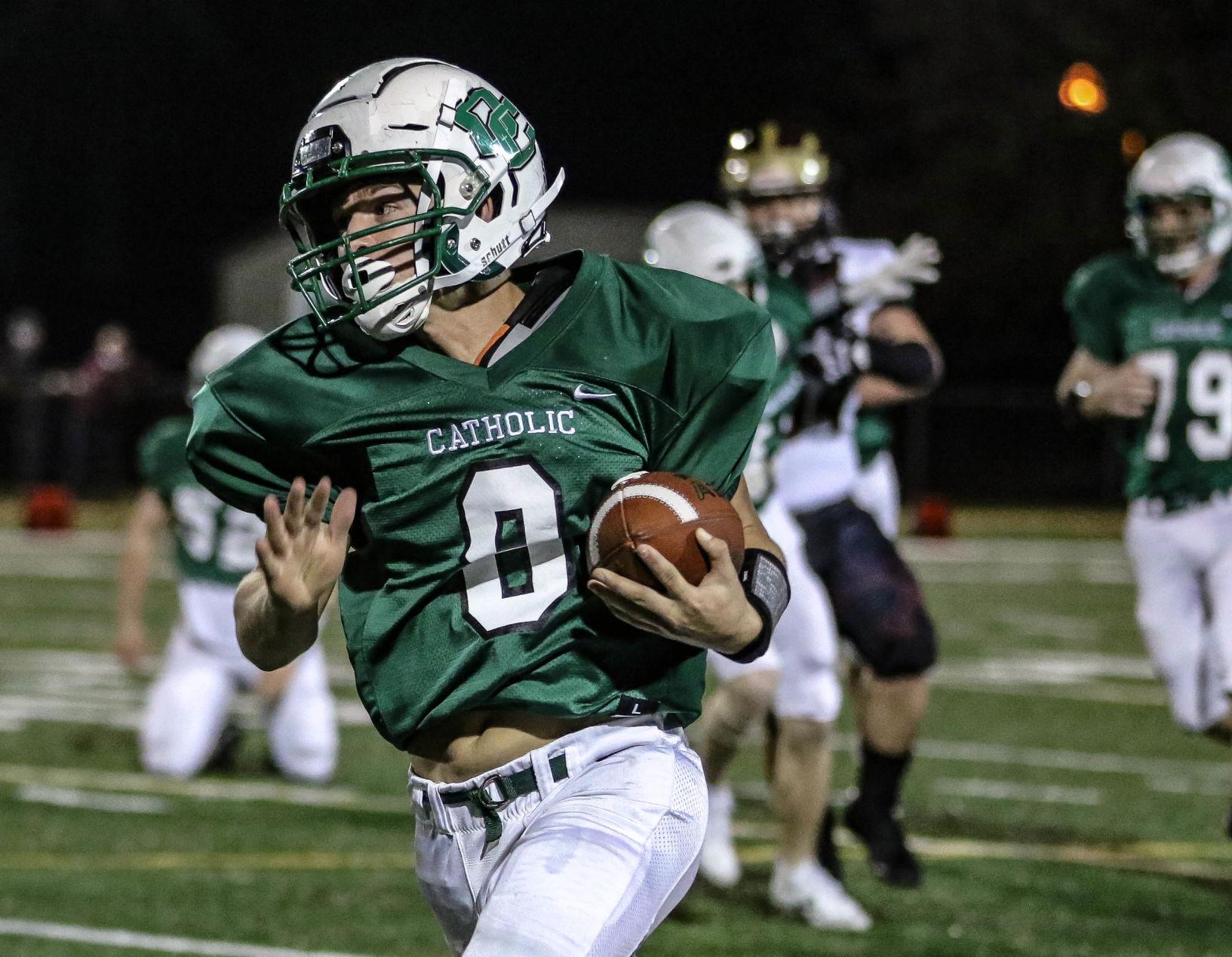 Owensboro Catholic’s Hunter Monroe runs for a touchdown Friday against McLean County During action in the Class 2-A playoffs at Steele Stadium. 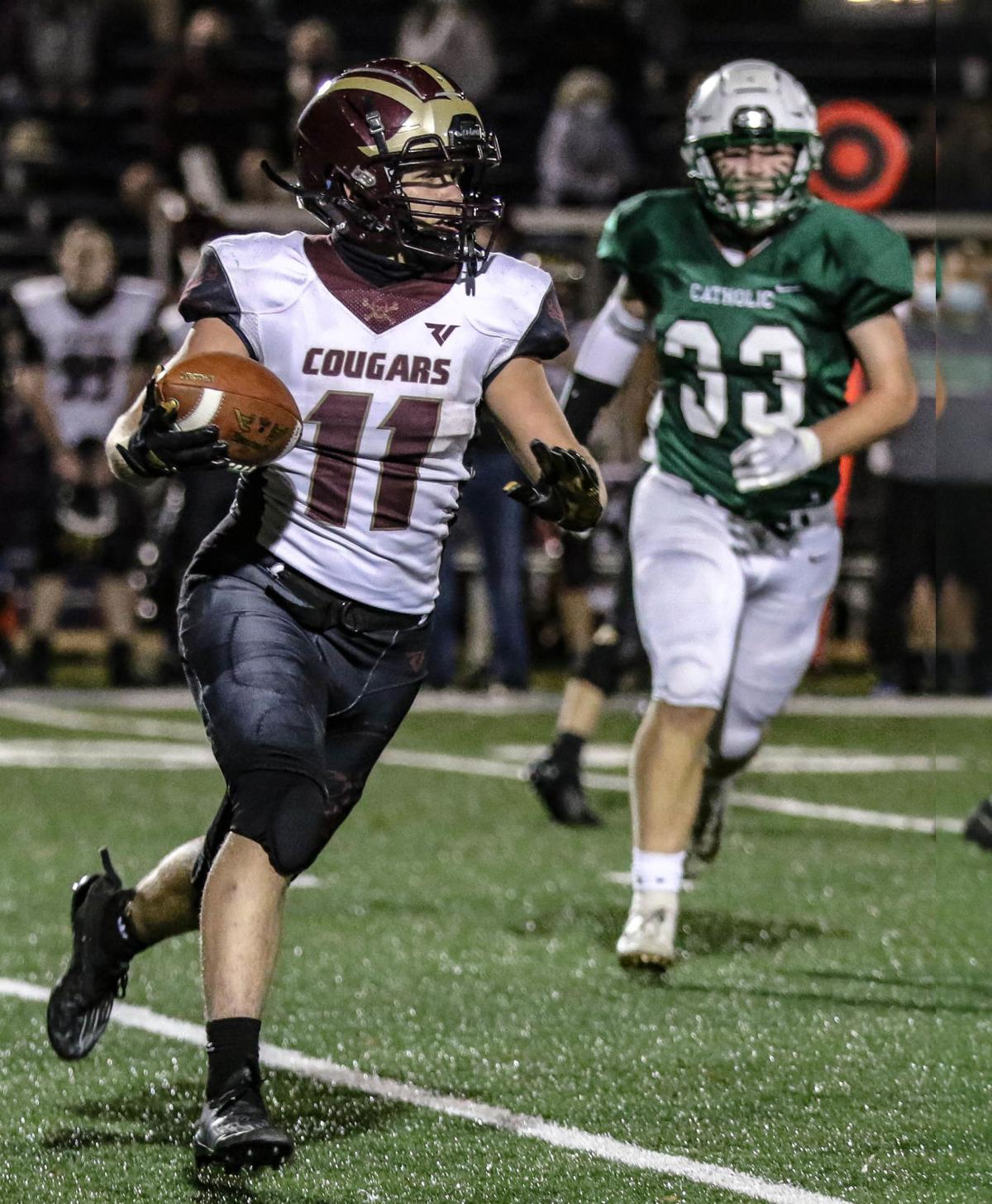 McLean County’s Zach Clayton runs for a gain against Owensboro Catholic During action in the Class 2-A playoffs Friday at Steele Stadium.

Owensboro Catholic’s Hunter Monroe runs for a touchdown Friday against McLean County During action in the Class 2-A playoffs at Steele Stadium.

McLean County’s Zach Clayton runs for a gain against Owensboro Catholic During action in the Class 2-A playoffs Friday at Steele Stadium.

Replacing fellow junior Lincoln Clancy as the Aces’ field general, Mundy was effective on the ground and through the air, as Catholic defeated visiting McLean County 40-22 in the opening round of the KHSAA Class 2-A football playoffs at Steele Stadium.

The Aces, upset 37-36 by the Cougars in last year’s second-round game, will face the winner of Saturday’s Todd County Central at Hancock County matchup next Friday.

“We have an exceptional athlete getting his hands on the ball every play,” OCHS head coach Jason Morris said of Mundy. “We want to run the football through the playoffs, and stop the run on defense.

“We’re focused on playing the game our way on every single snap.”

Catholic (6-3) meant business from the start, marching 62 yards on 13 plays and taking a 7-0 lead following a 7-yard touchdown run by Mundy at 5:31 of the first period.

Mundy struck again in the second period, scoring from 10 yards out to increase the Aces’ advantage to 14-0, and Catholic moved ahead by three touchdowns at the 5:14 mark when Max Byrne made a sensational on-his-back catch of a 32-yard pass from Mundy.

Moments later, however, McLean County (3-2) got on the board when Matthew Miller connected with Brady Dame for an 80-yard touchdown bomb, and a 2-point conversion run by Connor Baldwin pulled the Cougars within 20-8.

On the opening possession of the second half, McLean County drove from its own 25 to the Catholic 8-yard line before being turned away on fourth down.

The Aces made the most of the defensive stand by scoring just minutes later. Mundy connected with Finley Munsey for a 41-yard gain, and freshman Hunter Monroe then raced 55 yards for a TD to make it 27-0.

But the Cougars continued to fight.

Late in the third quarter, Miller hooked up with Dame for a 15-yard scoring pass and a subsequent 2-point conversion run pulled the Cougars within 27-16.

Catholic began to put the game away, however, on its ensuing possession, driving 61 yards in seven plays and stretching its lead to 33-16 on a 12-yard scoring blast by Chris Boarman at 9:32 of the fourth.

Later in the period, Monroe scored from five yards out to make it 40-16.

McLean County closed out the scoring at the 2:45 mark when Miller again passed to Dame — this time from 29 yards out — for the combo’s third touchdown of the game.

Drinkwitz: Missouri up to 59 scholarship players, no new COVID positives

Dalton, Cowboys hope to turn corner ahead of Thanksgiving showdown

“I’m very proud of the effort we gave here tonight,” Cougars head coach Zach Wagner. “We haven’t played a game in seven weeks (due to COVID-19-related cancellations) so I knew we would be a little rusty, a little out of shape, but the effort was definitely there.

“These seniors are a special group of guys and were part of our big run last season — they’ve been a fun group to coach.”

Catholic finished with 305 yards rushing and another 93 through the air for a total of 398 yards of total offense. Mundy was 4-of-4 through the air with a touchdown while rushing for 111 yards and two more scores. Monroe led all rushers with 140 yards and a pair of TDs.

McLean County amassed 379 yards of total offense, including 237 through the air, with Miller completing 8-of-16 passes and three TDs to Dame. Andrew Munster led the ground attack with 66 yards on 13 carries.

Watch now: Here's what Lubick, Chinander and Husker players are saying ahead of Iowa game

Pardon for Flynn under discussion at White House