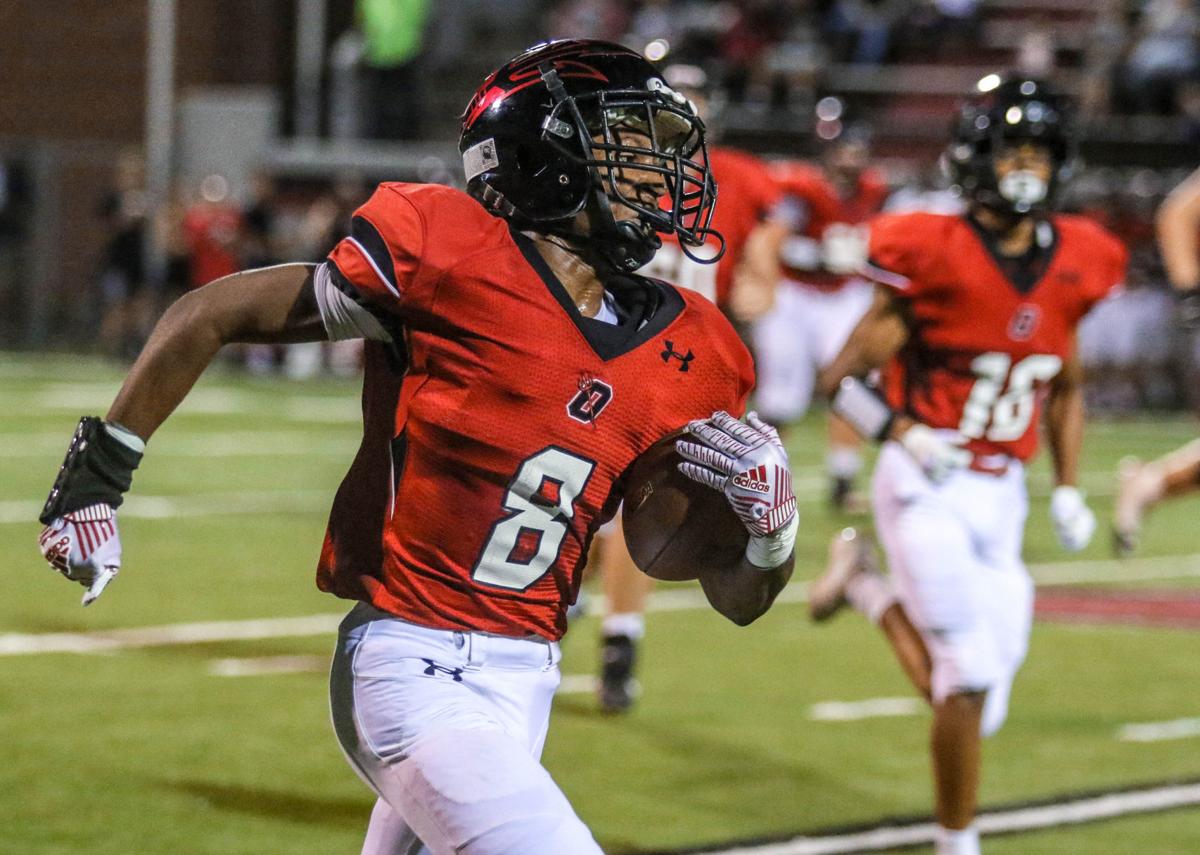 Owensboro’s Javius Taylor runs for a big gain during the second quarter against Muhlenberg County on Oct. 3 at Rash Stadium. 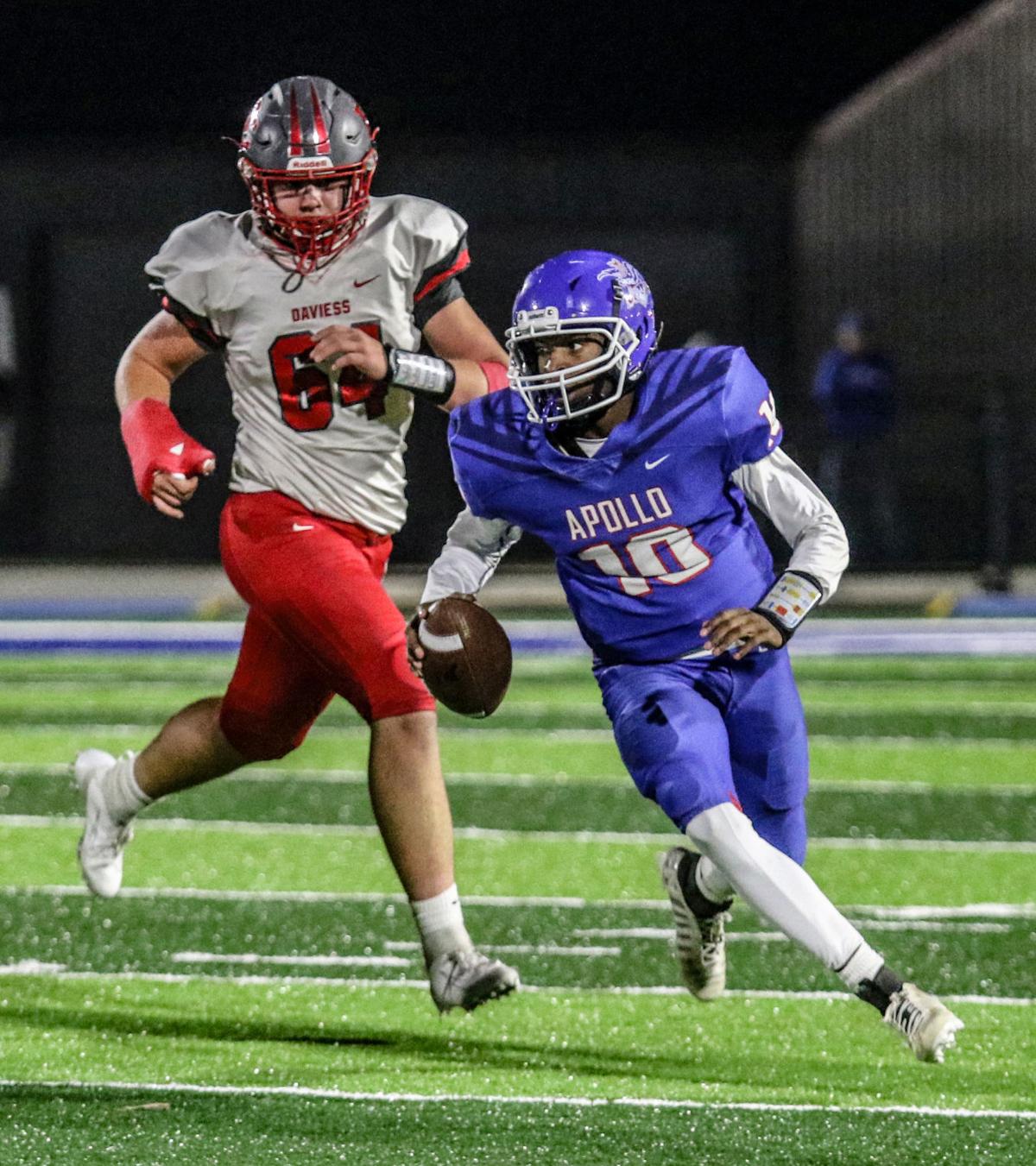 Apollo’s Damian Lovinsky (10) gets away from Daviess County’s Joseph Henry during action at Eagle Stadium on Oct. 25.

Owensboro’s Javius Taylor runs for a big gain during the second quarter against Muhlenberg County on Oct. 3 at Rash Stadium.

Apollo’s Damian Lovinsky (10) gets away from Daviess County’s Joseph Henry during action at Eagle Stadium on Oct. 25.

The most unusual opening night of any high school football season will feature a game at Rash Stadium that has plenty of interesting points to consider before kickoff.

The Owensboro Red Devils and Apollo Eagles will go at 7 p.m. Friday at Rash Stadium in front of a crowd limited to around 600 fans because of COVID-19 attendance restrictions implemented by the KHSAA.

Normally, an early-season City-County rivalry game would be played in front of a full house.

There will still be plenty of talent on both sides of the field.

OHS has one of the top junior quarterbacks in the nation in Gavin Wimsatt. And the Red Devils proved gritty and resilient in making a big run last season to the Class 5-A football playoffs semifinals.

“Compared to this time last year, there’s been a tremendous amount of growth from Gavin,” OHS coach Jay Fallin said. “He’s poised, confident and has a firm grasp on what we want to do. Gavin has made a great progression.”

The Red Devils should be highly-productive offensively with Wimsatt at the controls.

“We have a lot of veteran experience on offense,” Fallin said. “We’re all in situations we’ve never been in before, but we do feel very good with the experience we return on offense.”

Apollo will have a major challenge keeping a lid on Wimsatt, who became much more of a play-making passer as the 2019 season went along, hitting for 2,729 yards and 31 touchdowns through the air. Treyvon Tinsley has caught 21 touchdown passes in his Red Devil career.

“Quarterbacks, when they can keep drives alive with their legs, that changes a lot of things,” said Apollo coach John Edge, wary of Wimsatt’s scrambling ability.

The Devils have a defense with talent, but it needs experience. Austin Gough is the leader on that side of the ball.

Get to know the Wisconsin Badgers' 2021 football recruiting class

Apollo has a new look with Edge on the sideline. He makes his debut as the Apollo coach against OHS after many years as head coach at Owensboro Catholic.

“These City-County games are a big deal, there’s a sense of pride with them,” Edge said.

Apollo has a serious threat in running back Harold Patterson, who rushed for 2,142 yards and 23 touchdowns last season. Damian Lovinsky will be the senior quarterback running Apollo’s version of the spread.

Patterson figures to see plenty of running lanes, with the Eagles boasting a stout offensive line, led by the senior trio of Parker Bates, Logan Weedman and Cade Crume.

Execution may suffer early in this game on both sides because teams weren’t going through 7-on-7 summer workouts, nor did they have scrimmages.

“There was no litmus test,” Edge said. “This Friday is the litmus test.”

“Over the last three weeks our young men have been doing an outstanding job in preparation during what has been a unique situation,” Fallin said.

Both Fallin and Edge know keeping mistakes to a minimum will be the most sure path to a win.

“We have to eliminate mistakes, first-game mistakes and penalties,” Fallin said. “Last year we had a bunch of veterans on defense and youth on offense. This year we’re kind of opposite; we have talented players on defense that need experience. We’re growing new starters.”

Edge and the Apollo staff have stressed conditioning in the offseason.

“The team that makes the least amount of mistakes and is well-conditioned in the fourth quarter,” Edge said. “That’s what it boils down to.”