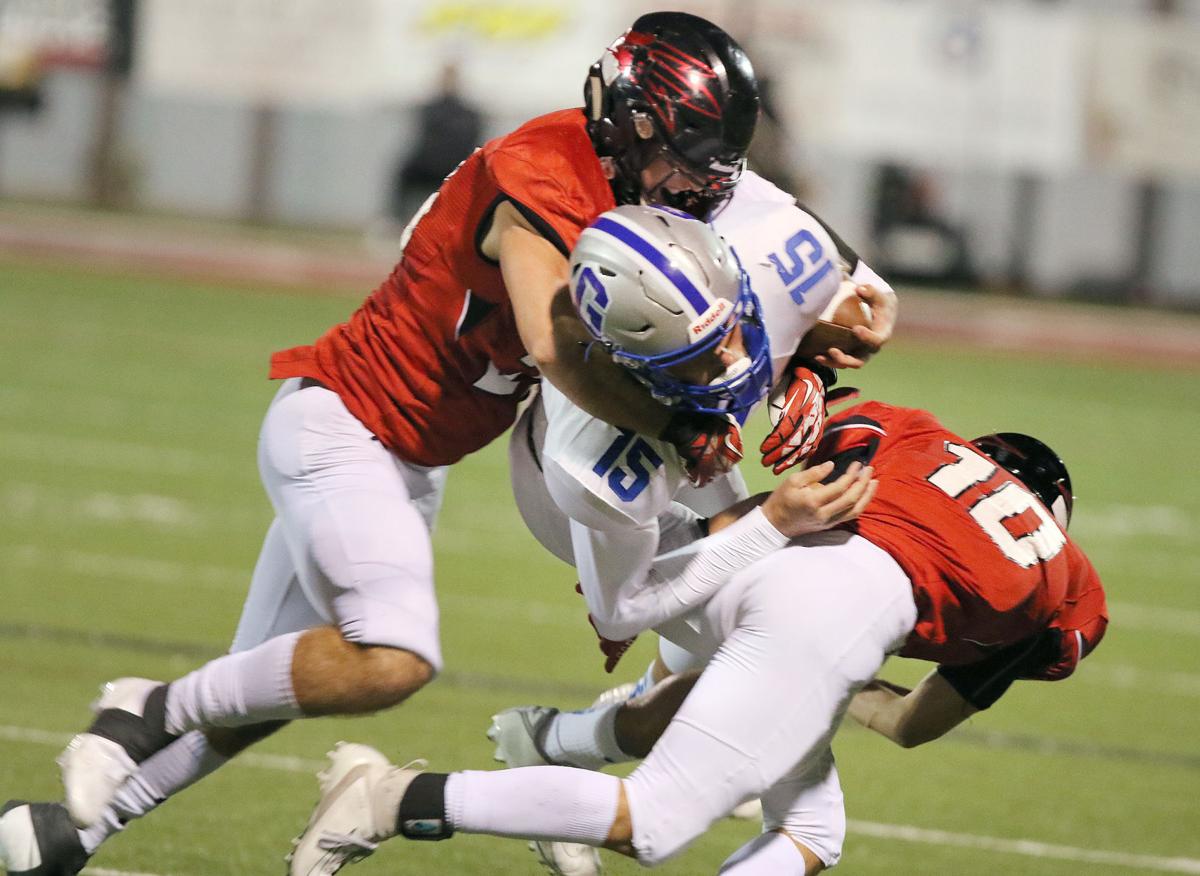 Graves County’s quarterback John Brown is stopped by Owensboro’s Austin Gough (26) and Ben Flaherty (10) during the game on Friday night at Rash Stadium. 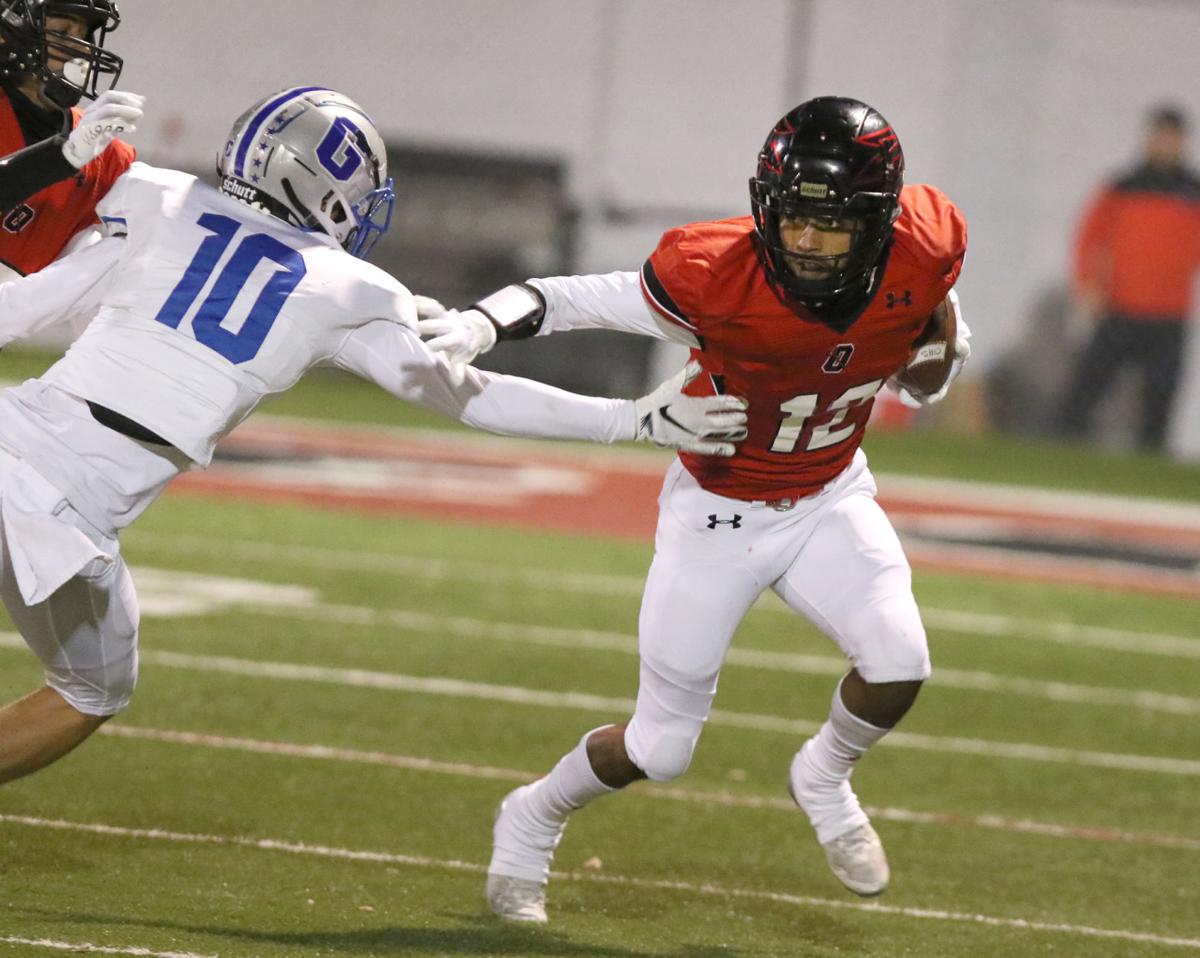 Owensboro’s Treyvon Tinsley tries to get away from Graves County’s Cadyen Goodman after a reception during the game on Friday night at Rash Stadium. 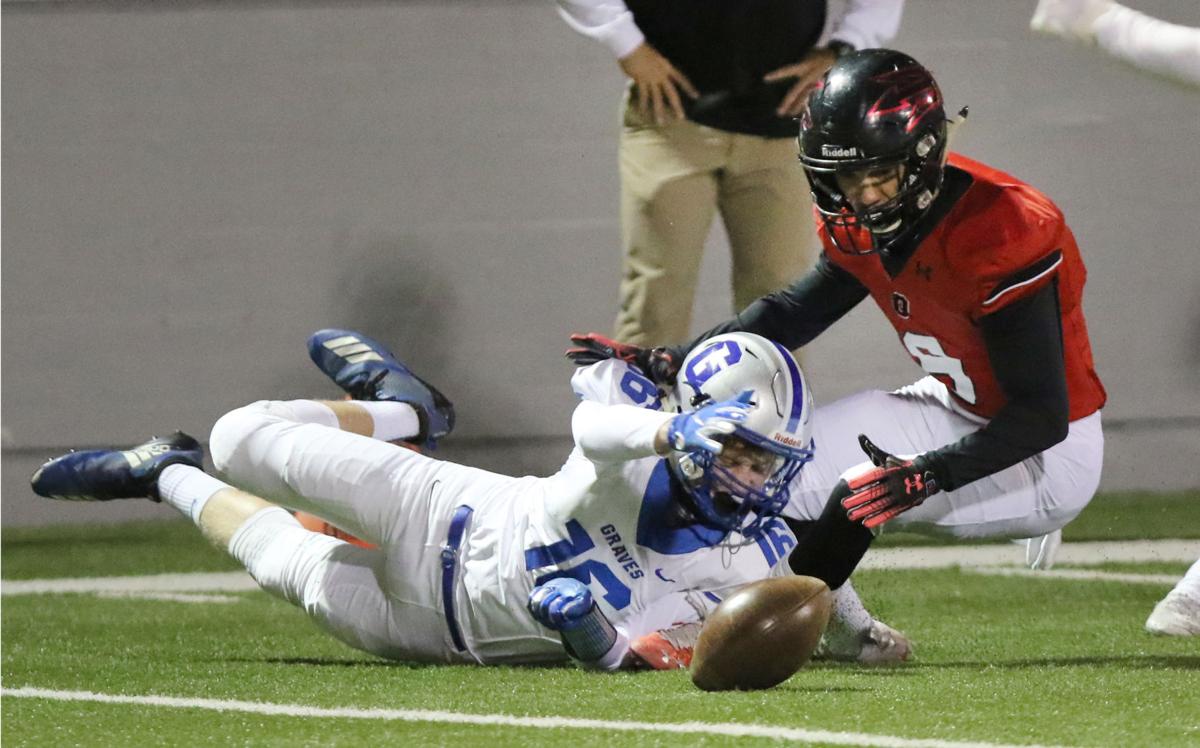 Owensboro’s Nicholas Avery gets ready to jump on a loose ball against Graves County’s Wesley Felts on the opening kick-off during the game on Friday night at Rash Stadium. 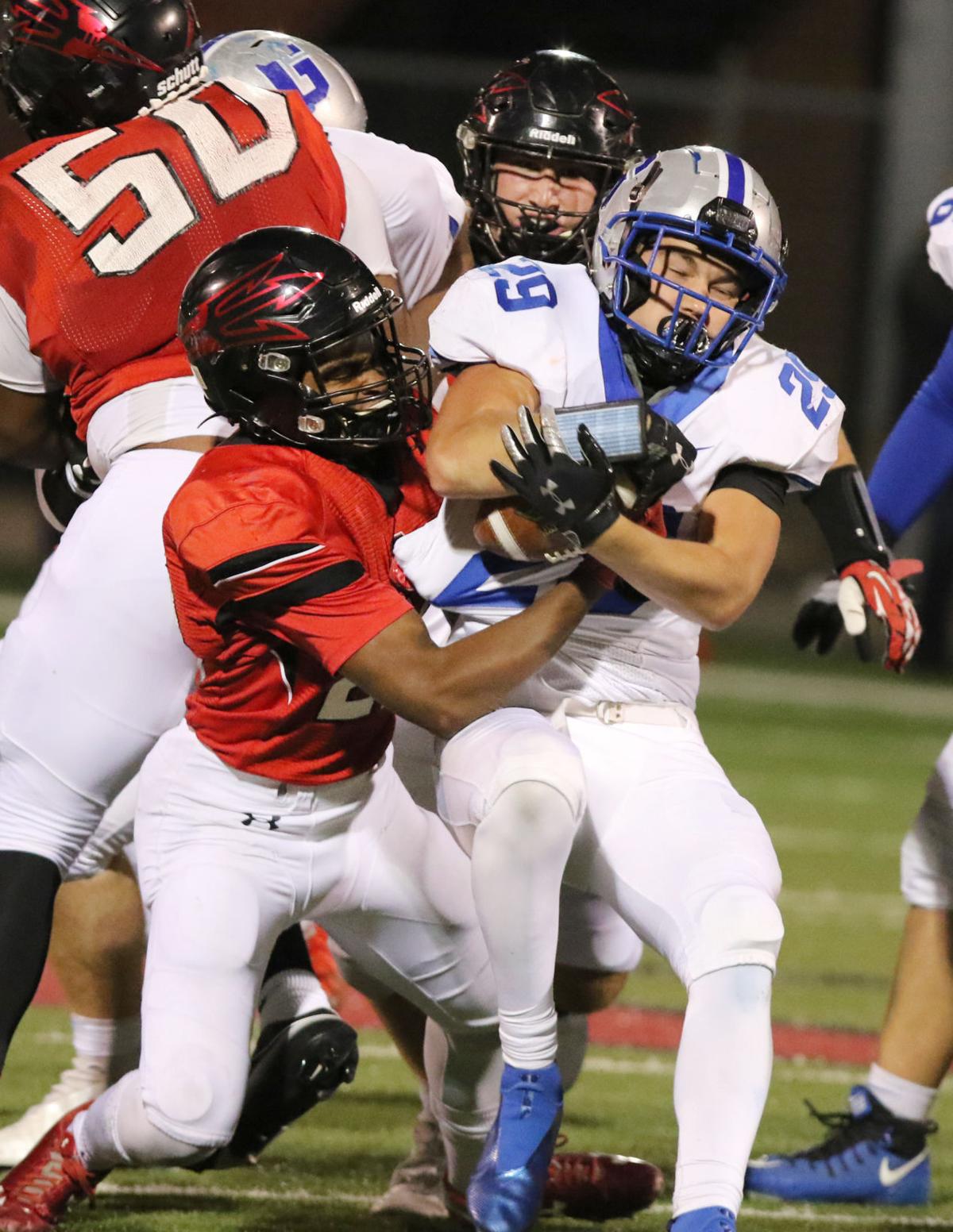 Graves County’s quarterback John Brown is stopped by Owensboro’s Austin Gough (26) and Ben Flaherty (10) during the game on Friday night at Rash Stadium.

Owensboro’s Treyvon Tinsley tries to get away from Graves County’s Cadyen Goodman after a reception during the game on Friday night at Rash Stadium.

Owensboro’s Nicholas Avery gets ready to jump on a loose ball against Graves County’s Wesley Felts on the opening kick-off during the game on Friday night at Rash Stadium.

Owensboro High School had Graves County chasing all over the field Friday night. The Eagles were always a couple of steps, and touchdowns, behind.

The Red Devils had a lot of variety in the way they put points on the scoreboard.

A recovered fumble on the opening kickoff to Graves County led to an Austin Gough 2-yard touchdown run for OHS before 54 seconds were gone in the game.

Trevon Tinsley got the perfect setup, and blocking wall, for an 80-yard jaunt down the OHS sideline for a 21-7 lead to open the third quarter.

“That’s been the challenge, getting somebody to kick it to us, and rightfully so. In watching film, we really worked on that particular return, they kicked it right where we wanted, to Trey in the middle of the field, and we set that return up perfectly. That set the tone for the second half.”

Ethan Avery took off for a 26-yard sprint where he slipped a tackle before the goal line to put OHS up 28-14 with 4:38 left in the third quarter.

Wimsatt had a 1-yard sneak for a 14-7 lead early in the second quarter.

Wimsatt hit 14-of-17 passes for 155 yards unofficially with a passing touchdown and two interceptions. Wimsatt also ran for 40 yards.

Flaherty capped the scoring with style when he picked up a Graves County fumble and took it 60 yards to the house for the final margin for the Red Devils.

“We take a lot of pride in special teams, and we had a defensive score,” Fallin said.

“If you’re one dimensional and you only have one star, that’s pretty easy to defend,” Fallin said. “But when you’ve got multiple guys all over the field you can’t key on one. Balance is the idea.”

Graves County got a 3-yard touchdown run from workhorse Clint McKee to tie things 7-7 with 3:48 left in the first quarter.

Brown found Kendall Lawrence for a 7-yard touchdown pass that made it 35-21 with 4:57 left.

“They’re good up front and McKee is good, he is really good,” Fallin said. “We’ll see him again next year. The quarterback has improved. They’re probably the best offensive team we’ve seen this year on the whole. I think our defense did a good job of growing up.”

OHS did a good job of locking up defensively when it had to get stops. OHS got two stops on fourth down in the game, including at its own 36 in the second quarter.

“The stats may not show it, but we got some crucial stops that we had to get, much better than we did in weeks one and two, especially the big fourth down stop, when we stuffed them at midfield,” Fallin said. “Our defense grew up a lot, especially for being put in some bad spots by the offense.”

Contrast Biden and Trump on climate policy in 90 secs

Biden wants to expand Obamacare, Trump wants to replace it