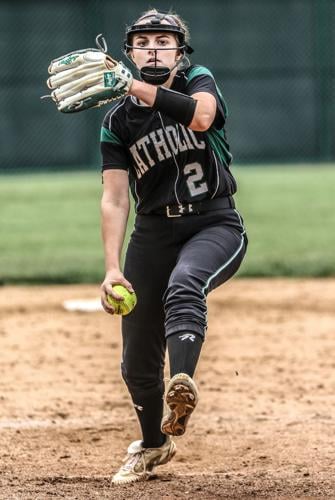 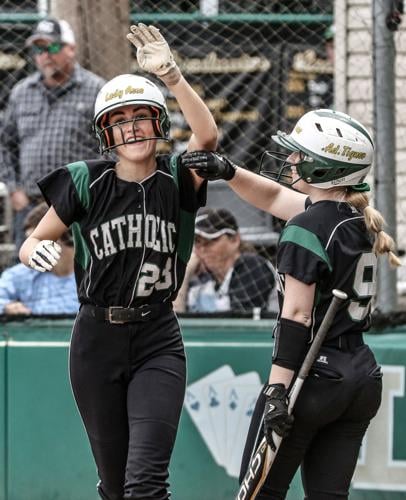 Owensboro Catholic and Hancock County got showcase pitching performances on the way to victories in the opening round of the 3rd Region Softball Tournament at Catholic’s Parents Park.

Brooke Hamilton struck out 13 and was big offensively in leading Catholic to a 5-1 win over Muhlenberg County in the opening game of the tournament Saturday.

Lily Roberts was also dealing in the circle for Hancock County. The sophomore struck out 10 Whitesville Trinity batters as the Lady Hornets held on for a 2-0 win.

Catholic and Hancock County will meet in the regional semifinals Sunday at 5 p.m.

Brooke Hamilton was throwing strikes for Owensboro Catholic in the opening round of the 3rd Region Softball Tournament.

Hamilton also made a power difference at the plate when she had the opportunity, smacking a two-run homer in the top of the fifth inning to break the game open and push Catholic to a win over Muhlenberg County.

The Lady Aces plated three runs in that inning, with Bailey Hamilton getting a double to score Addison Tignor, who reached on a single.

Catholic will take a 23-14 record into Sunday’s regional semifinals.

“When you get the pitching going, couple of timely hits here and there, after that first time through the lineup we made a couple of adjustments and got better,” Catholic coach Jeremy Phelps said. “When you’ve got somebody pitching to keep you in the game, that’s the biggest difference, it makes my job a lot easier, I get a front row seat. We talked about it the first couple of times — we need to get that key hit, then a two-out home run. She does it all.

“When it’s a survive-and-advance type of game, there’s tension. (At) 1-0, the tension was still there, get a couple of runs, it makes her job easier and makes the defense better.”

Brooke Hamilton kept Muhlenberg County off balance most of the game.

“I pitched live at practice Tuesday and got everything going,” Brooke said, adding that her location was good. “Yes, and when I can put spin on it and get them swinging at the high ball, it’s good. I’m more of a contact pitcher — not strike them all out — let my defense back me up. I was working inside-outside, the rise ball.”

Catholic got on the board in the top of the first when Camille Conkright reached on an error and scored on a second error.

The Lady Aces left two runners in scoring position in the third inning, but got a second run across in the bottom of the fourth. Abbie Dukate got a two-out double and scored on Lilli Grant’s double.

Then came the big blast in the fifth inning.

“There’s a couple when you know off the bat. That one, I had to watch for a minute,” Brooke said.

Catholic collected 12 hits with six that were doubles.

Muhlenberg County finished the season 10-17. Josie Davis hit a home run in the bottom of the sixth inning and she also took the pitching loss. Davis hit .431 on the season. Joshlynn Noe was the team’s leading hitter at .431 and Macy Cotton hit .417.

Roberts keeping Trinity under control at the plate was key in the Lady Hornets moving on to the regional semifinals.

“I think my curveball was working the best and playing error-free defense gives me a lot of confidence so I can relax and just pitch,” Roberts said. “We’ve been playing really good defense lately. If we get a couple of runs, it helps out.”

Hancock County left two runners on in the first inning but broke through in the second with a home run by Emmalynn Higdon that scored Halle Coomes, who walked.

“Sometimes that first game in the tournament is the toughest one, and we made it tough,” Hancock County coach Dwayne Wroe said. “Got to give credit to Whitesville, the last two times we’ve played them this year they’ve battled us. We were not being patient at the plate, they did a good job doing that to us. Emmalynn Higdon got a big two-run shot, she did the same thing last year against them in the regional, I think it was a scoreless game.

“Thank goodness for Lily. With her in the circle, we feel like we’re in every game.

“Our offense kind of relaxes when they know she’s out there. But my part, I’ve aged from 60 to 75 years old these last two weeks.”

The Lady Hornets were stopped a couple of times by fine defensive plays by Trinity, which turned a rare triple play that was unorthodox but got the job done to prevent a big inning.

“We ran ourselves out of the inning. Two on, nobody out, and they had the triple play,” Wroe said. “That’s something we’re not going to be able to do against Owensboro Catholic. We know what we’re facing there, 3-2 ballgame last time we faced them, I expect nothing different from what this ballgame was like, a close game. I expect another nail-biter.”

“I need to pitch well, no errors and we need to hit the ball,” Roberts said.

Trinity’s Allie Graham had a big effort, allowing just four Hancock hits. Trinity got two runners on in the top of the seventh after singles by Madison McDaniel and Cassidy Morris with no outs. Trinity couldn’t get a run across, and the game ended with three straight outs.

Trinity finished 18-12. Trinity coach Jack Melton coach told his team that along with the seniors, Saturday was his last game at Trinity. Melton had coached at Trinity since 2017.

“We tried, we were ready to play, we worked hard all week to get ready for Lily, we couldn’t get the ball in play,” Melton said. “She has a nasty (curveball) that breaks on the outside of the plate, it’s hard to replicate, it’s got some movement.

“Allie pitched a really good game, and after getting hit too, she hung in there and did a great job.”