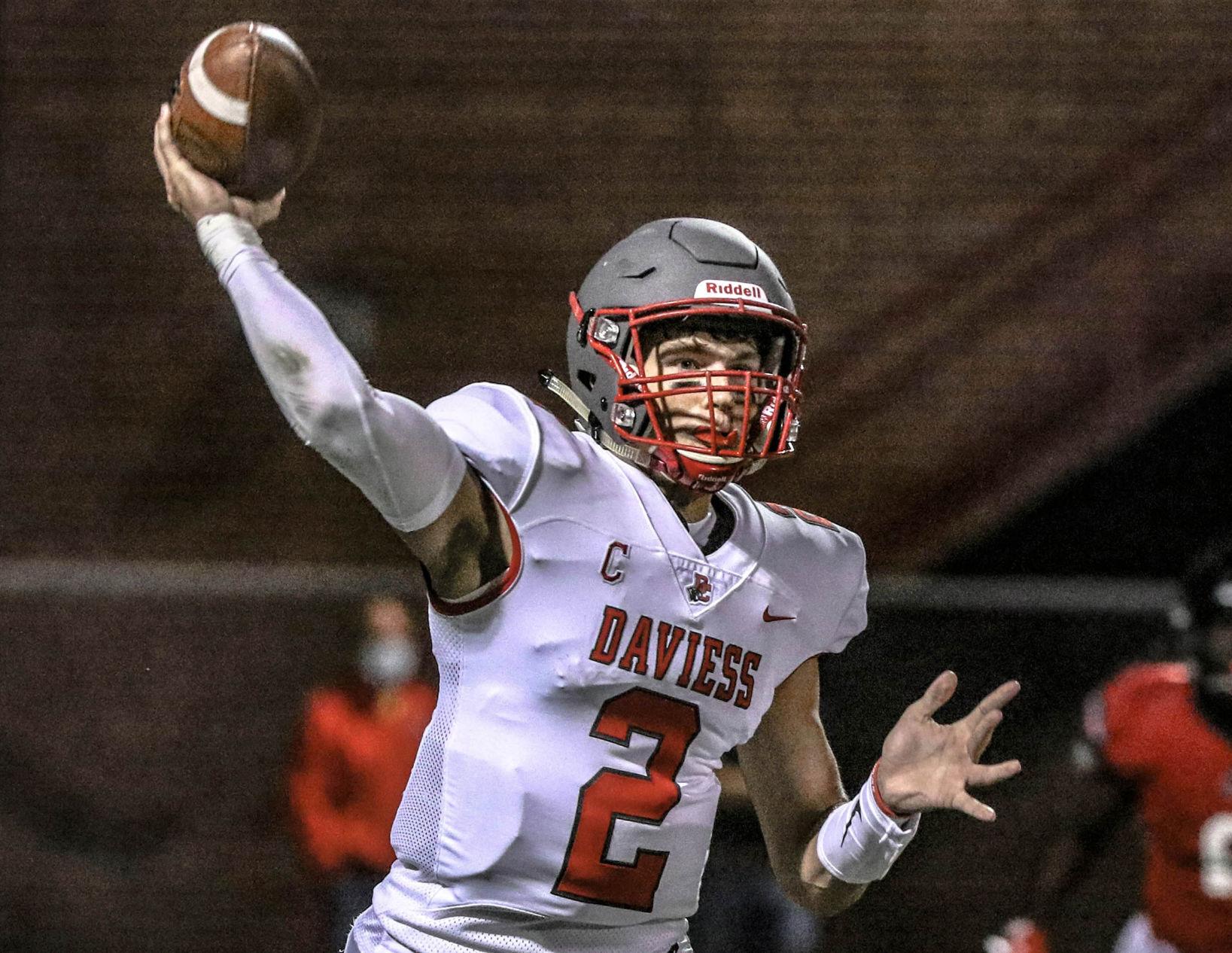 Daviess County’s Joe Humphreys passes in the first quarter against Owensboro during action on Friday at Rash Stadium. 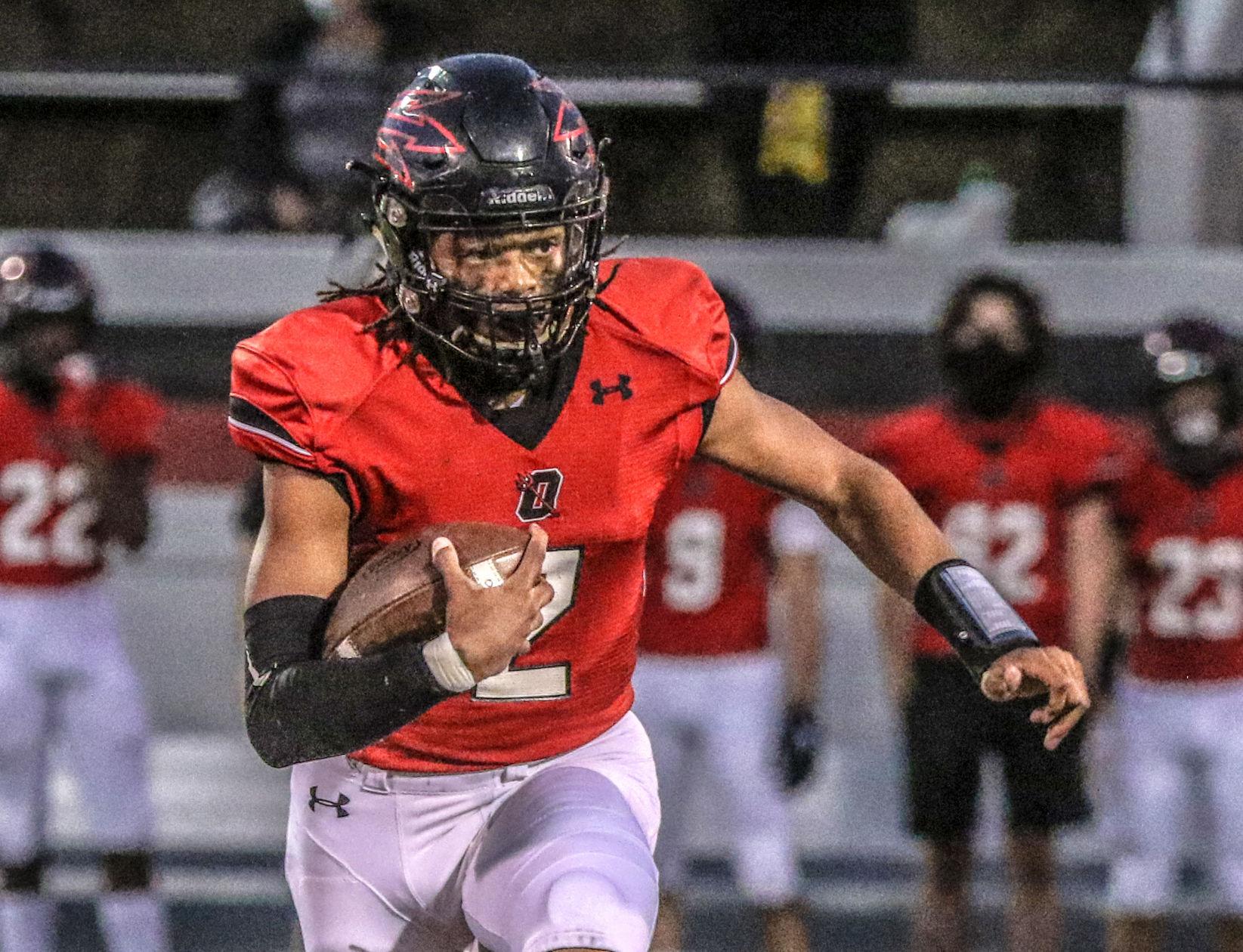 Owensboro quarterback Gavin Wimsatt runs for a gain in the second quarter against Daviess County on Friday during a game at Rash Stadium.

Daviess County’s Joe Humphreys passes in the first quarter against Owensboro during action on Friday at Rash Stadium.

Owensboro quarterback Gavin Wimsatt runs for a gain in the second quarter against Daviess County on Friday during a game at Rash Stadium.

The numbers took a little while to completely jump out at you late Friday night.

Joe Humphreys passed for 270 yards and four touchdowns. Humphreys ran for 93 more and another touchdown. That was 363 total yards for Humphreys.

Wimsatt’s numbers were enough to help push the Red Devils to a 42-34 win.

Humphreys numbers were slightly higher, and those helped push the Panthers to the edge of what would’ve been a monumental victory.

Those with a special interest in high school football figured Wimsatt would have a big game in his second junior start at quarterback for OHS.

Wimsatt would do that after opening with what might be called a “standard game” against Apollo to start the season. Wimsatt is regarded as one of the best high school junior quarterbacks in the country — people are going to watch him this season expecting to see a show.

Wimsatt hit 15-of-29 passes for 218 yards, two touchdowns and two interceptions against DC. The dual-threat also had 14 carries for 111 yards and two touchdowns, including an electrifying 49-yard touchdown sprint down the sideline.

Not a lot of folks outside of the Daviess County football program knew exactly what to look for with Humphreys. He missed the season opener while in COVID-19 protocol.

Humphreys first game would not be a standard assignment, going against the Red Devils.

Humphreys is a junior at Daviess County. Humphreys made up for that missed time on what would have been a grand performance stage if not for attendance restrictions at Rash Stadium.

Humphreys was 20-of-36 passing for 270 yards and four touchdowns, including a 66-yarder to Carter Hamilton that tied the game 21-all in the third quarter.

Humphreys also ran 14 times for 93 yards and another touchdown.

Perceptions were put to the test in a game like this. A more seasoned quarterback in terms of how many bigger games he’s played, Wimsatt would be held to a higher standard.

The OHS turnovers, including two interceptions that set up DC touchdowns that put them ahead, would get a closer look under the microscope.

Humphreys had his mistakes also, including an interception late that OHS turned into an insurance touchdown with two minutes to play. This was Humphreys’ true first game. That was a minus in getting a game in. It was a plus in not giving OHS a look at Humphreys in the preparation for last week’s game.

Both Jay Fallin for Owensboro and Matt Brannon for Daviess County said as much when they looked at things shortly after the game ended Friday night.

What stood out to many of those leaving Rash Stadium was they thought they’d get a show from Wimsatt at OHS, but they ended up seeing two with the help of Humphreys from Daviess County.

Watch now: Mills of being in Lincoln, "I love being here... being here makes me happy"

Watch now: Dawson says his OLB group doesn't 'have time to be young'

Watch now: Mills of being in Lincoln, "I love being here... being here makes me happy"