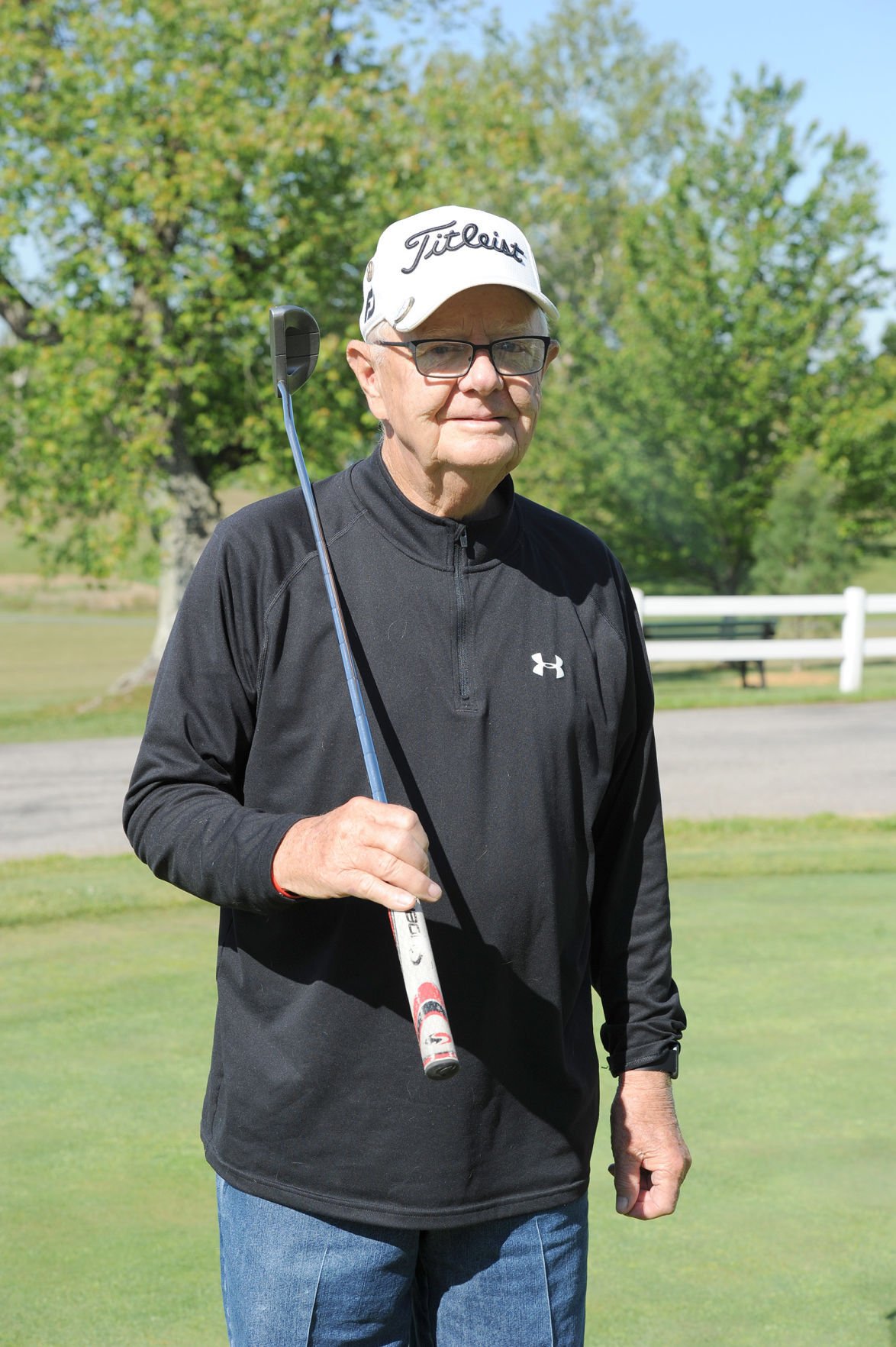 WH Rightmyer is pictured on Friday at Hillcrest Golf Course. 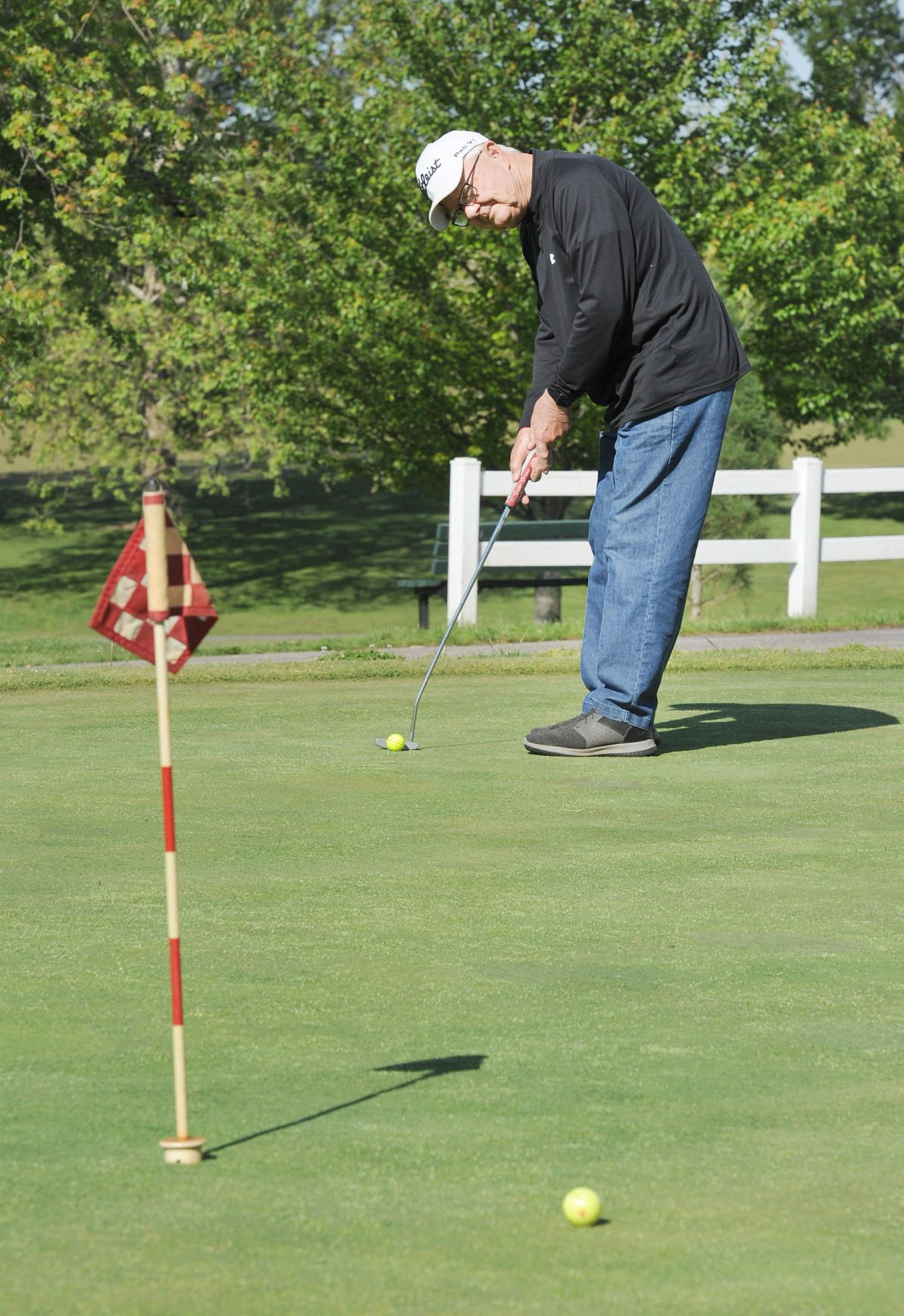 WH Rightmyer works on his putting as he practices on Friday morning at Hillcrest Golf Course.

WH Rightmyer is pictured on Friday at Hillcrest Golf Course.

WH Rightmyer works on his putting as he practices on Friday morning at Hillcrest Golf Course.

WH Rightmyer still plays plenty of golf, which shouldn’t be a surprise to those who remember his place in the sport in Owensboro-Daviess County.

“I play two or three times a week, if it’s a good course, we’ve got a group that plays in the Monday pro-ams in the tri-state area,” Rightmyer said. “On Wednesday and Thursday, I play in the scrambles, and that’s about it.”

He has volunteered at the Pearl Club for more than 20 years and plays that course when he can. He has also worked with juniors at Persimmon Ridge Golf Club during past summers.

“It’s one of those sports you can carry on through life if you want to, if your health holds up,” Rightmyer said.

A knee problem was keeping the 78-year-old from playing last week. Otherwise, he would’ve been in scrambles at either Ben Hawes Golf Course or Hillcrest.

He can still score well, too. Rightmyer shot a 66 one week and a 67 the next week at Panther Creek.

“It’s a short course, and if I’m on a short course I can play pretty good,” Rightmyer said. “I was in a pro-am at Boonville and shot 76.”

Rightmyer was considered one of the best amateur golfers in the area for a number of years, beginning in the 1980s and 90s. He won the Men’s City Golf Tournament twice in the mid-1980s and even won it again in 1997.

He also finished second a couple of times.

The ‘97 win was special for Rightmyer, because his daughter, Jenny, also won the Women’s City Tournament that same summer.

“She won the City and I won the City at the same time, that’s never been done before,” Rightmyer said. “I’ll never forget that — that was a highlight of my life.”

WH, Jenny and mom Rebecca traveled all over Kentucky to junior tournaments and for high school play when WH was the coach at Daviess County High School, where he was also a teacher.

“She made all-state, and our DC team was third in the state a couple of times,” WH said. “I had two all-staters, One was Manda Clements and Jenny, I’ve had some good players.”

WH coached a lot of different sports at Daviess County Middle School, then he settled in as girls’ golf coach for a number of years until he retired in 1999.

He was a walk-on golfer at Western Kentucky University. WH started playing the game when he was 18, and area farmer Bill Kuegel was a member at Windridge Country Club and would take him along.

“He got me started playing golf, he took me out at Windridge,” Rightmyer said of Kuegel. “From there on, I played a lot.”

WH started learning about the game when he played at WKU. He started practicing and playing more during the summers when he was teaching.

One of those golfers was a guy by the name of Kenny Perry, who was about to turn pro. They were playing in the Greenville Invitational in Muhlenberg County.

“I played with Kenny Perry in the Greenville Invitational the year he turned pro, and believe it or not, I beat him,” Rightmyer said. “We were paired the last day together, we went to the last hole tied. It was a par 3. It was about 160 yards, Kenny took an 8-iron and flew the green, landed on the side of a hill. He chipped up and made a par, he got up and down.

“I hit a 5-iron three feet from the hole and made the birdie putt and beat him. That was in the early 1980s, right before that fall he turned pro. He got up to number six in the world at one time. I went down and played in his scramble about three or four times.”

Rightmyer has enjoyed his lifetime of golf and the fact he can still go out and play.

“Sometimes I get out a scrapbook my granddaughter made and read through it, and the good Lord blessed us is all I can say,” Rightmyer said. “I really wasn’t taught to play golf the right way, I was kind of a self-made deal, I had some good instructors.

“I practiced a whole lot. If I wasn’t playing, I was practicing. If I got in trouble (on the course), I learned how to correct myself. A lot of people don’t have that, they’ve never taken any lessons, they just go out and play.

“I still like to go out and compete with the old guys that I’ve played with for a long time. We reminisce and talk about things.

“I’ve got a lot of good memories. Golf has been good to me.”

Photos: Recruits get a taste of Husker football at Friday Night Lights