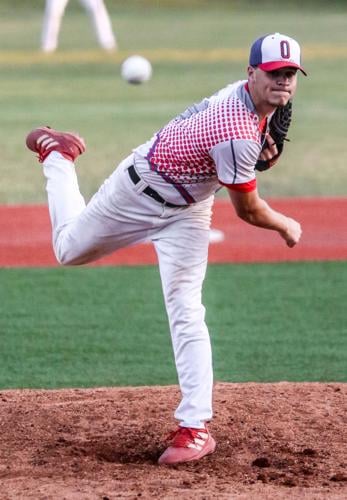 Owensboro RiverDawgs’ pitcher Ethan Gibson tosses in the second inning on Wednesday against the Hoptown Hoppers at Chautauqua Park. 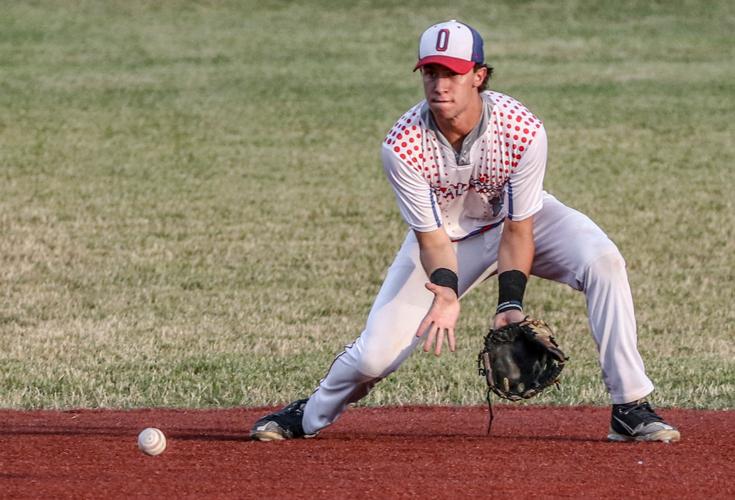 Owensboro RiverDawgs’ Ethan Plyler gets in front of a line drive from the Hoptown Hoppers during action in the first inning on Wednesday at Chautauqua Park.

Owensboro RiverDawgs’ pitcher Ethan Gibson tosses in the second inning on Wednesday against the Hoptown Hoppers at Chautauqua Park.

Owensboro RiverDawgs’ Ethan Plyler gets in front of a line drive from the Hoptown Hoppers during action in the first inning on Wednesday at Chautauqua Park.

It took a little under four hours and 30 runs to decide it, but the Owensboro RiverDawgs outlasted the Hoptown Hoppers 16-14 Wednesday night in Ohio Valley League action at Chautauqua Park.

The RiverDawgs came back from deficits a couple of times in the game. They trailed 14-8 and 14-12 before coming back with four runs in the bottom of the eighth inning to get ahead to stay.

Daleen Adderly’s single scored two runs in the bottom of the eighth, EJ Clark had another run scoring single to push the RiverDawgs ahead 15-14, and Jake Allgeyer’s single scored the final run.

The RiverDawgs got back in the game with four runs in the bottom of the sixth inning to trim the Hoptown lead to 14-12.

The game started at 7:15 p.m. because of extreme heat during the in the area.

The RiverDawgs went to 6-12 with the win.

“That’s this team, we just kind of battle,” RiverDawgs manager Vic Evans said. “I’ve got to give a lot of credit to Daylin Crabtree, Braden Mundy, Derek McCarley, our last three relievers at the end. We told them if we can put up a couple of zeros and give our offense a chance, and they did that. It was just one of those where we didn’t quit.

Luke Genier’s pitching woes didn’t matter when Hoptown got to the top of the second.

Hoptown started scratching back with a sacrifice fly, then a 2-run home run by Sean Sullivan put his team up 3-2. Ethan Gibson was the RiverDawgs starter.

He gave way to Preston Franey, who gave up two straight doubles which pushed Hoptown in front 5-2. The last run of the inning scored on another single. Ren Tachioka doubled after Gavin Baxter doubled.

Genier continued to struggle in the bottom of the second inning when he walked three straight RiverDawg batters before Cody Hupp took over on the pitcher’s mound.

Hupp gave up a single to EJ Clark, then Ethan Plyler scored on a wild pitch to cut the Owensboro deficit to 6-4.

Hoptown went back up 10-6 in the top of the third with a 3-run home run by Joshua Rodriguez.

Adderly had an RBI single in the bottom of the third to make it 10-7.

Adderly had another RBI single in the bottom of the fifth to make it 13-8. Hoptown added another run in the top of the sixth for a 14-8 advantage.