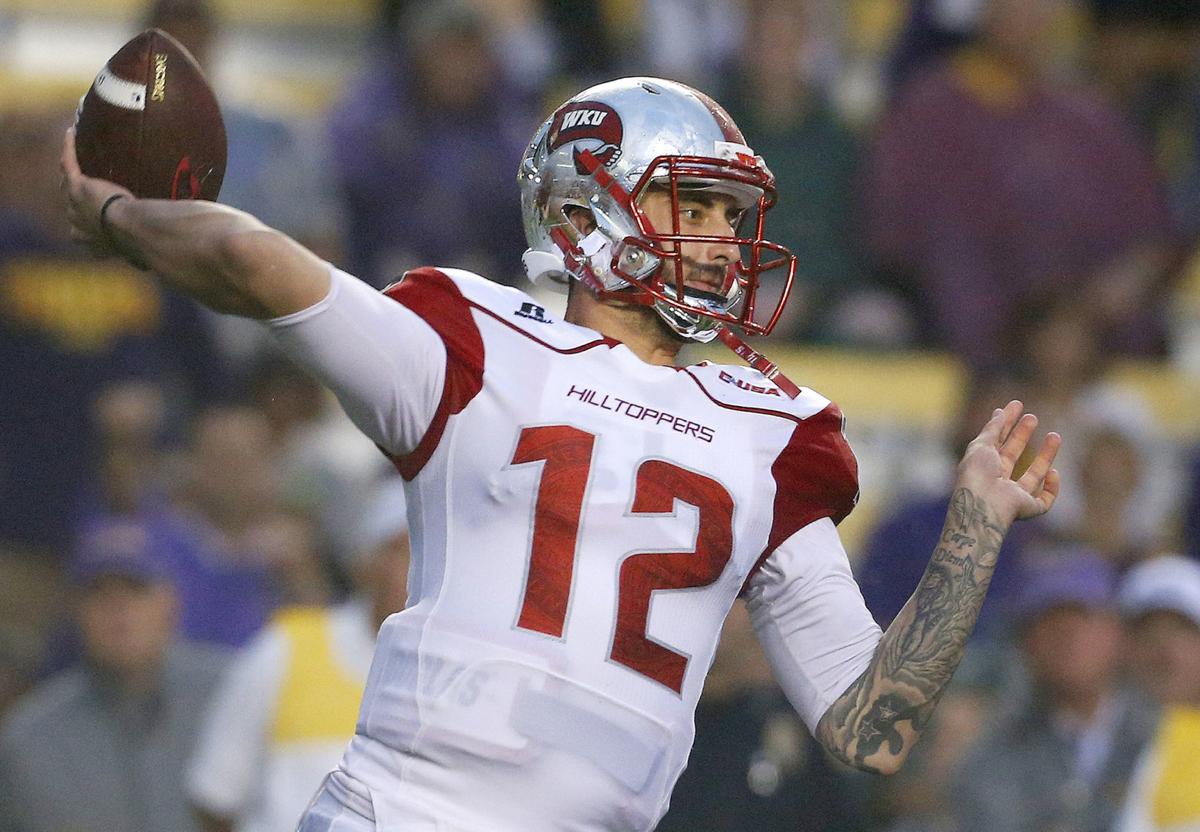 Western Kentucky quarterback Brandon Doughty (12) throws the ball in 2015 during the first half an NCAA game against LSU in Baton Rouge, La. 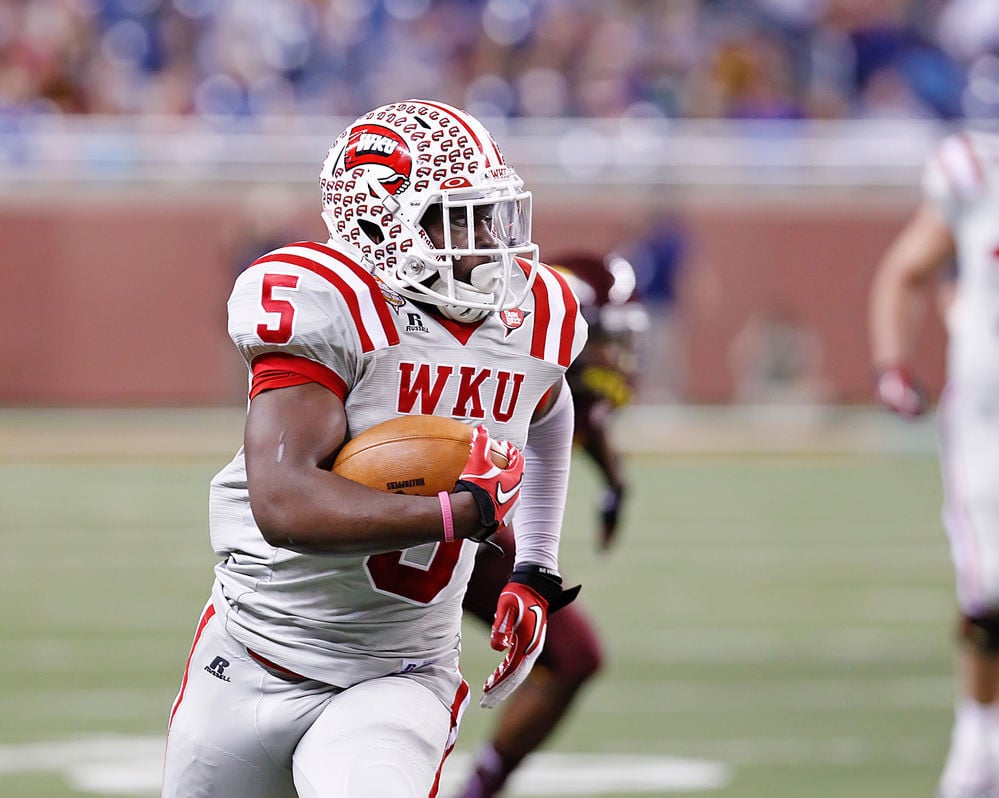 Western Kentucky running back Antonio Andrews heads upfield in the Hilltoppers’ 24-21 loss to Central Michigan in the 2012 Little Caeasars Pizza Bowl at Ford Field in Detroit.

Western Kentucky quarterback Brandon Doughty (12) throws the ball in 2015 during the first half an NCAA game against LSU in Baton Rouge, La.

Western Kentucky running back Antonio Andrews heads upfield in the Hilltoppers’ 24-21 loss to Central Michigan in the 2012 Little Caeasars Pizza Bowl at Ford Field in Detroit.

In the wake of a painful 26-game losing streak, Western Kentucky’s football program transformed from FCS to FBS at warp speed in the 2010s decade.

Not coincidentally, so did the Hilltoppers’ talent level.

Narrowing WKU’s best players in the decade to 10 was a difficult task, and the list doesn’t even include George Fant.

A star basketball player who played only one season of football at Western, Fant was as a seldom-used tight end. He transformed himself into a premier NFL offensive lineman and recently signed a three-year, $30 million contract with the New York Jets.

Here’s WKU’s best of the decade:

Doughty was Conference USA Most Valuable Player in botg 2014 and 2015, leading the Hilltoppers to two bowl victories and a conference championship (2015).

He also threw eight TD passes and a game-winning 2-point conversion pass in the program’s most seminal victory of the decade — a 67-66 overtime conquest of undefeated and No. 19 Marshall in Huntington, West Virginia, to close out the 2014 regular season.

He was a third-team All-American as a senior in 2015, and a year earlier won the Sammy Baugh Trophy, signifying the nation’s top collegiate passes.

Doughty was selected in the seventh round of the 2016 NFL Draft by the Miami Dolphins.

2-TAYWAN TAYLORA football and basketball star out of Louisville’s Pleasure Ridge Park High School, Taylor became a phenomenon as the primary target for quarterbacks Doughty and Mike White at WKU.

In a brilliant four-year career on the Hill, Taylor finished with a program-record 253 receptions for 4,234 yards and 41 touchdowns.

A two-time All-C-USA first team selection, Taylor was a Biletnikoff Award semifinalist in each of his final two seasons as a collegian.

Taylor was selected in the third round of the 2017 NFL Draft by the Tennessee Titans. After two seasons in Tennessee he was traded to the Cleveland Browns.

3-ANTONIO ANDREWSA star quarterback at Fort Campbell High School, Andrews was converted to running back and became one of the greateat all-purpose players in college football history.

As a senior in 2013, Andrews rushed for 1,730 yards and completed a trick-play 2-point conversion pass to Kawaun Jakes, completing the Hilltoppers’ 32-31 victory over Kentucky in Lexington.

Sports Illustrated selected him as a first-team All-American in 2013.

He was a second-team Sports Illustrated and third-team Associated Press and Yahoo!/Rivals All-American selection in 2011.

Rainey signed with the Baltimore Ravens in 2012 as an undrafted free agent and spent six productive seasons in the NFL, including stops with the Cleveland Browns, Tampa Bay Buccaneers and New York Giants.

5-FORREST LAMPAs a four-year starting left tackle, Lamp anchored a line that was the foundation of one of college football’s most prolific and most dynamic offensive attacks.

A 6-foot-4, 309-pounder out of Venice (Fla.) High School, Lamp’s combination of strength, quickness and speed earned him recognition as one of the game’s most complete offensive linemen.

As a senior in 2016, Lamp was selected as an Associated Press third-team All-American.

In the 2017 NFL Draft, the San Diego Chargers selected Lamp in the second round, and he was the 38th overall pick.

He remains with the Chargers, but injuries — including a torn ACL and a broken fibula — have plagued his professional career.

6-JACK DOYLEAn Indianapolis prep star, Doyle was the first in a succession of standout WKU tight ends in the decade.

The 6-foot-6, 262-pounder set a WKU freshman record in 2009 with 37 receptions and his overall game continued to develop at a rapid pace over the next three seasons.

Doyle was regarded as an outatanding blocking tight end, with running backs Rainey and Andrews became the primary beneficiaries.

7-TYLER HIGBEEA native of Clearwater, Florida, Higbee was signed by WKU as a wide receiver but was converted to tight end early in his collegiate career — and it led to stardom.

Higbee was fourth round selection of the Los Angeles Rams in the 2016 NFL Draft.

Prior to the 2019 season, Higbee signed a four-year $31 million contract and promptly earned his pay by producing the best season of his career.

Last fall for the Rams, Higbee caught 69 passes for 734 yards and three touchdowns, and was one of the hottest receivers in the league over the final six games.

8-MIKE WHITEFollowing two mediocre seasons at South Florida, White came into his own as a superstar quarterback for the Hilltoppers — leading WKU to the 2016 C-USA championship.

The following season, White’s strong right arm was even busier as he completed 368-of-560 passes (.657) for 4,177 yards and 26 touchdowns, with only eight interceptions.

White was selected by the Dallas Cowboys in the fifth round of the 2017 NFL draft. Dallas waived him in 2018, and he was signed by the New York Jets.

9-DEANGELO MALONEA native of Ellenwood, Georgia, Malone is preparing for his senior season at WKU after a highly productive junior campaign.

In 2019, the 6-4, 225-pound defensive end finished with 99 tackles and was among the national leaders with 11 sacks totaling 96 yards lost. He was selected to the Ted Hendricks Award watch list and emerged as the C-USA Defensive Player of the Year.

In three seasons for the Hilltoppers, the All-American candidate has produced 184 tackles, 18.5 sacks, and has one interception.

In early January, Malone announced that he would forego the NFL Draft and return to Western for his final collegiate season.

10-JOEL IYIEGBUNIWEA hometown product out of South Warren High School, “Iggy” become a major force over the course of his three-season career as a Hilltopper.

The 6-1, 230-pound linebacker finished with 201 total tackles in his career, including 117 in his dominant juniors season, which saw him earn first-team All-C-USA recognition.

Following his junior season, Iyiegbuniwe declared for the 2017 NFL Draft and the Chicago Bears made him a fourth-round selection. In his first two pro seasons he registered 13 tackles in a backup role.